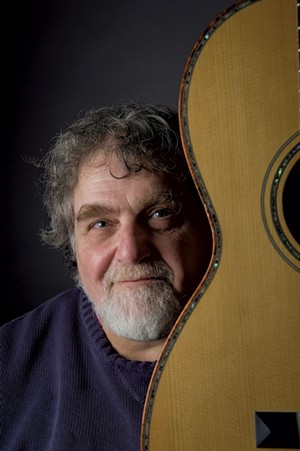 Robert Resnik might be best known as the host of "All the Traditions," the freeform Vermont Public Radio show devoted to local and regional music — folk and traditional especially — that he's helmed for 23 years. A respected critic and scholar, Resnik has also reviewed music for numerous publications, including Seven Days. In 2013, he wrote a book detailing the Queen City's rich history, musical and otherwise, called Legendary Locals of Burlington. He's an equally accomplished performer, a multi-instrumentalist with countless credits both live and recorded. And until last year, he was the codirector of the Fletcher Free Library in Burlington, where he worked for 28 years before retiring.

While Resnik would modestly tell you he's simply followed his heart all these years, his dedication to Vermont music and culture has been immeasurable. And his efforts have recently been acknowledged in a big way.

On Tuesday, Resnik received the sixth annual Herb Lockwood Prize in the Arts, a cash endowment of $10,000. Local resident Todd R. Lockwood and his family created the prize — the largest arts-specific award in the state — in honor of his late younger brother. It is intended to "reward the pinnacle of arts leadership in a state blessed with creative energy disproportionate to its population." Says Lockwood of Resnik: "Many area musicians feel a debt of gratitude for the work Robert does on their behalf. This makes him a natural choice for the Herb Lockwood Prize."

Seven Days spoke with Resnik about the prize, living with Parkinson's disease and what a life devoted to music has given him.

ROBERT RESNIK: Thank you! It's so sweet of them. I almost passed out when I found out. It makes me feel lucky, indeed.

SD: I mean, just on the sheer body of work you've amassed alone...

RR: True, though I also think a lot of the appreciation is for my 23 years on the radio. That's where most of my influence is, really. Most of Vermont wouldn't know me from Adam but for the show.

SD: So how did you get that gig?

RR: My friend Doug Jaffe was working at VPR back then. He rang me up and told me they were looking for someone to host a show about folk music. I was up against something like 30 other applicants, but they chose me! And I think they did so because I told them, "Look, I have no preconceptions of how this is going to go, but I can tell you that I'm going to play some great music. And I'm going to focus on Vermont music." And that was my ace in the hole, honestly.

SD: You started in radio much earlier though, correct?

RR: Yes! I cut my teeth in high school listening to WFMU in East Orange, N.J., which was freeform radio. So in September of 1970, when I got to UVM, the first thing I did was go down to the station [WRUV 90.1 FM], which was in a barn behind Pomeroy Hall. I just about flunked out and got my ass sent to Vietnam because I spent all my time there! I had a show for years called "The Shirley Temple Show." Of course, it wasn't the same as "All the Traditions," but you could recognize it was my show. Because it's the only show I know how to do!

SD: Why do you think people have gravitated toward you as a DJ?

RR: I'm realistic [enough] to know I'm basically listening to music with friends, so I try not to talk too much. You can give little interesting factoids, but you need to let the music do the work. I'm not what's interesting — the music is. I'm a vessel. It's a gift I was born with, and I just try to pass it on.

RR: For me, absolutely. I grew up singing songs in the car, learning radio jingles. I was one of those kids who could sit down at a piano and pick out a melody. The Force runs deep in my family. My great-grandfather played clarinet in the Russian military, my brother-in-law plays woodwinds, my uncle plays woodwinds, my aunt plays woodwinds, and so do I, actually. My first instrument was clarinet. Full circle! [Laughs.]

SD: Do you find it difficult being on both sides of the equation, musician and critic?

RR: It's hard, for sure. One time I was reviewing a record — real wimpy, new-age stuff. You can't really listen to that stuff while you're driving because you might fall asleep and crash into a tree. I wrote something to that effect, and the artist sent me a message saying, "How could you do this to a fellow musician?" So now I try to write in code a little bit. I reserve the term "clinically accurate" for two or three specific musicians that drive me crazy.

SD: How has being diagnosed with Parkinson's disease affected you musically?

RR: Well, I'm a little clumsy with my hands now. I'm also doing the Brian Wilson thing, which means I'm not playing as much as I used to. But I still play with friends a few times a week. I'm resisting eliminating any of my instruments, but eventually, if I can't play them, I'll get rid of them. My sons are both very musically talented, and I have two acoustic guitars I'm going to give them at some point.

SD: What does winning the Lockwood Prize mean for you?

RR: It's unbelievable. I'm just so pleased and lucky. I've been blessed. My mother told me never to make music to make money, and she was sort of right. I have a nice city pension that allows me to retire, so [the award] is very much like pennies from heaven for me. In a way, I want to pass some of it along to my friends who are struggling musicians — which I may do.

SD: As the first musician to win the prize since it was introduced in 2014, do you feel a sort of validation for your lifelong commitment to music?

RR: You know, I've been doing what I love pretty much all along. I spent a lot of time watching my father do things he didn't like for a living. It taught me not to do that. Besides, with me, it always comes back to music. I can't help it! It's what I'm made of. I'm made of musical notes!

"All the Traditions" airs Sundays at 7 p.m. on Vermont Public Radio. vpr.org.