After more than a year of virtual performances, Vermont Youth Orchestra flutist Logan Crocker stepped onstage in front of a live audience on October 17 at the Spruce Peak Performing Arts Center in Stowe. The Colchester High School senior was too excited to be nervous, he said: "It was such a nice feeling to be back in front of an audience. You could feel the energy."

This is Logan's second season playing flute and piccolo with the Vermont Youth Orchestra. At the Spruce Peak concert, after months of determined practice, he played the first movement of Mozart's Flute Concerto in G Major — his first performance as a soloist. "It was such a fun experience," he said. "I was proud that all my hard work had paid off."

Logan is one of more than 300 young musicians across the state who will participate in music programs through the Vermont Youth Orchestra Association this school year. Founded in 1964 and headquartered at the Elley-Long Music Center at Fort Ethan Allen in Colchester, the nonprofit seeks to inspire young people "as artists, citizens, and leaders through the joyful shared pursuit of musical excellence."

VYOA offers an array of opportunities for students in grades 1 through 12. The most advanced musicians play in the VYO. But there are opportunities for kids to perform at every level — in beginner groups such as Prelude, for string instrument players in grades 2 through 5; in the Da Capo wind, brass and percussion ensemble; and in the Vermont Youth Philharmonia, an orchestra that feeds the VYO, and where Logan started in 2019.

The VYOA also offers a weeklong summer symphony camp and private lessons. Students come from all over the state to take part in them.

Meeting other musicians is part of the appeal, Logan explained: "Everyone there loves music, and it's really fulfilling to come together with other players who have similar interests as you."

Logan confirmed that the commitment and repertoire are more demanding than playing in his high school band. But he plans to pursue music performance in college and believes the extra effort is worth it. "With VYO," he said, "I find that I'm challenged every week. It helps me learn to be confident in myself." 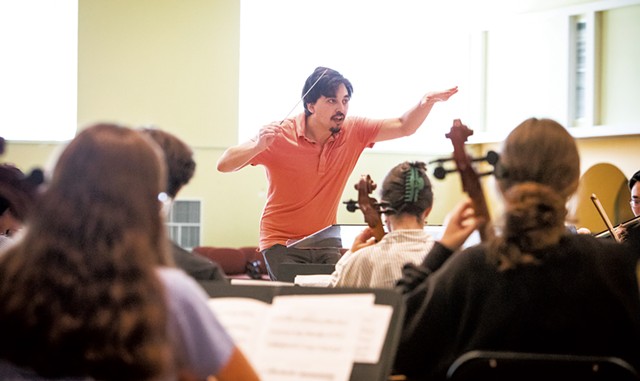 The chance to work with and inspire students such as Logan is what drove Mark Alpizar to apply for the VYOA's music director job in 2020. Alpizar's prior experience included assistant conductorships with the Cleveland Pops Orchestra and American Youth Symphony. But when he was offered the VYOA position in July of last year, it "felt like winning the jackpot," he said.

Alpizar particularly enjoys teaching young musicians. "The biggest draw to working with youth is, you get to experience things with them for the first time," he said.

There were a lot of firsts over the last year as the VYOA tried to keep students playing together in the midst of the pandemic.

The organization used strict safety protocols and creative thinking to keep practicing in person: Members worked in smaller groups; held shortened, socially distanced rehearsals; wore masks; and played with fabric "bell covers" on the end of their horns. Not seeing friends as often or rehearsing as a full orchestra was a challenge, but many students used quarantine to hone their craft, Alpizar said.

This year, vaccines have allowed for in-person concerts, and Alpizar is thriving on the freedom he's found working with the students at VYOA. "I can put [the orchestra] in nontraditional setups, take fun musical risks and explore different repertoire."

The groups do occasionally dip into pop music, performing numbers such as "Smoke on the Water" and the theme from The Avengers. Next year, Alpizar hopes the VYO will perform the soundtrack for a silent film. "We need to think outside the box," he said.

That also means broadening the reach of the group. Alpizar and his staff are committed to attracting students from all backgrounds and making participation affordable.

Tuition varies by program; for the VYO, it's $1,875 for this season. VYOA offers need-based financial aid for students to defray the cost. It also offers subsidized lessons for "endangered instruments" such as French horn, trombone or bassoon, which are less popular among orchestra members.

"VYO was a great reward after so many hours practicing on her own and gave her so many opportunities to grow," Barker said. "She got to play with different conductors. She encountered new music. She got to be a leader and a follower. And the concerts were also a reward for us as parents."

Logan loves them, too. He's excited for VYOA's upcoming holiday-themed OrchestraPalooza on December 12 at the Flynn Center in Burlington. The event features all of VYOA's ensembles and includes a grand finale in which all the musicians share the stage.

"It's really exciting to think that our concerts will once again be at the Flynn," Logan said. "The holidays are one of my favorite times of the year, and I am especially excited to play 'Sleigh Ride' this year with the combined orchestras."

See OrchestraPalooza on Sunday, December 12, 4 p.m., at the Flynn in Burlington. $15-20. Proof of full vaccination or a negative COVID-19 test required; children who are ineligible for vaccines must wear a mask.

Vermont teen composers had their own moment in the spotlight this fall. The Vermont Symphony Orchestra worked with Jordanian Canadian composer Suad Bushnaq to develop the Masterclef competition, which invited teens to riff off of a short melody from Bushnaq's cello concerto for orchestra called "Sampson's Walk on Air."

Organizers received 25 entries and chose 13 finalists, all of whom participated in a workshop at Burlington City Hall's Contois Auditorium on October 29.

One by one, they stood up to present their musical creations to an audience of three dozen people, including a panel of three judges — Bushnaq herself, Vermont Symphony Orchestra creative projects chair Matt LaRocca and accompanist Randal Pierce. The students' scores were projected on the big screen as the audience listened to each composition.

"I was jamming to your piece when I listened to it the first time," said Bushnaq, who compared the competition to the cooking show "Chopped."

"We gave you pasta, tomato sauce, cheese and pesto, and everyone makes a savory dish — and you decided to make a dessert," she said.

Another sophomore from Montpelier High School, Callum Robechek, recorded found sounds on their phone from a water fountain and built a composition that Bushnaq described as "therapeutic."

"Putting in these little Easter eggs for your listeners that are mind-blowing — it's part of the composer really respecting the intelligence of their audience," she said.

The grand prize of $250 went to violinist Chase Ehrlich, a sophomore at Montpelier High School. The two runners up were Maddox-White and Maaike Dam, a sophomore at St. Johnsbury Academy; both received $125. All three walked away with a "composer's bundle" that included an orchestration notebook and other helpful tools for the craft.

"I was really blown away by the level of talent and how brave the composers were, really bringing their own voice into their creations," said Bushnaq. "Things like this have a value that's much higher than who wins. This competition was to make these kids inspired by each other."

Listen to the finalists' entries here.

The original print version of this article was headlined "Together Again"