Musical Notes: A Haven for Young Musicians in Weston

Amal Biskin has been playing the violin since age 5. Her parents, both musicians, required it. "It was as fundamental and obligatory as doing my homework or brushing my teeth," she said. A New York City native, her training included private lessons and attending an intensive music school from kindergarten through eighth grade.

In 2017, when she was 14, she learned about the Senior Session at Kinhaven Music School in Weston — a unique six-week immersive experience for top-notch young musicians like her.

At first, Amal was skeptical. She'd spent two weeks at a music camp the summer before and found it "full of fiercely competitive 13-year-olds, harsh teachers and exclusive social cliques." She worried that she wouldn't enjoy a month and a half in an environment like that.

Fortunately, that's not what she found at Kinhaven. When she arrived in Weston, students and faculty both greeted her with "overflowing warmth and enthusiasm," she said. "I could tell I was in a very different place."

Indeed, Kinhaven is a music camp that marches proudly to its own beat.

Situated on a 31-acre former dairy farm, Kinhaven specializes in classical chamber music, orchestra and piano education. Students live, rehearse and perform on campus. The school hosts a variety of musical programs each summer for middle and high school students, as well as adults, though it's perhaps best known for Senior Session, attended by 100 elite-level high school musicians from across the country. The students who come to Kinhaven are serious musicians, and around 70 percent go on to study music in college, often at prestigious programs such as the Juilliard School, the Curtis Institute of Music and Manhattan School of Music.

It's tough to get into Senior Session, said trombonist Anthony Mazzocchi, who has codirected the program with his wife, violinist Deborah Buck, since 2011. Around 40 of the 100 slots are filled by returning students — once they're accepted, they don't have to apply again. That leaves just 50 to 60 slots open to newcomers, and hundreds apply each year.

But while each student has to pass through a competitive audition process, "that's where the competition ends," Mazzocchi said. Instead of a Hunger Games-style competition or the brute-force teaching methods depicted in films like Whiplash, Kinhaven gets the best out of its young musicians by focusing on community, collaboration and fun. 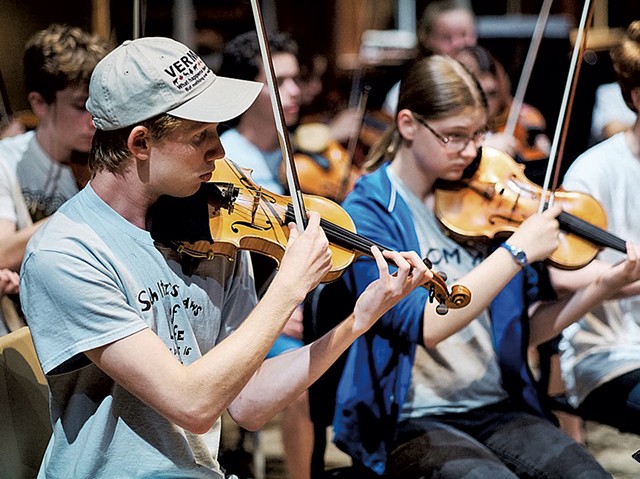 This approach has been part of Kinhaven's mission since it was founded in 1952 by pioneering music educators David and Dorothy Dushkin. The couple established the School of Musical Arts and Crafts, now known as the Music Institute of Chicago, before moving to Vermont. They remodeled the old barn on their property into music studios and living quarters for the original cohort of 13 students. The Dushkins envisioned an immersive musical experience centered on singing and chamber music — classical music that's performed by a handful of players rather than a full orchestra. They believed that students, set free from the stresses of their daily lives and surrounded by open air and blue skies, could thrive there.

That was true of Amal, who spent three summers at Kinhaven. She said playing chamber music with her peers was transformative. "It enabled me to discover a new relationship with music that was completely unique to me and no longer connected to my parents or my school," she said. And being surrounded by other musicians in this idyllic setting helped her discover "the delight and camaraderie of playing music ... I realized that it was something that could bring me closer to people, rather than forcing me into a practice room alone for hours every day."

At Kinhaven, students spend at least four hours a day playing music. But after morning rehearsals and lunch, they can hit the pottery studio or the tennis court, or walk two miles into Weston to buy candy at the Vermont Country Store. Softball games, swimming and spontaneous folk dancing are part of the experience, too.

Some Kinhaven first-timers are surprised by how much time they spend without their instruments in hand. For example, each evening closes with all the students (and some faculty) gathered together outside to sing a set of madrigals and Bach chorales together.

New Jersey native and three-time attendee Gabriel Roth, a current first-year at Oberlin Conservatory of Music, said students singing together under the stars "is probably my favorite Kinhaven tradition. You hear beautiful music waft over the campus and see a tightly knit community of music lovers making music together."

Mazzocchi called it "the most magical part of the camp."

Cellist Frida Rahmani, in her first year at Purchase College at the State University of New York, admits that, as a 17-year-old, she was embarrassed by displaying vulnerability. "The thought of my singing voice being heard or people seeing me dance genuinely sent chills down my spine," she said. "But in the end, I miss the singing and the dancing just as much as I miss the orchestra and the chamber music, if not more."

Those activities make the demanding musical education more bearable. Students work extremely hard to perfect each week's chosen scores. Performances every Friday and Sunday are open to the public. Mazzocchi said that by the time students leave, they've performed six orchestral works and up to 10 or 12 chamber pieces. "It's very intense," he said.

Kinhaven's focus on chamber music helps students become better overall musicians, said faculty member Carolyn Wahl, who plays French horn with the Florida Orchestra. In a chamber music setting, "You have to listen. You have to adjust. You have to move together," she said.

Most faculty members, like Wahl, teach in universities or play in professional orchestras and chamber ensembles. Many have been Kinhaven instructors for decades. At Kinhaven, they work closely with students, getting to know them musically and personally. Students and faculty eat meals together, help clean the facilities side by side, and even just hang out.

This kind of instruction isn't cheap. Though tuition went up this year for the first time in a decade, 2022's all-inclusive cost for the six-week Senior Session is $7,200. During his tenure as codirector, Mazzocchi has worked to make Kinhaven more accessible. Need-based financial aid is available. Mazzocchi and Buck have also developed partnerships with organizations in Chicago, New York and Los Angeles to enable more students to attend. Roughly 20 percent of Kinhaven attendees are now students of color. Kinhaven doesn't attract a lot of local students, though; just a handful each summer hails from Vermont.

Though Kinhaven was forced to cancel its 2020 session due to the pandemic, students returned last summer and will be back again in June.

Mazzocchi said being on campus there provides relief from the stress and fatigue of daily life in a pandemic. "The world needs places like Kinhaven more now than ever before," he said.

Amal, who's now a first-year at Yale University, said her experiences at Kinhaven were nothing short of life-changing. "I saw myself transform from a shy 14-year-old to an outgoing rising college freshman who took younger students under my wing (just as the graduating seniors did for me)," she wrote in an email. She went "from a single individual to a part of something much larger than myself."

That's what Kinhaven is all about.