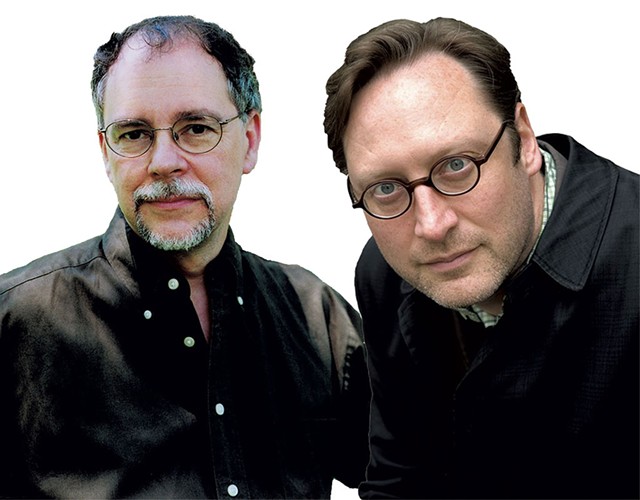 The last time author M.T. Anderson organized an event that combined live classical music and a reading — of his book Symphony for the City of the Dead: Dmitri Shostakovich and the Siege of Leningrad — the venue was packed to overflowing. For his latest offering in this vein, Anderson and organizing sponsor Bear Pond Books in Montpelier have wisely snagged a bigger venue: the main room of the Vermont College of Fine Arts chapel.

There, audiences who like their arts mixed will be regaled with "Music for Barns" this Sunday afternoon. The adventurous program alternates selected readings from American writers of the rural — John James Audubon, Robert Frost, Jane Smiley and E.B. White among them — with excerpts from American folk, fiddle, hymn and other music fit (if not composed) to be heard in barns.

The readers are Anderson, who recently moved to East Calais, and part-time Vermonter Gregory Maguire, who wrote Wicked, the book on which the Tony Award-winning Broadway musical is based. Anderson won the National Book Award for his young adult novel The Astonishing Life of Octavian Nothing, Traitor to the Nation. (Neither author's writing is on the program.)

A string quartet made up of four members of the Boston-based Aurea Ensemble will play the music. Two will be familiar to Vermont audiences: violinist Katherine Winterstein and violist Consuelo Sherba, both members of the Vermont Symphony Orchestra.

Anderson originally put together "Music for Barns" for a June concert at Twenty Summers, a music series held in a restored barn in Provincetown, Mass. (The author curates literary concerts once a year for the series.) As he spent time in Vermont, however, he discovered a surprisingly strong tradition of shape-note singing, he says in a recent phone conversation. Anderson — who has sung with shape-note groups in Plainfield and Montpelier — soon realized a repeat program would interest plenty of Green Mountain residents.

The author has a formidable grasp of both music and musical history, and a knack for capturing music in words. All help make Anderson's program notes for Sunday's concert nearly as gripping a read as Symphony. In what amounts to a small musical treatise, he proposes that the literary and musical works both "suggest a nostalgia for something simple and fine that is lost, an Edenic homeland that may never have existed."

Aaron Copland may be the first composer this description brings to mind, but Anderson skips the obvious and unearths a more rarified strain in U.S. musical history. His program choices range from hymns by 18th-century Randolph resident Justin Morgan — yes, the horse breeder was also a composer — to the 1982 fiddle tune by Jay Ungar that Ken Burns used to such effect in "The Civil War."

Each musical work is an effort to, well, make the country great again, Anderson argues, though not in so many words. Yale undergraduate Charles Ives fashioned his first string quartet (1898-1902) from gospel hymns to stick it to the educated, who thought themselves beyond America's rustic traditions. In the 1970s, John Cage hailed the country's bicentennial with his own minimalist versions of 18th-century tunes in 44 Harmonies From Apartment House 1776. (The program includes four of those harmonies.)

In Anderson's reading, the music selections seem bathed in the "light of late afternoon" evoked by Jane Kenyon's beautiful, nostalgic poem "Let Evening Come," one of the literary works on the program.

Anderson says he hopes his program of "musical Americana" addresses the question: "How do you use the tradition of rural American music-making in a modern age?" "These are reflections of what it means to be American, and also reflections of how we can use that going forward," he says. Timely musings, indeed.