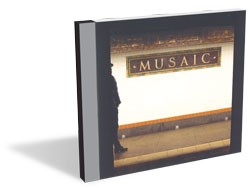 There’s a revival of the Motown Sound afoot, and bassist Ben Kogan’s band Musaic fits right in. Kogan quickly grew some soulful roots after moving last year from Boston to New York City and founding this neo-soul quartet. And, having heard their self-titled debut EP, I believe Musaic can, at their worst, replicate a timeless, bluesy rock crawl. At their best, they’re out to further a few vintage soul grooves — say, Harold Melvin and the Blue Notes — with likable nods to rock thrown in.

Kogan’s versatility lends Musaic’s grooves authenticity. The veteran bassist majored in the instrument in college. Most recently, he provided the low end for electrified blues-rock outfit Hey Mama — an evolution of expatriated VT acoustic duo Avi & Celia — as well as for a jazz group, Modus Operandi. But Musaic resembles none of these. Rather, the band seeks to find its own mix of soul beats and rock chords. Busy people come up with interesting projects, and Kogan is no exception.

Singer Jermaine Hardy sounds a bit like a baritone Teddy Pendergrass. He discovers his own vocal riffs among the instruments, using words written mostly by Kogan. But he sounds only tenuously at ease with each passing verse. One imagines this may be less of an issue in concert, where he can feed off the energy of a crowd, singing soul live to live souls.

I am most glad for Melton’s keys, including his smart use of the Hammond. A few choice notes ring out on the EP — often building in volume and harmonics. On “Try So Hard,” Melton shows off his gospel-inflected block-chord piano chops. His simplicity works well on the Rhodes, too.

Conley plays decently; his biggest strength may be his ability to emulate styles. He could sound simply like founding Blues Brother Steve Cropper, but his tones and chord thrashing sometimes hint at his own jam-band inspirations. Conley takes a few interesting solos, but more such forays are in order. As with Hardy and his vocals, being onstage will most likely serve the guitarist well. Because, at the very least, Musaic is the kind of band one wants to see live, where they can be big, loud, dramatic and fun — and, for these reasons, undeniably soulful.

Catch Musaic this Thursday at Langdon Street Café in Montpelier and Friday at Burlington’s Red Square.