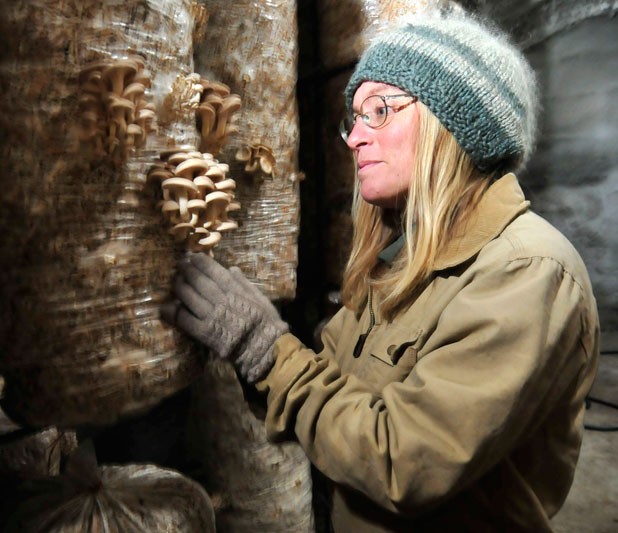 Kris and Glenn Coville’s house isn’t exactly the picture of tidiness. Children’s bikes and toys are strewn on the lawn. Bits of farm detritus share space with furniture on the tumbledown homestead’s wraparound porch. Inside, the kitchen table is covered in papers, school books, craft projects and an electric guitar. The corner of the living room holds a prodigious mound of snowboarding equipment belonging to the couple’s three boys.

But walk around the side of the house to the Covilles’ newish barn, and you’ll see not a piece of equipment out of place. The hulking space, built five years ago to house the couple’s mushroom-cultivation business, has to be pristine. While mushrooms are hearty and adaptable, they’re sort of neat freaks when it comes to growing.

The Covilles, who began Wild Branch Mushrooms in Craftsbury in earnest four years ago, are part of a growing agricultural mini-movement in Vermont. Over recent years, the interest in growing mushrooms for culinary and medicinal purposes has, well, mushroomed.

Food co-op classes on DIY mushroom cultivation typically sell out. And those who sign up are not just looking to grow the psychedelic kind. The classes draw a broad cross-section of people drawn to the mushroom’s earthy mystique.

Not only are mushroom hobbyists growing in number, but more of them are cultivating fungi commercially for restaurants and markets. According to the Northeast Organic Farming Association of Vermont, the state has four organic mushroom cultivators who produce mostly shiitake and oyster varieties. At least four more growers are not certified.

Local mushroom grower Alissa White sees this wave of interest as part of the larger grow-your-own trend that focuses on food security and self-reliance. Plus, she says, mushrooms are special — intriguing and mysterious.

Anyone who has taken a walk in the Vermont woods knows the region is rife with wild mushrooms. While our forests aren’t as temperate as those of the Pacific Northwest, where mushrooms flourish in the wet climate, they offer enough in the way of moisture, light and nutrients for fungi to live comfortably. Maitake, reishi, pheasant back and morel varieties abound, and foraging is a popular seasonal activity.

But not every mushroom enthusiast wants to spend hours traipsing through the woods in hopes of hitting the fungi jackpot. Growing mushrooms is a way for aficionados to get their fix without leaving the comfort of their own homes. And maybe to make a little cash along the way.

Mushrooms propagate in two ways — through spores and mycelial networks — but mushroom growers usually use the latter to get started. Mycelium is a “fungal network of threadlike cells,” writes mushroom guru Paul Stamets in his book Mycelium Running: How Mushrooms Can Help Save the World. If you see a tree with patches of white fuzz, that’s mycelium that will someday turn into a mushroom.

To grow your own mushrooms, you need spawn — any material impregnated with mycelium, such as grain, sawdust or small wooden dowels. This is mixed with substrate such as pasteurized straw or logs, which provides the food the fungi needs to grow and fruit.

Glenn Coville, who cultivates mycelium and concocts his own spawn, grows tree oysters on straw. White uses logs filled with mycelium plugs. Still others, such as Eric Swanson, owner of the Bristol mushroom farm Vermush, teach people how to grow mushrooms using rolled-up cardboard. As long as the food source is clean and uncontaminated, the mycelium should take.

Swanson, a wildcrafter and cultivator, is obsessed with mushrooms. He’s not really into them for their gastronomic value, though he’ll eat them occasionally if they’re not too “earthy.” Rather, Swanson loves mushrooms for their extreme biological efficiency.

“Corn can grow a couple of ears in five months. With mushrooms, they can take four to six weeks to fruit, and then you can harvest them again a few weeks later,” he says.

Some varieties, such as shiitakes, can take up to a year to fruit but will continue bearing fruit for as long as six years. Others, like oyster mushrooms, can take just a month or two to sprout.

Swanson has been involved in the mushroom trade for 15 years. He began as a wildcrafter and progressed into cultivation because he preferred to harvest year round. Cultivators also don’t have to worry about picking something poisonous by mistake.

The first mushroom variety Swanson grew was a pink oyster. Oyster mushrooms tend to be considered a beginner’s fungi with, he says, “almost no failure rate.”

Over the years, Swanson has tried his hand at growing blue and gold oysters, shiitakes, lion’s mane, and reishi mushrooms. He’s also attempted to grow maitakes, or hen of the woods mushrooms, but that variety is tricky, he says.

“People are under the assumption that growing mushrooms is so difficult,” Swanson says. “But the thing that’s challenging is sterility” — that is, keeping out contaminants.

That’s not a problem for the Covilles’ operation. The inoculation room in their mushroom-cultivating barn features a laminar flow head — an air-filtration device that prevents contamination — and an industrial autoclave to sterilize the grain.

The barn is the nerve center of the couple’s enterprise. In this laboratory-cum-packing plant, Glenn Coville creates cultures of tree oyster, garden oyster and king Stropharia mushrooms.

In one dimly lit room, stacked petri dishes hold clones of Wild Branch’s more successful flushes. Once the mycelium grows out of the petri dishes, it joins the grain in the sterile inoculation room to create spawn.

About 100 feet from the barn stands the mushroom cave. This concrete structure, equipped with skylights and a watering system meant to mimic the forest environment, will be home to the fungi as they go from spawn to fruit.

Inside the cave, prim towers of bagged straw inoculated with spawn stand in rows. Many of the bags are fruiting, and great flushes of oyster mushrooms that look like inside-out umbrellas push through the plastic.

Kris Coville walks the rows, plucking off mushroom blooms that are ready for harvest. The couple will sell the oyster mushrooms, along with medicinal mushroom-infused maple syrups, organic root crops, wool and crafts, at the Burlington Winter Farmers Market, among others.

White, who lives in Burlington, doesn’t cultivate commercially. But she’s no less knowledgeable about the science of growing mushrooms. Her first foray was as a student at the University of California, Santa Cruz. One of her senior projects was designing a permaculture demonstration slope on campus, including a mushroom-growing section meant to evoke a food forest. The project sparked White to continue growing mushrooms for fun.

Mushrooms appeal to White, she says, because they provide food not just for us but for plants. They help enrich the soil by building humus — the dark brown or black layer of organic matter that feeds vegetation. Cultivated between crop rows, mushrooms can enhance garden yield by keeping the soil healthy and balanced.

White, who sees mushrooms as an integral part of a holistic ecological system, says they can easily be mulched into a garden. The more mulch gardeners lay down, the better they feed the mushrooms — and, ultimately, themselves.

For those who undertake it commercially, mushroom growing can be a viable proposition, though no one’s getting rich off fungi. Locally, fresh oyster mushrooms sell for about $12.99 per pound. Fresh local shiitakes go for between $12.89 and $15.49 per pound. Local dried varieties can range in price from $60 to $150 per pound. Markets for culinary mushrooms abound in the region, assuming the product is good.

But for those who grow for their own consumption, the rewards are palpable. Over the years, White has grown tree oyster, elm oyster, shiitake, reishi, king Stropharia and maitake mushrooms. With every edible variety she produces, she conjures new ways of preparing them.

“I want to grow mushrooms that I like to eat,” she says.

Combine beans and spices in a large sauce-pan, add water to cover amply, and simmer for 30 to 40 minutes until beans are tender and most of the water has cooked off. (If the water does not cook off, simply scoop it out toward the end until a thick soup consistency remains.) Slice mushrooms and add toward the end along with plenty of salt and freshly ground black pepper. While beans are cooking, drizzle a large roasting pan with olive oil and arrange squash skin side down. Cook at 400 degrees for about 40 minutes until fully tender when pierced with a fork. Remove from oven and set right side up in four soup bowls. Spoon maple syrup into each squash half and serve with a generous scoop of bean soup. Recipe courtesy of City Market/Onion River Co-op, Burlington. www.citymarket.coop

In a very large skillet, heat olive oil until hot. Add mushrooms. Let sit for a minute before stirring to let mushrooms brown (this gives them lots of flavor). Toss mushrooms and sauté until tender. Add shallot and thyme, and season with salt and pepper. Cook one minute more; set aside. In a large pot, combine milk and water and bring to a boil. When boiling, slowly add the polenta, whisking constantly to avoid lumps. Continue whisking. When polenta boils, reduce to a simmer and cook until thick but still creamy (like Cream of Wheat), about 10 to 15 minutes. Whisk constantly, scraping the bottom to avoid lumps and scorching. Remove from heat and stir in the Parmesan cheese, butter and mushroom mixture. Season with salt and pepper and serve immediately.

Chicken of the Woods (Laetiporus sulphureus) — Shelf-shaped, brightly colored from yellowish to reddish orange. Grows on hardwoods, particularly oak, in the eastern United States. Has a nutty fragrance and a chicken-like flavor.

Enokitake (Flammulina velutipes) — Japanese for “the snow peak mushroom.” Long, yellowish stems and small white to yellowish caps. Best if cultivated on hardwoods such as oak, alder, beech, etc. Can be cultivated on some softwoods, such as white fir. Has a light texture and mild flavor. Often used in soups.

Garden Giant (Stropharia rugoso- annulata) — Also called king Stropharia. Massive species. Can grow to be five pounds in weight and two feet in diameter. Reddish brown. Toothlike decorations below cap. Best if grown on a bed of wood chips. Shouldn’t be eaten more than two days in a row.

Maitake (Grifola frondosa) — Japanese for “dancing mushroom.” Also called hen of the woods for its feathery appearance. Dark gray with multiple, overlapping, petallike caps. Forms from buried wood. Flesh is thick and dense. Can be dried and made into a medicinal tea.

Nameko (Pholiota nameko) — One of the most popular cultivated mushrooms in Japan. Surface of nameko is covered with orangish, glutinous slime. Once slime is cooked off, mushroom has crunchy texture and nutty/mushroomy flavor.

Shiitake (Lentinula edodes) — Most popular gourmet mushroom. Cultivation began around the 10th century. Dark brown cap, fibrous stem. Prefers hardwoods and can produce for as long as six years. Tearing shiitakes instead of cutting them up before cooking preserves the flavor. Very shelf stable.

Turkey Tail (Trametes versicolor) — One of the most common mushrooms in the world. Purplish, grayish-brown flattened caps, often in large overlapping clusters. Tough and leathery. Grows well with reishi mushrooms. Best used in soups and teas.