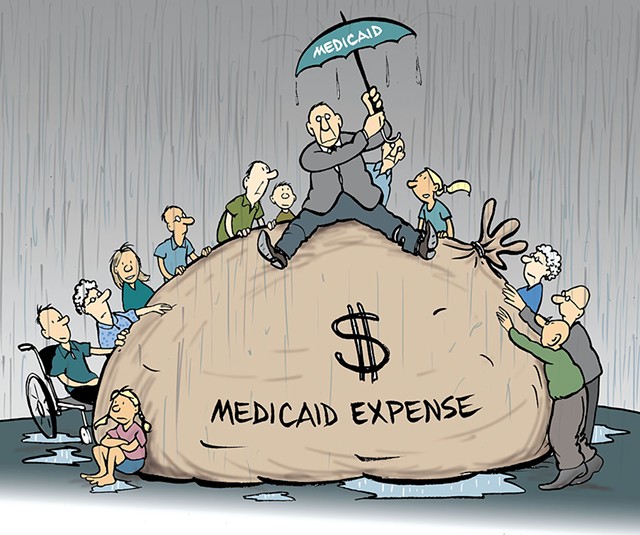 Medicaid, a 50-year-old government health insurance program for the poor and disabled, is in the crosshairs of some state policy makers because of its skyrocketing cost. In the past five years, total spending for all the services tucked under Vermont's Medicaid umbrella rose $366 million. The state and federal governments share the annual cost, which came to $1.7 billion last year. Of that, Vermont paid $738 million.

Since last spring, expenses are up by $51 million. The state's share of that increase is $22.9 million. That has many lawmakers crying, "Budget crisis!"

Democrats and Progressives are also worried about the program's cost.

"We have so many questions," said Senate Appropriations Committee chair Jane Kitchel (D-Caledonia), adding that she isn't sure the Shumlin administration has the data to answer all of them. "Without the data, it is really hard to pick a course of action."

The legislature's money and health-policy committees scheduled Medicaid briefings during the first week of the 2016 legislative session. "It is high time that we fully digested all the details of the program," said House Health Care Committee vice chair Chris Pearson (P-Burlington). "We need to understand what the options are."

The biggest driver of the Medicaid cost increase is Obamacare. The 2010 federal health care law forced Vermont to dismantle two of its own insurance initiatives — the Vermont Health Access Program and Catamount Health. People covered by those programs moved to either Medicaid or private insurance offered through Vermont Health Connect, the online insurance marketplace mandated by federal law. Obamacare also changed Medicaid eligibility requirements and fined people who remained uninsured.

Years ago, the Shumlin administration and the legislature's financial advisers worked together to predict the consequences of the health reform law and came close to pegging the total number of people who would become insured. But they miscalculated how many of those would be on Medicaid versus subsidized private insurance. Instead of having 47,000 Vermonters privately insured with state aid to help them pay premiums, the number turned out to be closer to 17,000. Adult enrollees in Medicaid didn't number 46,000, as projected, but a whopping 70,000. As a result of the increased caseload, the legislature's financial advisers predict Medicaid will cost an additional $90 million next year, of which about $30 million would be state dollars.

Most individuals on Medicaid pay no monthly premium for health coverage and tiny co-payments for outpatient visits and prescriptions. That amounted to a better deal for Walter Carpenter of Montpelier. The 60-year-old had private insurance through an employer until he became ill in 2006. "I had liver disease caused by gallstones in a bile duct," he said. "I was two steps away from the grave when an MRI found out what was wrong."

He lost his job and his health insurance as a result of his lengthy recovery, he said. "I was uninsured maybe a year." After surgery to reopen a bile duct, he faced a $20,000 bill but negotiated with the hospital for a reduction to $9,000. Still, he said, "I was in debt for years."

The staff at the People's Health & Wellness Clinic in Barre, which offers free care to the uninsured, suggested that Carpenter apply for coverage under Catamount or VHAP. He bounced between those two programs depending on how much he earned from his two seasonal jobs. He works summers at Waterbury Center State Park and winters at the ski lodge at Mad River Glen.

In 2014, when Catamount and VHAP ended, Carpenter said, he received a notice that he now had coverage under Medicaid. It meant that last year, when his doctor advised hernia surgery, he could have the procedure. He now gets annual blood tests to monitor his liver health.

"I don't abuse the program," said Carpenter, who has a thick cap of graying hair and a bushy mustache. "It allows me to have a doctor without worrying about going into medical debt."

Carpenter is not alone. A change in the income rules opened Medicaid's door to uninsured farmers, small-business owners and others the state had tried for decades to reach through programs such as Dr. Dynasaur, VHAP and Catamount Health. Now, thanks to Obamacare, said House Appropriations Committee chair Mitzi Johnson (D-South Hero), "We have brought down the uninsured rate. We have virtually everyone in the state covered. That is a big story."

Jayne Frost, 55, of Barre, is among the formerly uninsured. The part-time deli worker is currently recovering from surgery to repair a tendon she tore a few weeks ago while bowling. If she hadn't been covered by Medicaid, she said, she couldn't have afforded the surgery and would have lost 60 percent of her arm strength. With that kind of disability, Frost predicted, her employer "probably would let me go."

Increased enrollment and utilization aren't the only factors driving up costs under the Medicaid umbrella. Steven Costantino, commissioner of the Department of Vermont Health Access, testified about the increasing cost of drugs, especially several specialty medications. A new drug for patients with cystic fibrosis that became available last summer costs $250,000 a year per person. Costantino said that medication alone was expected to increase Medicaid expenses by $3 million this year.

A one-time accounting error cost the state, too. Every six or seven years, the payment date for Medicaid vendors comes up 53 times in a fiscal year rather than 52. Forgetting to budget for that extra payment resulted in a $10 million shortfall.

Also a negative contributor: The dysfunction at Vermont Health Connect, the two-year-old health insurance marketplace, prompted the state to postpone its annual reevaluation of eligibility for everyone on Medicaid. While some lawmakers wonder aloud how many ineligible people are being covered at taxpayer expense, the state has estimated only $422,890 in savings this budget year based on the reevaluations under way.

Officials say it will take until next October to scrutinize all 186,000 Medicaid recipients. That lapse in examining eligibility has prompted Bruce Lisman, a Republican gubernatorial candidate, to call for a full-scale Medicaid audit.

The Shumlin administration used some one-time funding to make Medicaid whole. But increased enrollment requires ongoing revenue. Shumlin is expected to propose a longer-term solution in his budget address on January 21. It is unclear whether he will propose new taxes.

"The governor has told us that yet again he will starve other departments to pay for health care," said Sen. Diane Snelling (R-Chittenden) who serves on the Senate Appropriations Committee. She's not advocating for new revenues, she said. Rather, the administration needs to provide data about the outcomes for various aspects of the health coverage. She asks, "Is insurance really helping people?"

"I don't know what the solution will be," Snelling continued. "I don't want to take anything back from people, but we certainly should avoid expanding further until we have outcomes." She's referring to proposals that would grow government-financed health coverage: One would give every Vermonter preventive care; the other would extend the program known as Dr. Dynasaur to young adults.

"We have a Cadillac," Turner said. He said he is confident that a few tweaks could save the state millions of dollars. "We're not looking to slash and burn," he said. "We can be the best in the country without doing what we do now."

Consumer advocates get nervous when they hear talk of shrinking eligibility and benefits. "I'm pretty worried about any of the alternatives other than finding another revenue source," said Trinka Kerr, the state health advocate. "They would hurt people. If you reduce some benefit, that has a downstream impact on people's health."

"We are pushing for a revenue solution to the Medicaid budget gap," said Karen Lafayette, lobbyist for the Vermont Low Income Advocacy Council. "The other ways of dealing with the Medicaid gap are unacceptable." She added, "The whole idea of health care reform was to get more people covered."

Carpenter, the Montpelier Medicaid recipient, drops by the Statehouse to catch discussions on health care issues when he isn't working. He sat through several Medicaid briefings in legislative committees last week. With the hint of a limp caused by an arthritic knee, he acknowledged that he has a personal stake in the Medicaid debate.

Is he worried? With the knowing tone of one all too familiar with the emotion, he responded, "Oh, yeah."