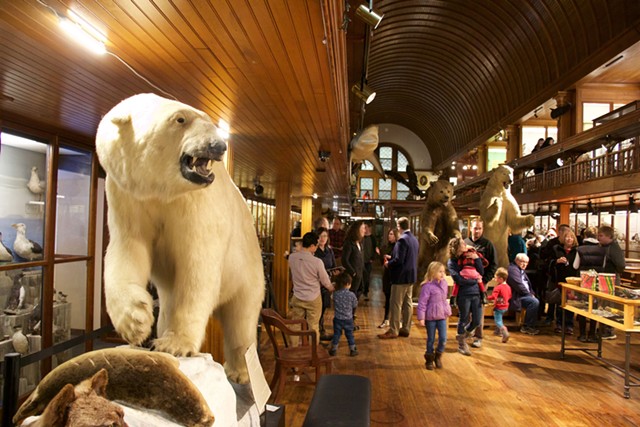 Typically, the middle of May is when the Rokeby Museum in Ferrisburgh would be opening its doors for the season, welcoming visitors to tour the historic farm and view exhibits about the Underground Railroad, the abolitionist movement and contemporary art.

Instead, museum director Catherine Brooks is thinking about whether she should spring for a new dustbuster or preserve every dollar she can for the museum's budget. Like many museums and historical societies around the state, the Rokeby staff and board are tightening the belt, unsure when museums in Vermont will be able to reopen and how much revenue they'll be able to generate when they do.

"Basically, we really trimmed down everything that we possibly could, because we anticipate having half as many visitors and half as much in earned income," Brooks explained. She said she expects the cost-cutting measures to be enough to keep the museum afloat, though "the giving piece is an unknown, too — where people are going to be, come the fall when we do our annual funding drive."

While Gov. Phil Scott's administration has allowed limited reopening of retail businesses and restaurants, at a May 15 press conference, Vermont Commerce Secretary Lindsay Kurrle said museums are not permitted to open at this time. "In the next couple of weeks we'll have some answers about that, and we'll be happy to share that when the time comes," Kurrle said.

Adam Kane, executive director of the Fairbanks Museum & Planetarium in St. Johnsbury, said that when the museum reopens, visitors will see a reduced occupancy level, mandatory mask-wearing and a handwashing station at the entrance. The ticketing system will likely move online and offer timed visits, so museum staff won't have to conduct any transactions on-site. Kane said two-thirds of the interactive exhibits in the kids' section of the museum will be removed, because they have too many touchable parts to make regular cleaning practical.

Over the past few years, Kane and his staff have been developing those exhibits to make the museum more interactive. But in the event of a pandemic, it's an advantage that most of the collection is behind glass.

"We are a Victorian cabinet-of-curiosities museum, which is, by design, 'look but don't touch,'" Kane said.

He hopes the Fairbanks will be able to open on July 1 but awaits guidance from the governor's office.

"Two of our most important earned-revenue sources are school programs and field trips, and April and May and the very beginning of June are the busiest time of year for that," Kane said. Summer is by far the museum's busiest season for nonschool groups.

"In the longer term, we're going to see some pretty big changes, I think, in the educational landscape," he continued. "Museums are a resource for schools to pull from and lean on."

Vermont arts and humanities organizations have projected a total of $26.7 million in losses through 2020. tweet this

To help offset the deleterious financial impact of forced closures on museums, historical societies, and other arts and cultural organizations, the Vermont Arts Council and Vermont Humanities have partnered to distribute $700,000 in grant funding from the National Endowment for the Arts and National Endowment for the Humanities. Nonprofit groups are eligible to receive $5,000 to $10,000 in unrestricted grant funding. While surely welcome, that grant funding is a merely drop in a bucket — or perhaps an ocean. In their applications, Vermont arts and humanities organizations have projected a total of $26.7 million in losses through 2020.

The Barre Historical Society has canceled all rentals in its Old Labor Hall, a 4,000-square-foot building and National Historic Landmark. Rentals typically bring in between $12,000 and $20,000 in a year, for everything from political rallies to bar mitzvahs and weddings, according to Marjorie Power, the historical society's webmaster and treasurer. The group uses that money for maintenance and renovations on the labor hall and an adjacent building, which has been developed into a bakery.

"If you've ever had an old building to take care of, you know it's just a black hole to throw money in," Power said.

The historical society has some grant funding from pre-pandemic times to renovate the hall's main entrance and repair cracked granite steps. The current closure is at least an opportunity to get that work done while people aren't regularly using the facility.

But the organization has had to cancel events such as Primo Maggio, a May Day celebration honoring workers and labor organizing. A virtual celebration, briefly considered, seemed too complicated. Power, who said she's "pushing 80," is also the resident "techie" of the all-volunteer group.

"We probably will be able to keep the building from falling into the parking lot," she said wryly. "But, other than that, we probably won't be having any of our normal activities."

The closure could have a serious impact on the historical society's ability to fundraise for much-needed further restoration projects for the hall, such as the unfinished upstairs.

"Who knows who will be able to afford to give money?" Power said. "It's hard, because at the moment there are people who are a lot worse off. We're very conscious of that, but we also know it will narrow our opportunities."

In Middlebury, Bill Brooks, executive director of the Henry Sheldon Museum of Vermont History, said reopening will be a challenge. The museum occupies a three-story house built in 1829, and many of the exhibit rooms are small converted bedrooms, making social distancing difficult. Brooks also expressed concern about staffing the museum.

"We have a whole cadre of retired volunteers who man the front desk and greet visitors when they come in," Brooks said. "Most of them are elderly, and they might not immediately want to jump back in."

He and three part-time staffers have been working to revamp the Sheldon's website and offer an online virtual tour, as well as publishing articles about prominent women in Middlebury history.

The Sheldon's endowment typically hovers around $1 million, but Brooks said it's fluctuated wildly during the pandemic. As at other museums, Sheldon staffers hope that grants and individual donors will carry them through the economic crisis.

"This is a wonderful community museum. It's been here since 1882, and we serve a purpose of bringing art and historic resources to our community," Brooks said. "We serve people of all ages. I'm working hard, and my staff colleagues and volunteers are, to make sure it continues."