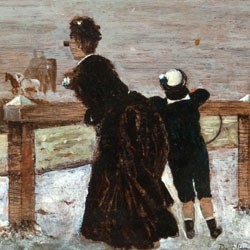 People have friends; museums have "Friends." It's capital that makes the difference.

In the case of the Friends of the Art Museum — that is, the Middlebury College Museum of Art — alumni, community members, faculty and students have pooled their donor power to purchase 76 remarkably diverse works. Their collective generosity over the past 40 years is being celebrated in a show at the museum that runs through December 12.

It wasn't until 1969 that the school began amassing works. Williams College got going on its collection in 1926, while Amherst opened a now-renowned gallery to house its hoard in 1949. Middlebury didn't build a proper campus museum until 1992.

But, as the current exhibit demonstrates, the Friends have been diligent in their efforts to put the Addison County institution on the New England art map. Museum curator Emmie Donadio, author of a catalog accompanying the "Friends Bearing Gifts" show, says that what the group has accomplished in four decades is nothing less than "a miracle."

The first piece the Friends purchased, an ancient Greek oil container decorated with dancing Dionysians, is also the oldest item in the exhibit. The 2500-year-old "Lekythos" is displayed near a 1970s sound sculpture by Henry Bertoia. The latter's 64 slim copper and brass rods produce a hypnotic hum once they've been squeezed together and released by a museum guard wearing white gloves.

The catalog's cover boy, a 17th-century Rembrandt look-alike by Dutch portrait painter Govaert Flinck, hangs alongside one of Chuck Close's pointillist self-portraits from the mid-1970s. Two scenes from the life of Buddha, sculpted in Afghanistan in the third century, are situated beside a British alabaster relief from 1520 depicting the betrayal of Christ. The show also includes Civil War photos, a 14th-century Japanese scroll, an ancient Roman statuette that's come to be known as the Middlebury Venus, and prints by 20th-century painters Willem de Kooning, Jasper Johns and Ellsworth Kelly. There's even an Andy Warhol soup can.

The variety of media, as well as the span of ages, styles and cultures, demonstrates that generations of Friends have been catholic in their tastes. They're also seldom in agreement on what to buy for Midd's museum.

It's been the Friends' practice to display three or four candidate acquisitions at an annual "purchase party," and then vote on which one to buy. Often, however, the process doesn't result in elimination. "Wealthy people would just buy the ones they liked that had been turned down," notes Bob Kingsley, a member of the Friends who's been attending purchase parties since their inception in 1970.

The official choice that year was a sexy bust of a Greek slave by Vermont sculptor Hiram Powers (1805-1873). Most recently, the Friends bought a 17th-century Dutch interior as part of a gala marking the opening of the anniversary show in September. Photos of that event displayed as part of the current show, along with shots in the catalog of convivial quaffing at past parties, suggest that the Friends have always been devoted hobnobbers, as well as art patrons.

Indeed, the yearly parties staged by Middlebury's first town-gown group quickly came to be regarded as "the social event of the season," Donadio writes in the show's catalog. In the beginning, high-quality works could be had at prices not nearly as towering as those the art market sets today.

With an annual acquisitions budget of around $20,000 supplied by membership dues, the roughly 400 Friends now focus on buying photographs, which remain comparatively affordable, says Barbara Blodgett, the group's current chair. But that modest amount also gets combined with money from other sources to finance expensive acquisitions. Five years ago, for example, Midd museum benefactors paid $190,000 for an Italian Renaissance panel. The Friends' gifts account for only a tiny portion of the 3500 works now in the college's collection.

But the 40 pieces on display testify to the connoisseurship that the group has honed in collaboration with the college's art faculty. As Donadio notes, the Friends' gifts represent "a very high percentage of what is currently on view continuously in the museum's galleries."