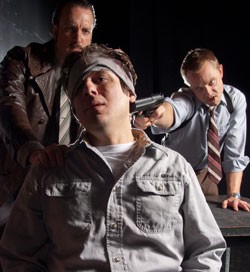 Since he burst onto the theater scene in 1996, Irish playwright Martin McDonagh has earned a reputation for darkly comic fare with a violent streak. It would be reasonable to assume, then, that a theater company that adds puppets to his terrifying 2003 play The Pillowman might be trying to lighten things up a bit. And this assumption would be dead wrong.

The puppets in the Saints & Poets production of The Pillowman, now running at the Black Box Theater at Main Street Landing, arguably deepen the darkness in McDonagh’s play. In the process, the show, directed “for mature audiences only” by Tara Lee Downs, challenges assumptions about what puppets can accomplish in the hands of a fearless cast and crew.

The Pillowman begins with its protagonist, a fiction writer named Katurian (Seth Jarvis), in the midst of an interrogation at the hands of a detective (G. Richard Ames) and a policeman (Andrew Butterfield) in an unnamed totalitarian state. It seems that some of Katurian’s more violent yarns resemble recent crimes — child murders, in particular — closely enough to have alerted the authorities. Katurian claims he’s innocent. The cops don’t buy it.

Unlike in other Saints & Poets productions, in which puppets play the major roles, in The Pillowman they appear as a kind of visual aid to the stories Katurian narrates for his interrogators. The puppets enter and exit the stage, or are projected as silhouettes, as if figments of his imagination, acting out the tales’ often-grisly events. Puppet designer Kevin Christopher’s handheld creations — somewhat crudely rendered, faceless figures — are well cast in this role. Their blank expressions bring another degree of callousness to the terror they unleash, amplifying the horrors described in Katurian’s words. Meghan Dewald’s shadow puppets add a touch of refinement to this narrative element while enhancing the nightmarish effect. Adam Cooper Wood’s sound design envelops the spectacle in subtly discomfiting melodies and tones.

What makes puppetry such a bold artistic stroke in The Pillowman — what puppets bring to the play that live actors could not — is a metaphorical dimension. The question of what drives people to do what we do permeates this performance, in which small characters are controlled by invisible agents cloaked in black against a black stage and curtain. Doomed by their tales’ violent plots and thrust at cruelty by the hands that hold them, the puppets extend an important theme about the impact of past trauma on present thoughts and behavior. The eponymous Pillowman himself — a towering creature who looks like a jack-in-the-box clown on meth — addresses the cycles of violence and despair that, in this play, are the very definition of a human life.

If trauma is the underlying problem in this play, then storytelling is the solution. Katurian’s fictions are so transcendentally twisted that they imply a horrifying set of experiences that inspired them. Critics have compared The Pillowman to the works of Kafka, Dostoevsky, Harold Pinter and the Grimm brothers. While this may be an accurate appraisal of McDonagh’s play, it underestimates the bleakness of Katurian’s vision. Think Neil LaBute meets Neil Gaiman to channel Edgar Allan Poe on a very bad day. Think innocent little kids forced to wear barbed-wire crowns or tricked to look the other way while their toes are chopped off.

Such stories are both Katurian’s sanctuary in an inhospitable world and his way of railing against it. Yet, as Jarvis plays him, he’s not an especially gloomy figure. Yes, he’s on the bookish side, but not way out of balance. Though many of his stories are gruesome, he seems proudest of his craftsmanship. When pressed on his preference for violent themes, he insists, “I’m not trying to say anything at all.”

Katurian appears, at first, as a decent citizen willing to cooperate with a police investigation. As he comes to realize he’s the chief suspect, Jarvis is called on to strike a range of emotional notes — from earnest to confused to frightened to enraged. He shoulders the material well, effecting haplessness punctuated with wry humor that gives the play some of its rare moments of levity.

As Katurian’s mentally challenged brother, Michal, Jordan Gullikson crackles with enthusiasm and childlike mirth. He and Jarvis bear the burden of some of the play’s weaker scenes, which lack the quick-witted, rapid-fire dialogue of the interrogation. Gullikson is credible in this part — and he and Jarvis enjoy good chemistry — but is conspicuously lacking in sweetness. This robs both Michal and Katurian of sympathy at points in the play when it might have been dramatically useful.

As the lead investigator, Tupolski, Ames is cool and confident in inverse proportion to Katurian’s unraveling. He’s the indifferent functionary who accepts the absurdity of a broken system rather than fight what he can’t fix. Tupolski’s vision is not as jaundiced as Katurian’s, but it’s cynical enough to lace every other line of his dialogue with biting irony. Ames’ sharp timing and understated acting yield a solid all-around performance.

As Tupolski’s coinvestigator, Ariel, Andrew Butterfield plays the openly pissed-off part of the crime-fighting team. The contrast with Ames is comical, and Butterfield is convincing as the brute about to blow a gasket. He may hold that particular note too long in spots, but he shows greater range in more nuanced emotional moments in the play.

Emotional complexities are part of what make The Pillowman a compelling play — but probably not the largest part. Katurian’s emotional journey as a bent cog in the machinery of the state is interesting, but what really commands attention is the sheer weirdness and darkness of McDonagh’s vision. The story here, and the stories within the story, fascinate and horrify with their moral emptiness. This production serves the material well, taking an innovative approach and delivering depravity with a fresh, frightening edge.

The Pillowman, written by Martin McDonagh, directed by Tara Lee Downs, produced by Kevin Christopher and Jess Wilson for the Saints & Poets Production Company. Black Box Theater at Main Street Landing, Burlington. November 10 through 12 at 7:30 p.m. and November 12 and 13 at 2 p.m. $20. flynntix.org, saintsandpoetsproductions.org