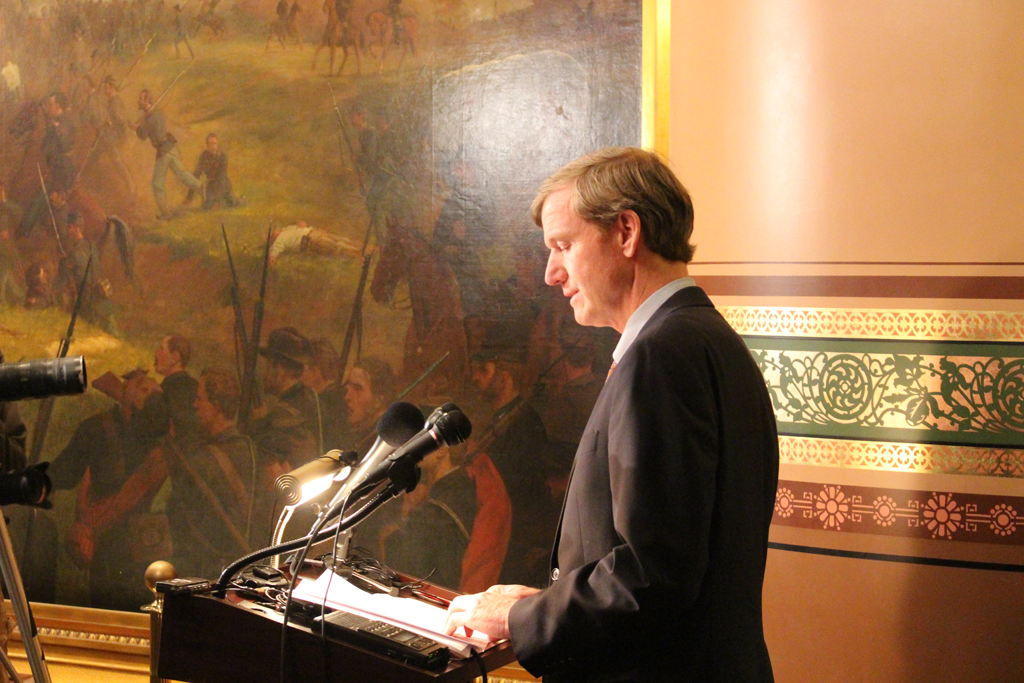 Nearly five weeks after Democratic Gov. Peter Shumlin narrowly edged him out at the polls, Republican Scott Milne declared Monday morning that the will of the voters simply doesn't matter.

Surrounded by a dozen family members and friends in the Statehouse's ornate Cedar Creek Room, the Pomfret businessman called on the legislature to name him governor next month, even though he fell 2,434 votes short of Shumlin. (Since no candidate won 50 percent, a joint assembly of the House and Senate can pick from among the top three vote getters.)

Legislators should, Milne said, "place the best interests of Vermont ahead of what is good for themselves or their political interests."

Like a third-rate despot in some third-world country, the Pomfret businessman alternately argued that the voters actually supported him and that, either way, Shumlin should be stripped of power.

"There's tens of thousands, if not hundreds of thousands, of Vermonters that do not want me to concede," he said. "And I very firmly believe, regardless of the legislature's vote next month, that it's in Vermont's best interest to keep this discussion going."

Given that just 87,075 people voted for Milne last month — and many are surely now regretting it — it's hard to imagine the former claim is true. As for the latter, the "discussion" Milne appears interested in leading sounds like a re-litigation of the election he just lost.

Milne spent much of his 35-minute appearance trotting out the same tired hits on Shumlin that formed the basis of his purported "campaign of ideas." The governor and his administration, Milne argued, suffer from "poor management," "poor planning" and "pervasive incompetence." They are "wreaking havoc all across our great state."

With seemingly no sense of irony, he said, "We have an increasingly arrogant, Montpelier-centric government that presumes it knows what is best for all Vermonters — even in the face of growing evidence that our government is out of touch and, I would argue, losing legitimacy."

Milne struggled to articulate a coherent rationale as to why, exactly, Montpelier's legitimacy would be enhanced by the installation of a second-place finisher as governor. Instead, he repeatedly returned to two rather obvious points: that many Vermonters are fed up with Shumlin and that the legislature has every constitutional right to overrule the electorate.

On both of those points, of course, he is correct.

Last month's election was a stunning, embarrassing rebuke of the incumbent — one Shumlin should not soon forget. And, yes, the legislature can constitutionally choose Shumlin, who won 46.4 percent of the vote; Milne, who won 45.1 percent; or Libertarian Dan Feliciano, who won 4.4 percent.

Milne also disputed the notion that he should concede the race to the plurality winner, as many recent second-place finishers, from Doug Racine to Brian Dubie, have.

"All this mumbo jumbo about how there's a precedent of people conceding is simply not true," Milne said. "It's [the legislature's] job to decide who's going to be best for Vermont."

Right. Because what do voters know?

One precedent the history buff managed to obscure is that in the 23 times Vermonters have failed to cast a majority of their votes for one gubernatorial candidate, the legislature has nevertheless picked the plurality winner 20 times. The last time it didn't was in 1853 — on the eve of the Crimean War, a few months before Vincent Van Gogh was born.

Perhaps Milne would feel more comfortable in such times, when our elected leaders knew better than the unwashed masses. Back then, of course, members of the U.S. Senate were chosen by state legislatures, too.

It's tempting to laugh off the entire episode, particularly because Milne has almost no chance of winning in the Democrat-dominated legislature. But by arguing that the vote tally doesn't really matter, Milne risks undermining the most important lesson of last month's nailbiter of an election: that every vote does, in fact, count.

Of course, Milne appears to take democracy as seriously as he would take governing. Asked whether he'd be prepared to take office if the legislature tapped him, despite having taken no public steps to form a transition team, Milne brushed off "all this mumbo jumbo about how tough it is to be governor and how you've gotta do all this stuff."

Asked repeatedly how far along he was in writing next year's budget, which would be due to the legislature within weeks of his taking office, Milne replied with his trademark sarcasm.

"Yeah, it's right here on the back of my speech," he said, holding up a piece of paper. "See all the numbers right here?"

So much for staying on message!

Just last week, a coalition of labor unions, liberal business associations and consumer groups gathered at the Statehouse, pledging to fight alongside one another in support of Shumlin's universal health care plan.

Speaking at a press conference this Monday at Burlington's Main Street Landing, Vermont Workers Center executive director James Haslam panned the purported plan, saying his group wanted "something worth fighting for." Which this definitely was not, he said.

According to the Digger report, Shumlin's $2 billion system would be funded through an 8 percent employer payroll tax and an income-based "public premium." Cost sharing would be modeled after Vermont Health Connect's gold plan, True reported, meaning that Vermonters would be responsible for 20 percent of covered services, while their Green Mountain Care insurance policy would pay the rest.

If True's account is, um, true, it would represent "an unprecedented and unconscionable cost-shift to patients, workers, and all low- and middle-income Vermont residents," the Workers Center said in a statement.

Kleppner's actually in a position to know whether it's really the plan. He's a member of the Governor's Business Advisory Council on Health Care Financing, a 21-member group convened by Shumlin to serve as an informal sounding board. The council's work is supposed to be confidential — and Kleppner won't discuss it — but True attributes his report to "multiple sources" familiar with the council's deliberations.

Tom Torti, who runs the Lake Champlain Regional Chamber of Commerce and also serves on the council, says he's "appalled" that some of its members "bloviated" to the press. While neither confirming nor denying the Digger report, Torti complains that it doesn't tell the whole story.

"What I read, whether it was accurate or not, I certainly believe it lacked any context," he says, blaming the leakers, not the reporter. "It lacked completeness."

That's why he's skeptical of rumors percolating around Montpelier that Shumlin's advisers deliberately leaked the plan. The administration also denies that and won't comment on the Digger story.

Proponents of the leak theory suggest Shummy was launching a trial balloon to gauge the reaction — or, perhaps, to prepare the public for its expected release late this month.

But it's hard to imagine he would be so foolish. Why dole out details of a massive tax hike without a corresponding campaign to remind Vermonters of the premium problem he's trying to solve?

There's a reason the gov's waited as long as he has — two years past the statutory deadline — to release a financing plan: Health care reform is popular in concept, but pretty damn contentious when you lay out the details. As soon as consumers and business owners know how it'll affect them, the screaming begins.

Oh, wait. It already has.

One of Milne's more coherent lines of attack this fall concerned Shumlin's frequent travel outside Vermont's borders. As Seven Days reported in September, the gov had spent nearly a quarter of his second term out of state by then — 141.5 days, to be precise — mostly on political trips and vacations.

This week, Shumlin took his final junket as chairman of the Democratic Governors Association — to Los Angeles. According to the Hollywood Reporter, Shummy and seven of his gubernatorial bros partied with Kate Hudson, Bill Maher and mega-donor Haim Saban Monday night at the Hollywood Hills home of Creative Artists Agency executive Michael Kives.

They also got down to business: On Tuesday, the DGA elected Montana Gov. Steve Bullock as Shumlin's successor for 2015; Connecticut Gov. Dannel Malloy will take the reins in 2016.

That Shumlin's chairmanship has come to an end is likely welcome news to the politically embattled governor, who cannot afford to distract himself from the coming legislative session with the fundraising and travel the position entails.

But it also presents some drawbacks: Shumlin's brief moment on the national stage is over, for now. He can no longer use the DGA as his personal piggybank as he travels around the country raising money for his own reelection. And he'll lose the two staffers he hired at the DGA: former chief of staff Bill Lofy and former deputy labor commissioner Erika Wolffing.

Lofy, a veteran political operative who spent the past two years as a senior adviser at the DGA, tells Seven Days he's taking a new job next month as chief of strategy at Green Mountain Power.

"I can't imagine a job that fits my background — from national public affairs to Peace Corps — better than this one," he says, adding that GMP is "reshaping" the future of energy.

Lofy is the latest in a long line of former government and media types to hang his hat at the Colchester utility, which provides power to 72 percent of the state.

According to GMP president and CEO Mary Powell, Lofy "brings the kind of smart, strategic thinking we need as we become Vermont's energy company of the future."

Wolffing, who spent the last year raising money for both the DGA and Shumlin's reelection campaign, has reportedly been offered a job as Senate President Pro Tem John Campbell's top staffer.

Neither Campbell nor Wolffing responded to requests for comment.

Seventeen years after he bought the Stowe Reporter, publisher Biddle Duke is stepping down and selling a majority stake in the paper and its sister publication, the Waterbury Record, to two out-of-state investors.

The sale will complete a process that formally began in October 2013, when Duke sold 49 percent of the company to Bob Miller and Norb Garrett. The New Yorker and Californian jointly own a trio of weeklies based in San Clemente, Calif.

"I was looking for not only a financial exit, but also the right thing, because I think newspapers need to continue to thrive," Duke says, adding that he has become "great friends" and "great partners" with the pair.

Duke will retain an unspecified, minority stake in the company. He'll be succeeded as publisher by sales manager Greg Popa. Managing editor Tom Kearney will continue to lead the editorial side of both papers.

"We intend to keep on doing what we've been doing," Miller says. "I think there's going to be no perceived change."

The original print version of this article was headlined "Mumbo Jumbo"