Multimedia Performance 'The Just and the Blind' Addresses Incarceration 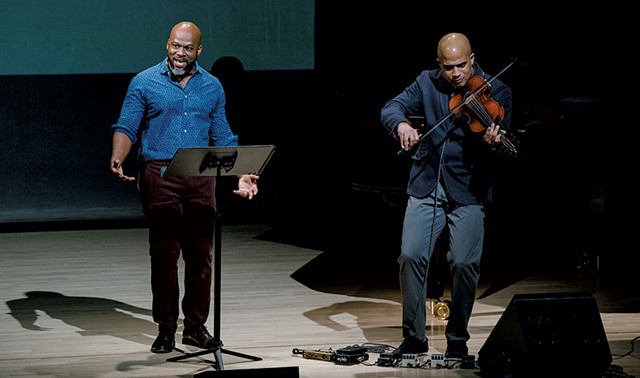 In The Just and the Blind, musician Daniel Bernard Roumain, spoken-word artist Marc Bamuthi Joseph and dancer Drew Dollaz pose profound and nuanced questions about race, freedom and justice in America. Rather than offer explicit solutions, the fusion of music, poetry, sound, film and dance that the New York Times called "a raw cry from the soul" challenges audiences to build empathy by internalizing the complicated issues for themselves.

"It's artists of color who are grappling with being citizens of color in a continuously complex moral society," Roumain explained of the performance piece in a recent phone interview with Seven Days.

Roumain, a renowned composer and violinist who often goes by DBR, is in the midst of an artist residency at the Flynn Center for the Performing Arts in Burlington. During that residency, which began in the fall, he's performed solo pieces, large ensemble works and everything in between. He's also working with children in area schools.

"It's artists of color who are grappling with being citizens of color in a continuously complex moral society." Daniel Bernard Roumain tweet this

This month, as a sort of extension of his Vermont schedule, Roumain brings The Just and the Blind just over the border to Hanover, N.H. Commissioned by Carnegie Hall in New York City, where it premiered last year, the work will be performed on Thursday, January 16, at the Hopkins Center for the Arts at Dartmouth College. Special guest vocalists from the college will join the trio. A conversation with the artists about live arts and activism will follow.

Originally conceived by Joseph, a 2017 TEDGlobal Fellow, The Just and the Blind is a series of vignettes that deal with the mass incarceration of young men of color in America and the impact it has on individuals, their families and society at large. The vignettes have several sources: Joseph's writings, conversations with his son, conversations between Roumain and his own son, and an interview between a young, imprisoned man of color and investigative journalist Lisa Armstrong.

"Each vignette tells its own story, all centered around this notion of freedom and justice," Roumain explained. He added that each story is told in a different medium or combination of mediums, from Joseph's spoken word to Roumain's music to dance interludes by Dollaz. A pioneer of a Brooklyn-based genre of street dancing called flexing, Dollaz has collaborated with the likes of Madonna and Rihanna.

In deciding how best to tell each story, the artists worked from a series of "frames," much as movie makers might use storyboards.

"Each frame represented a chapter in a book, let's say, or a poem," Roumain said. "Everything started with a bunch of words."

He described the process of figuring out which configuration of performers worked for each scene as akin to composing musical arrangements. "It was almost like deciding what the instrumentation would be."

Throughout, a film is projected on a large screen behind the performers, It, too, is multifaceted, combining portraiture, graphic video design, words and documentary-style talking heads; Roumain referred to it as "almost like [another] character."

"It comes off as very complex, but it's actually not," he said of the production, crediting director Michael John Garcés with tying the disparate pieces together.

Roumain and Joseph are longtime friends and collaborators. Most recently, they and choreographer Bill T. Jones worked together on a co-commission by Opera Philadelphia and the Apollo Theater called We Shall Not Be Moved. The New York Times hailed it as "one of the best classical music performances of 2017." Like The Just and the Blind, it addressed social and political issues faced by people of color in America.

Roumain's work has long explored the nexus of art and activism, as The Just and the Blind makes evident. Burlington audiences discovered that aspect of Roumain firsthand last October, when he and more than 100 local musicians performed a 24-hour piece in front of Burlington City Hall. The performance was a protest of the immigration policies of the Trump administration.

"I hate the fact that so much wrong is happening in our world due to privilege, due to ignorance," Roumain said. "It's terrifying times."

But Roumain thinks his residency might prove the power of art to inspire hope.

"It's really having a dramatic effect on me, my work and my collaborations," he said. "And I hope the people that I'm working with and reaching are also feeling the same kind of deep, communal resonance."

Theater The Just and the Blind Daniel Bernard Roumain Hopkins Center for the Arts, Dartmouth College