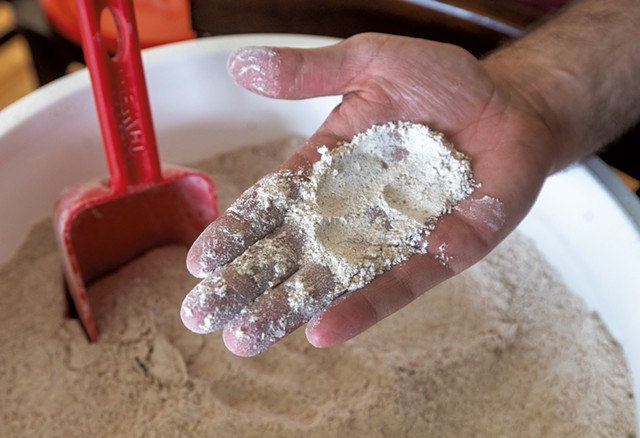 The "got milk?" slogan is emblazoned in big white letters across a red barn in Waterford, easily visible from Interstate 93. It was painted there in the late 1990s when Gingue Family Farm was producing plenty of milk. But by 2015, the family had sold its milking herd, joining hundreds of Vermont farmers who quit the commodity dairy business over the past two decades as a result of low milk prices.

Though the Gingue family no longer milks cows, they still make a living where Québec natives Rosario and Marie Jeanne Gingue put down roots in 1935. Today, two generations work together to raise replacement heifers for other dairies. They sell composted manure, as well as straw, farm-grown beef and sweet corn.

But the newest agricultural enterprise — NEK Grains, which grows wheat and barley for bakers and brewers — is the foundation on which Rosario's great-grandson Shawn and his wife, Sara, hope to build a long-term future for the farm.

This year, the Gingues will grow 50 acres of wheat and 70 acres of barley. Last year's 60-ton wheat harvest is almost sold out, Shawn said. More importantly, it is generating meaningful income, as is the barley.

"We've been able to set our price [based] on what it cost and have a decent margin: enough to raise our family, grow crops and invest in the farm," said Shawn. "With milk, it was so tight there was nothing left at the end of the day. It was just pennies — pennies." 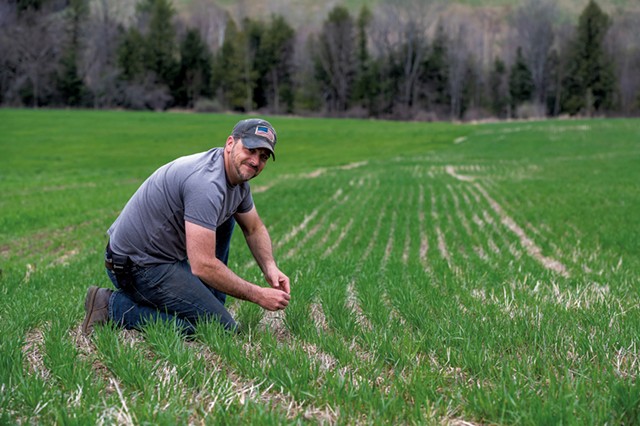 Shawn grew up doing chores on the family farm. He always thought he'd be a dairyman like his father, grandfather and great-grandfather, whom he called Grandpère. He's lived in Waterford for all of his 40 years except the seven when he and one of his brothers ran their own dairy in Fairfax.

In 2014, the brothers returned to the home farm "to invest and modernize," Shawn said. "But the milk price was just not going to support that." It was a tough decision to sell the herd, but the reprieve from nonstop chores and price pressure "gave me space to think," he said.

Seeking new opportunities, in 2018 Shawn attended the Grain Growers Conference, a joint presentation of Northern Grain Growers Association and the University of Vermont Extension's Northwest Crops and Soils Program. "I went completely open-minded, thinking, Let's see what else we can grow," he said. He was amazed to learn, he recalled, that "There's people growing barley for beer! [And] wheat for bread!"

At the conference, he met Andrew Peterson of Peterson Quality Malt, now based in Charlotte. Peterson convinced Shawn there was a healthy market for grain for local breweries and bought the Gingues' first harvests of wheat and barley in 2018 and 2019.

About a year after the conference, the Gingues met Blair Marvin and Andrew Heyn, the married baker-millers who own Elmore Mountain Bread. "They were on a mission to source all their grains from Vermont," Shawn said.

In 2020, after visiting the farm and running protein and milling tests on the grain, Marvin and Heyn bought 10 tons of the Gingues' wheat harvest. They have used it to make more than 4,000 pizzas so far for the busy Fire Tower Pizza operation at the Elmore Store.

"We are interested in participating in this blossoming sector of agriculture in Vermont to help [the Gingues] build their model and build the local grain economy," Marvin said.

Elmore Mountain Bread also plays the crucial role of milling flour for the Gingues to sell directly to other customers, including Local Donut in Woodbury, Trenchers Farmhouse in Lyndonville and Slowfire Bakery in Charlotte. The company goes above and beyond the function that any miller would perform. As Marvin put it, "the flour is milled by a baker who knows how to mill it and make it useful to bakers."

The Gingues also package flour, wheat berries and pancake mix for home cooks. On a recent Wednesday afternoon, the packaging line ran down the kitchen island of Sara and Shawn's tidy ranch house on Route 18. (The state highway runs between the original 1935 farm and the farm that Shawn's grandparents, John and Fran, bought from Rosario and Marie Jeanne for $1 in 1950.)

The couple's two older daughters helped label bags of whole-wheat flour as their mom measured out ingredients for pancake mix. A fancifully decorated cake and frosting-swirled cupcakes served as tempting evidence of the versatility of their sifted whole-wheat flour. 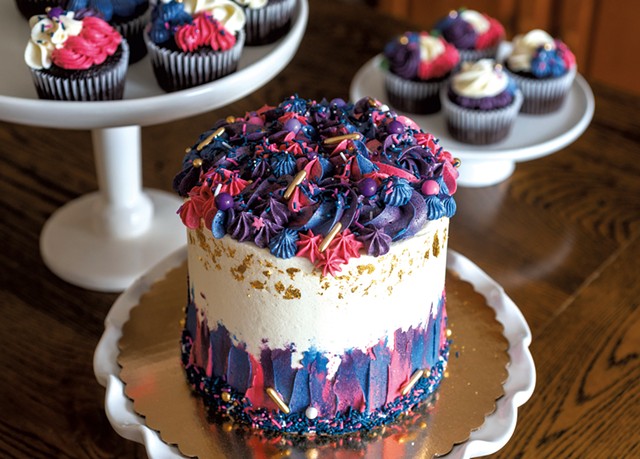 Sara, 35, started a small home-based bakery, Sugar Buckets, a year ago. She joked that the kitchen island has become "prime real estate" for packaging NEK Grains products and cake orders, not to mention feeding the family of six.

The Gingues grow a variety of hard red winter wheat called warthog. "It makes it through the winter well, it mills well, and it has great taste," Shawn said.

Their whole-wheat flour contains the whole milled wheat berry, including the bran and germ. For the sifted version, some bran and germ are removed — though not all.

"You can still see little bits of the germ," Sara noted, holding out a handful. "If someone wants a white cake, I always explain it's not going to be as white as they might be used to."

When Sara launched Sugar Buckets with a Mother's Day 2020 pop-up, she used store-bought flour. Then she started experimenting with the farm's own grain milled by Elmore Mountain Bread.

When it comes to local flour, Sara said, "A lot of people think of bread, but the sifted is great for cakes and cupcakes." The proof was in the pudding — or rather, in her fluffy chocolate cupcakes and denser but moist and buttery white layer cake, speckled with Funfetti.

"Before we met Blair and Andrew, I didn't think that flour had a taste," Sara said. She saw it as a background player in recipes or a vehicle for other flavors, "not the focal point." Now, she said, "We're hearing firsthand from customers about the flavor."

Marvin described NEK Grains' warthog wheat as "distinctively nutty," unlike other Vermont grains that tend to have a more "grassy, field-pea aroma."

Slowfire Bakery owner Scott Medellin uses the wheat flour in his baguettes — where, he said, it contributes a "sweet, nutty, spicy kind of aroma" and a less chewy, softer crumb. Beyond the Gingues' product, Medellin said he also appreciates "the way they're growing it."

Like the famous picture-book ducklings, the family waited for a break in the traffic to cross busy Route 18 and show off their fields. The kids ran ahead past a large, ramshackle red barn dating back to the early days of Gingue farming.

"This is next year's flour," Shawn said of a field striped with grassy tufts. The fall-seeded winter wheat, now sprouting, is surrounded by straw mulch left over from the barley harvest, he explained.

"The more organic matter left in the field, the more you get good, healthy soil," Sara said.

"It helps fight erosion and runoff and helps smother weeds," Shawn continued. "My grain should have all the jazz to grow right up out of that." 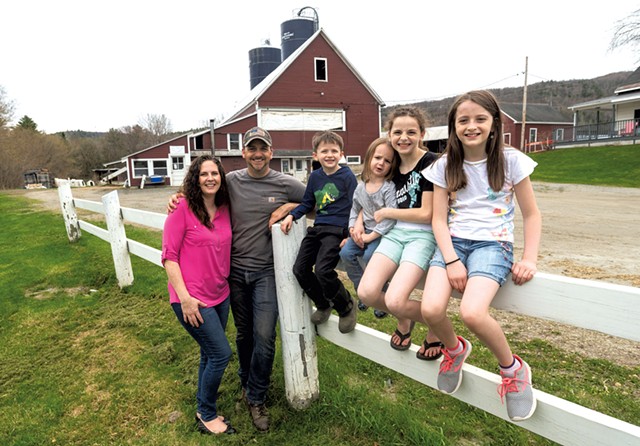 The Gingues have been working closely with an agronomist on sustainable farming practices, including no-till planting and cover cropping. While the product isn't certified organic, they use no pesticides, fungicides or herbicides. Pastured beef cows will play an important role in the crop rotation plan. "It's about building up soil health," Shawn said.

A warm spring brought the wheat up relatively early this year, the couple said. They were looking forward to the rain forecast last week and hope to avoid a repeat of last year's drought.

"As farmers, we're perpetually hopeful," Sara said. "I guess you have to be when you're dealing with Mother Nature as your biggest partner."

Shawn admitted that he was initially skeptical about the prospects of selling as much as they planted for 2020, but his wife pushed him. "I said, 'God's got a purpose for every single grain,'" Sara said with a smile.

The couple is finalizing loan paperwork that will enable them to build an expanded farmstand with a "grain center" and move their packaging operation off the kitchen island. Also in their immediate plans is getting new equipment so they don't have to rely on supportive fellow grain farmers and customers for grain storage and cleaning help.

Their goal of buying the farm from Shawn's parents is still a few years out, but it feels achievable, the couple said. They hope to branch out into custom seeding and grain processing for other farms, a way to help farmers like themselves find new markets and fill growing demand.

Shawn appreciates the support that has enabled the young business to get off the ground. "Everyone's been really receptive and helpful," he said. "There's a need for what we're doing."

When he was a commodity dairy farmer, Shawn never knew exactly where his milk went. Now that he grows grains, he said, "The best part is being connected to the customers and to the product through eating the bread and pasta and doughnuts. And," he added with a laugh, "drinking the beer."