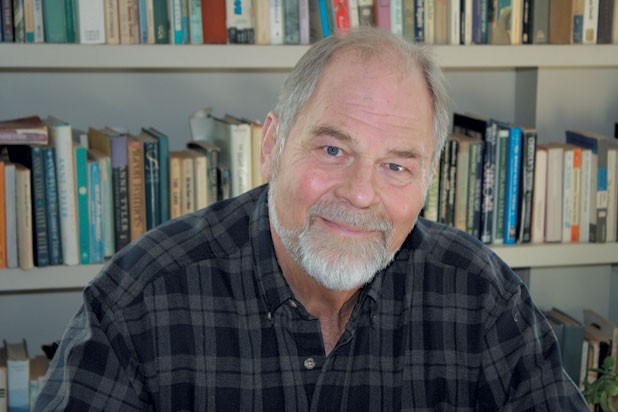 Sydney Lea’s four-year term as Vermont’s poet laureate, begun in 2011, has been packed with readings. But this Saturday’s, at the Vermont College of Fine Arts in Montpelier, will be entirely different — for him and the audience. After Lea reads four poems from his collection Ghost Pain (2005), a soprano will sing them in a song cycle written for voice and string quartet by the Philadelphia composer Joseph Hallman.

Lea, 72, and Hallman, 34, have never met in person. In fact, says the poet in a phone call from his Newbury home, Lea has yet to hear the musical work — titled “Suite in Mudtime,” the name he gave his group of four poems meditating on the bleak Vermont spring.

Hallman has sent Lea a few electronically generated segments of the piece, says the poet, but that’s quite different from a live performance. Saturday’s concert, by soprano Abigail Haynes Lennox and the Montpelier-based 802 Quartet, will be the premiere. “So I will be almost as fresh to it as the audience will be,” Lea says.

Hallman, a Cleveland Institute of Music-trained composer whose star is rising, was “struck by [Lea’s] poems” a few years ago and emailed the poet to suggest a collaboration, says the composer in a phone call. At the time, Hallman was engaged to a central Vermonter and getting to know the area, though the relationship did not work out. National Public Radio had recently named him one of the country’s top 100 composers under 40.

Lea, for his part, says he looked up Hallman’s website, listened to the samples of music posted there and decided the composer’s work “seemed not so atonal that it would turn me off,” he says wryly.

The suite of poems he and Hallman decided on — the first called “Winterkill” and the last “Winter Holding onto Winter” — features a speaker who acknowledges darkness of weather and mood without falling into despair. As one verse reads, “Now an April shower/ — cold and late — transforms the world to slate,/ and so in this moment the darkness of slate is sight.”

“The tone is so calm,” says Hallman. “We look on what we’ve gained and lost and how that colors the moment. They’re beautifully lived poems. They reflect all the good and all the bad.”

They’re also somewhat musical — not least in being titled a “suite” — and Hallman wasn’t the first to notice. Lea’s poetry often attempts interplay between his first love, improvisatory jazz, and verse. Last year he e-published an essay he wrote articulating that connection. “I’m kind of a failed musician,” Lea explains, and adds that he once dreamed of being “the white Coltrane.”

Lea deems himself “not an obviously traditional formal poet” but one who “love[s] to play around with the formal properties of the language” using half rhymes, slant rhymes and unusual meter, such as heptameter. “I’m very attentive to stresses,” he says. “I’m always counting them.”

The poet’s jazzy bent has already resulted in a musical collaboration. Last April, the Vermont Contemporary Music Ensemble performed five pieces by Vermont composers, including Thomas Read and Lydia Busler-Blais, which were inspired by 10 of Lea’s poems.

Lea calls that musical collaboration, and the one with Hallman, “a high point of my term as poet laureate. It’s been so refreshing and so different, a great shot in the arm.”

For his part, Hallman is no stranger to literature. He has set to music poems by writers from Emily Dickinson to the living poet Jessica Hornik. One of three new composers featured by the Bethesda, Md., chamber ensemble Inscape on its recent album Sprung Rhythm, Hallman contributed six mood pieces based on the horror fiction of H.P. Lovecraft. Reviewing a September 2013 performance of these works, the Washington Post applauded the “whispers, shouts and other noises” in the compositions and called Hallman “the one to watch.”

For “Suite in Mudtime,” Hallman was particularly sensitive to Lea’s use of textual quotes in his poems, from Robert Frost, the Book of Psalms and other sources. The composer “digested” these shifts in tone by having the soprano speak them. The final result “wavers between singing and monodrama,” he says.

Hallman approaches music with a wide circle of reference. The composer grew up in a poor Philadelphia neighborhood and attended a school for orphans and “functional orphans” — a term for children of single, strapped parents, of whom Hallman was one. Outside of that basic education, he became “a voracious reader and an autodidact,” in his words. He completed a year of architecture school before heading to Cleveland, and has just obtained a master’s in liberal arts at the University of Pennsylvania, where he studied the gender-specific behavior of African American boys and men at a gay youth center in Philly.

That may seem remote from his composing efforts, but Hallman’s choice to pursue a “socially impactful” higher degree is part of his wider aim to “create and engage community,” he says. He’ll take on community engagement for real when he returns to Vermont this summer as composer-in-residence of the fledgling Pikes Falls Chamber Music Festival in Jamaica. Invited by his Cleveland Institute colleague, festival founder and flutist Susanna Loewy, Hallman will share a living space with the musicians and get to know the tiny town’s residents.

Meanwhile, he says he hopes “Suite in Mudtime” will similarly “create that community,” in this case by making “connections between the audiences of those two groups — music and poetry.”