Mtn Seasons Invents a Vermont-Style Bagel, With a CSA 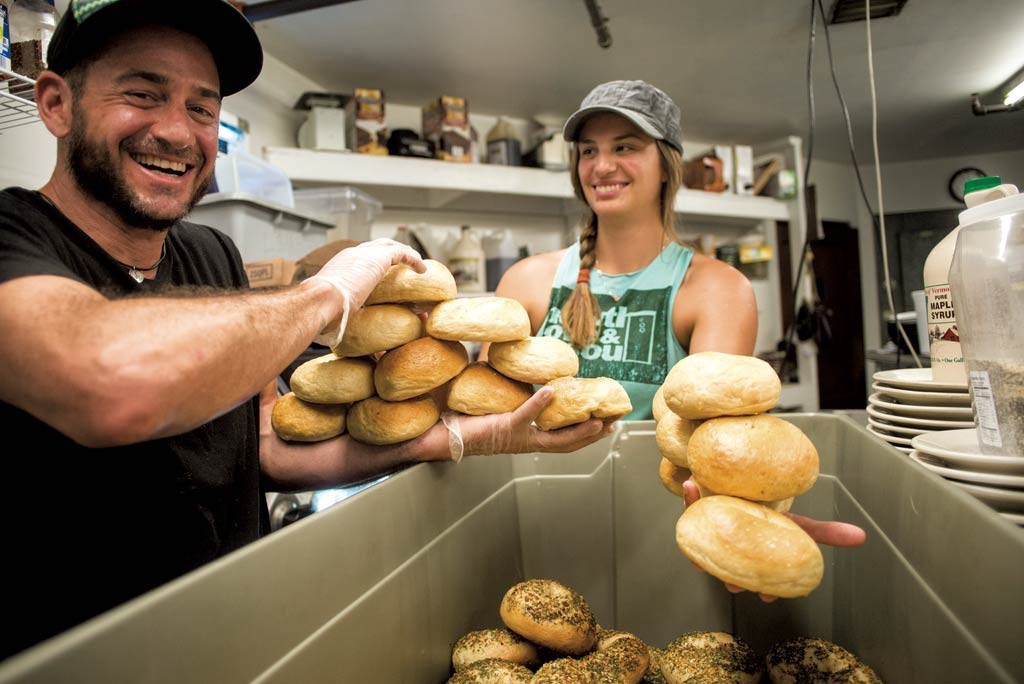 It's 7 a.m., and the kitchen at Brewster River Pub & Brewery in Jeffersonville is buzzing. It's been active since 3 a.m. — and not because someone had an early-morning craving for the restaurant's teriyaki duck wings or house-brewed, smoked-cherry porter. A quick look around the kitchen clarifies matters: More than 400 bagels line practically every surface.

Since winter, Brewster River Pub & Brewery has looked this way at least five mornings a week. It's serving as the temporary kitchen for Mtn Seasons, a new bakery that applies the community-supported agriculture (CSA) model to bagels — a first in Vermont. Friends Jeff Silver, 45, and Diane Abruzzini, 27, who started Mtn Seasons earlier this year, plan to open their own bagelry across the street come ski season.

The two live in twin apartments atop the former deli space they're now renovating — just one of many strokes of serendipity that catalyzed Mtn Seasons' quick rise. Though Silver and Abruzzini first met on the slopes of Smugglers' Notch Resort, they continued to connect when she sold him produce in their respective day jobs — she as a farmer, he as a chef.

But let's make one thing clear: They're not a couple. Even if "we fight like we're in a relationship," says Silver.

Just last summer, the neighbors decided to launch a food business together. "I was kind of done working for other people," Silver says. "I felt like I had enough experience and knowledge to do it for myself."

That past experience included working as a cook and a construction manager in his native Rye, N.Y., region. When Silver moved to Vermont in 2002, he started from the bottom again as a dishwasher at the Kitchen Table Bistro in Richmond, where he eventually worked his way up to running the grill station. The wiry, tattooed chef honed his baking skills in recent years at Jeffersonville's Mix Café & Bakery, where he added uncommon flavor profiles to muffins and scones. Many of those flavors, such as a popular combination of crystallized ginger and Vermont Cranberry Company berries, have now found a new home inside Silver's bagels. 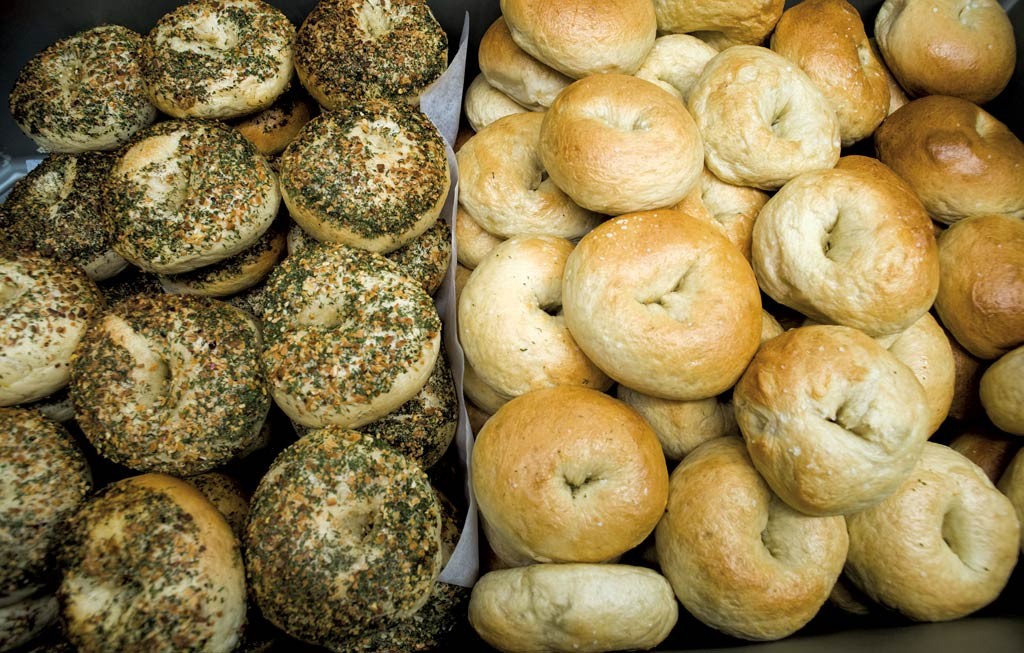 At this time last year, tall, slender Abruzzini was working on a small farm, supplying area restaurants and markets. The Maplewood, N.J., native came to farming as an anthropology major at Skidmore College. A field study on local agriculture turned into a summer job, which slowly morphed into a career. After graduating, Abruzzini moved to Vermont to work at the Intervale Community Farm. Later, she settled in the Smuggs area to teach snowboarding and started her own Beet Box Farm there. "I never looked back until it was eight years later and I was making no money still," she says.

Hoping to remedy that problem, Abruzzini teamed up with Silver. The goal: to use her farm connections and his culinary skills to showcase Lamoille County bounty in value-added wares.

The friends purchased a small, wood-fired oven last summer and began experimenting. Forays with pizza were successful, but Silver and Abruzzini reasoned that every farmers market already had a pizza vendor. Bagels were another matter. Raised just outside New York City, prime bagel country, both felt dissatisfied with nearby options. "It's nice to have our bagels up here, for sure. I definitely felt a bit of a lack before that," says Abruzzini. "Bagels are a way of life in [the New York] area."

They quickly became a way of life for Mtn Seasons' shareholders, too. Early in the season, Silver and Abruzzini decided to capitalize their business using the CSA model and sold shares to 20 friends. Within a week, that figure doubled.

No longer able to bake all they needed in their home ovens, Silver and Abruzzini struck a deal with Brewster River owners Billy and Heather Mossinghoff. In exchange for use of the space, the bakers leave the kitchen spick and span and make flatbread dough for the restaurant. It's lucky they have the kitchen, because Mtn Seasons' popularity quickly took off. What began as a workload of 300 bagels a week now exceeds 1,500.

Silver and Abruzzini offer their CSA shares in the form of punch cards: A 10-punch card sells for $50 and nets the buyer 10 bags of six bagels each. Twenty punches go for $95, a 20 percent discount off the bagels' retail price. The punch system allows CSA members to pick up as many bags of bagels as they want at any farmers market. (The Farm Store in Jeffersonville and Foote Brook Organic Farm's stand in Johnson also sell Mtn Seasons' wares.)

Though both bakers hail from the Big Apple's suburbs, Mtn Seasons' bagels are not "New York bagels." Silver used the New York-style bagel recipe in Rose Levy Beranbaum's The Bread Bible as a jumping-off point, but he wasn't content to stop there. Living in Vermont, he says, he couldn't help but incorporate Montréal influences. Initially, Silver rolled the bagels long and skinny before connecting them into rounds, just as bakers do in Montréal.

Now, Silver and Abruzzini roll their dough into balls and poke holes in the center for a chubbier, chewier bagel. From there, they drop them in a pot to boil. It matters what else is in that pot: New York bagels boil in malted water, Montréal bagels in honey. Originally, Mtn Seasons used the latter. "Then we were like, 'Maple syrup!' Duh," jokes Silver.

Thus were born Vermont-style bagels. Of course, maple isn't all that gives the rounds their unique connection to the terroir. Next year, Abruzzini plans to plant an acre-and-a-half market garden for the business. For now, she's taking a hiatus from farming — her first since she fell in love with working the land in college.

But she still has plenty of fresh produce to add to her bagels, drawn from local farmers' surplus. "I was really worried I would have less access to veggies this year, but I had more than ever," Abruzzini says. Garlicky kale is the bakery's most popular flavor, but for the next few weeks, Silver and Abruzzini will give it a break to take advantage of seasonal produce that farmers need to unload. Most of the veggies have food miles low enough to brag about, hailing from Foote Brook or Three Crows or Knee Deep farms, the last two in Jeffersonville.

Last week, farmers-market customers, CSA members and shoppers were treated to a new Mtn Seasons bagel made from puréed local zucchini and (nonlocal) dried dill. The latter distributed itself through the dough like a print on a fashionable dress. Foote Brook's jalapeños were chopped fine and incorporated in another of Mtn Seasons' typically chewy, fluffy bagels, which was topped with grated Parmesan.

Using local products is key to the business' principles; Silver stresses that he and Abruzzini hope to begin drying their own herbs for toppings such as Montréal spice and everything bagels. But maintaining excellent flavor is just as important.

The pair is willing to compromise even less when it comes to how the bagels are served at farmers markets — and will be at their bagelry. Cream cheese comes from Franklin Foods in Enosburg Falls. The company's bacteria-rich, yogurt-based variety appears in Mtn Seasons' probiotic sandwich, combined with gingery homemade kimchi.

After a morning bake last week, Silver poached eggs to demonstrate a dish similar to one he'll prepare at the future restaurant. He served the farm egg atop a toasted half bagel spread with Does' Leap chèvre. Placed in a bowl carpeted with slivers of sautéed squash, the whole assemblage was showered with colorful kimchi.

The bagels themselves are vegan, but most toppings and fillings are not. Silver and Abruzzini will serve meat in sandwiches at their bagelry, but for now they limit themselves to lox from Starbird Fish.

The restaurant space below Silver and Abruzzini's apartments is currently little more than a shell, but Silver is excited to take a guest on a tour. Two large windows, already framed, will give visitors a close-up view of the mountains. But the centerpiece is a made-to-order, wood-fired bagel oven crafted by Jeremiah Church, who most recently gained notice for building the fiery setup for Burlington's Hen of the Wood.

Abruzzini notes that she recently spent a day chopping three cords of wood and stacked them behind the building, ready to burn when they're dry. Until then, there's lots of work to do. Even Brewster River's Budweiser deliveryman asks excitedly how the bakery is coming along. Jeffersonville appears ready for some Vermont-style bagel love.

"It's like getting the newspaper on Sunday morning. Or Saturday morning. Or any morning," Silver says of starting the day with a bagel. By winter, Mtn Seasons' new HQ should be rounding out the ritual of mornings on the mountain.

The original print version of this article was headlined "Holy Mountain"