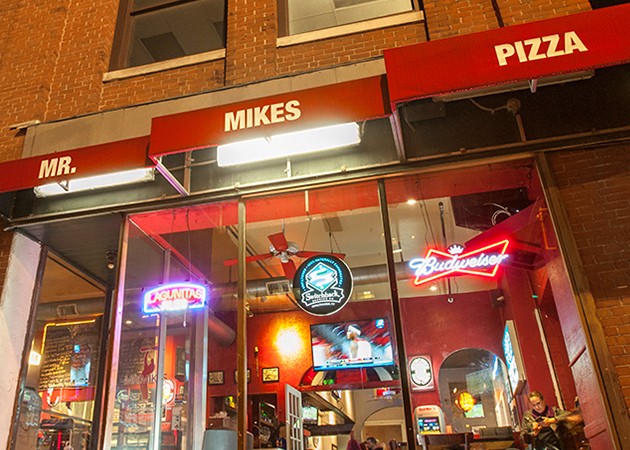 For years, Mr. Mikes Pizza has been the go-to spot for late-night sustenance in downtown Burlington. The kitchen stays open daily until 1 a.m. or later. And, until then, familiar faces serve crispy thin-crust slices topped with everything from pepperoni to Buffalo chicken.

Earlier this spring, Mr. Mikes co-owners Boudee Luangrath and Aaron Chiaravelotti knocked out a hole in the pizzeria's west wall, joining their space with the next-door one that most recently housed Catalyst Design.

Now, on the other side of a sliding door, another venue awaits. Inside 202 Main, Edison bulbs shed warm light on a lengthy, poured-concrete bar. Brick walls, reclaimed barn boards and lacquered wood tables lend country-chic charm to the long, narrow space. Called SideBar, the new establishment is oriented toward a small stage in the back, which seems to invite local talent for intimate live performances.

"We wanted to create a cool after-work spot," Chiaravelotti told Seven Days last week, standing in the bar prior to a Thursday-night soft opening. "We want it to be comfortable for people who may not want to be at a college dive."

From the bar, 20 draft lines flow with Vermont and regional craft beers and ciders, along with four wines. Barkeep Courtney Pryce is developing a cocktail program featuring a handful of signature sippers and six martinis, many made with local spirits and served in high-end glassware.

The food menu is still a work in progress, but Luangrath (who owned the pint-size Halflounge Speakeasy on Church Street until recently) says visitors can expect snacks such as pizzas, salads and wings. Look for a wide range of musical offerings, too, he adds: "It could be cool and intimate. Or, if we want to move out some tables, people could really get down in here."

Shane Murley and the Apothecarians will provide the tunes when SideBar holds its grand-opening party on Friday, May 6.