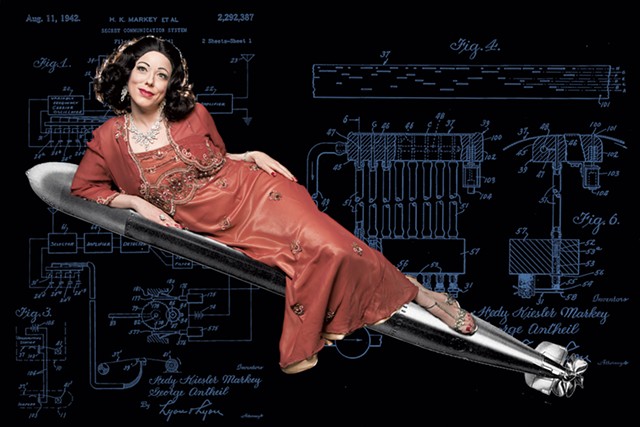 Hedy Lamarr, a 1950s starlet during the Golden Age of Hollywood, is perhaps best remembered for her striking looks. Her legacy as a scientist is less known — and yet her work in that field lives on beyond the popularity of her films. Have you used a smartphone or Wi-Fi today? If so, you've used technology that Lamarr pioneered.

New York City-based actor and playwright Heather Massie wanted to raise awareness about the actor's scientific contributions and so created the one-woman show HEDY! The Life & Inventions of Hedy Lamarr.

The inspiration for HEDY! first came from Massie's own life. As she told Seven Days, "I wanted to be an astronaut and was actually studying astrophysics in college."

Instead, Massie turned to an acting career. But, still wanting to meld her two passions, she endeavored to write a play about a female scientist. When someone suggested her subject be Hedy Lamarr, Massie said, "The pieces seemed to fall into place."

Monica Callan, cofounder and artistic director of the Grange Hall Cultural Center in Waterbury Center, is a longtime friend of Massie's. The show was written in 2016 when Massie was the center's inaugural artist in residence. "She called and needed to get away from all the distractions in New York and just write," Callan explained. This weekend, HEDY! will close out the second year of the Grange's One and Only series, a collection of solo performances.

Lamarr's life story is fascinating, to say the least. Born in Austria in 1914, she worked as an actor in Germany until 1932, when her success brought her to Hollywood. There, she landed roles opposite Clark Gable, Jimmy Stewart and other big names of the day. Audiences were enamored with Lamarr's appearance, often to the detriment of respecting her intellect. As actor George Sanders put it, "When she spoke, one did not listen, one just watched her mouth moving and marveled at the exquisite shapes made by her lips."

Lamarr grew to detest the superficial qualities that made her famous. "My face has been my misfortune ... I must always live with it. I curse it," she wrote in her 1966 autobiography.

Massie was intrigued by a woman who "would rather be at home with her research text and her drafting table than at Hollywood parties," she said. "I have a mission to let people know of the work that she's done and to establish her as a role model for young women in science and tech, because there are precious few role models in these areas."

Massie herself plays Lamarr in the show, replete with character makeup and a glamorous wardrobe. She also plays dozens of other characters, embodying the many people who came in and out of the actor's life.

The play is told from Lamarr's hindsight perspective, looking back on her life. "The idea is that the audience summons her," Massie explained, "so she speaks directly to them. She's so excited that they call her back to learn more about her inventions, instead of to gape at her beauty."

Lamarr, along with composer-inventor George Antheil, developed what they called a "secret communications system" to help fight the Nazis in World War II. It was meant to manipulate radio frequencies between transmission and reception, which prevented classified information from being intercepted by the enemy. The two received a patent in 1941, but the Navy tabled it.

Decades later, Lamarr and Antheil's spread-spectrum technology was used as the basis for fax machines, cellphones and other wireless technology.

"It wasn't until 1997 that [Lamarr] was recognized, and even then it was neglected," said Massie. "Now there are a few documentaries; PBS is producing a special on her. I want to help her name be synonymous with intelligence instead of beauty."

Massie aims to continue this project, culminating in a trilogy of works about women in science. She said she hopes to apply for another grant at Grange Hall to support developing her second play — possibly about astronaut Sally Ride.

"I just had a dream two nights ago about being on a space shuttle!" exclaimed Massie. "I guess if I can't be an astronaut in real life, being one onstage is the next best thing."

The original print version of this article was headlined "Beauty and Brains: A One-Woman Show About Hedy Lamarr"