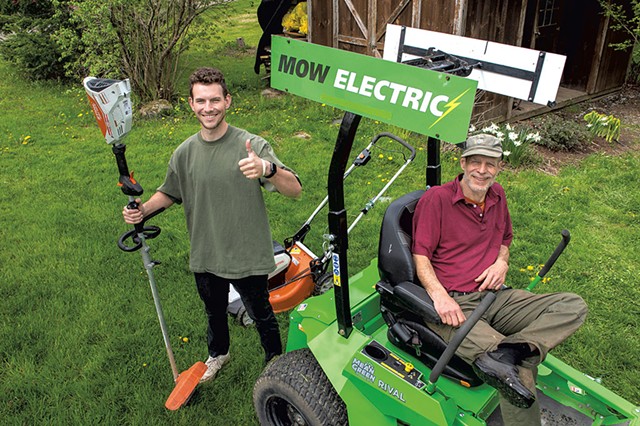 Steven Wisbaum wasn't always obsessed with electric lawn mowers. Since 1996, he's been the founding owner of Charlotte-based Champlain Valley Compost, which provides compost products to home gardeners, farmers and landscape contractors. But around 2009, spurred by concerns about the climate crisis and needing to replace his cohousing community's shared lawn mower, Wisbaum sought to reduce his fossil fuel use. He experimented with using biodiesel in company equipment and in the mower, but it caused mechanical problems. So he went looking for electric alternatives.

By 2017, Wisbaum was the Vermont sales rep for Mean Green Mowers, an Ohio-based electric mower manufacturer. Aiming to convince people who were skeptical that these more expensive mowers could perform as well as gas ones, he became an electric lawn care evangelist, giving demonstrations, attending fairs and working with electric utilities to establish incentive programs.

"I just became an advocate, not so much selling mowers but selling the idea," Wisbaum said. "It became, I guess, an obsession. I became laser-focused on making this happen."

When Mean Green sold in 2020, ending Wisbaum's work as a rep, he was determined to continue the momentum. In April of this year, Wisbaum launched Mow Electric!, a campaign to help Vermonters switch to electric lawn care equipment with the aim of reducing carbon dioxide emissions and improving quality of life.

The Mow Electric! website has the skinny on financial incentives for purchasing electric equipment, ranging from $25 for a small leaf blower to $3,500 for a commercial ride-on lawn mower. It also has interactive calculators that compare electric and gas-powered mowers in terms of long-term savings and CO2 reductions.

The cheapest electric riding mower reviewed on Wisbaum's site costs approximately $500 more than a low-end gas option. But, the calculator reveals, someone using an electric riding mower in two-hour stretches once a week for 23 weeks per year would save $106 in fuel costs and avoid emitting 880 pounds of CO2.

The site also offers user testimonials and reviews, comparisons of different equipment models, and a directory of lawn care businesses that use electric equipment. Wisbaum hopes to foster a neighbor-to-neighbor demo network of people who want to try out someone else's mower before buying their own.

"When you get on an electric mower, it's actually much more enjoyable." Steven Wisbaum tweet this

Emissions reduction isn't the only incentive for going electric. Wisbaum said electric mowers require less maintenance and fewer repairs. They're also much quieter, and though the buzz of gas mowers might be synonymous with summer Saturdays, he doesn't miss it.

"When you get on an electric mower, it's actually much more enjoyable," Wisbaum said.

He may have been a few years ahead of the trend, but public interest is catching up. In April, Burlington banned the use of all gas-powered leaf blowers to reduce noise and pollution; the ordinance takes effect for city employees on August 1, for large businesses on September 6 and for smaller ones on January 1, 2022. Town energy committees around the state have organized demonstrations to encourage the use of electric tools.

Why all the concern? Gas engines in lawn mowers, trimmers and leaf blowers are particularly polluting and noxious due to lax emissions controls. In 2019, according to the U.S. Department of Transportation, Vermonters burned 5.5 million gallons of gasoline in lawn and garden care, and Americans overall burned nearly 3 billion gallons.

But the American appetite for turf persists, to the tune of some 40 million acres of grass. The U.S. Bureau of Labor Statistics predicts that the groundskeeping industry will add more than 130,000 jobs by 2029, well above the average rate of growth of other industries.

Wisbaum estimates that the switch to an electric mower at his cohousing community has reduced its annual greenhouse gas emissions from lawn care by 97 percent. Because he believes that financial incentives will help other Vermonters follow suit, he has pushed state electric utilities to offer them. His advocacy has helped encourage all 17 of Vermont's electric utilities to offer rebates on electric lawn care equipment.

"It felt like the most tangible contribution that I ever made to addressing climate change," Wisbaum said of his campaign. "I was very gratified by that."

According to Darren Springer, general manager of the Burlington Electric Department, 263 residential customers have taken advantage of Burlington's electric lawn equipment incentive since 2019, along with a handful of commercial customers. Offering incentives that reduce customer fossil fuel consumption is one way for utilities to meet the Vermont Renewable Energy Standard, which was established in 2015 and requires that utilities invest in renewable energy. Burlington aims to become a Net Zero Energy city by 2030.

Springer was an early adopter of electric mowing. His first model, purchased around 2008, ran on a long extension cord. Others at the time ran on rechargeable batteries. The technology has improved since then, and new models have more power and longer battery life.

Springer described the lawn care rebates as one of Burlington Electric's most popular incentive programs, a good entry point for people who might not be ready to invest in an electric car.

"It's a great gateway opportunity for folks who may be interested in trying electric technologies," Springer said.

Generally, commercial lawn care companies have been a tough sell on electric equipment. "There is a culture around internal combustion engines, no question," Wisbaum said. "Look at the popularity of NASCAR."

More than that, he said, groundskeepers take pride in their work and need to be convinced that an electric mower can perform and stay powered for a full day. Several lawn care companies have made the switch, including ones in the Burlington area, Addison County, Windsor County and the Upper Valley.

For Wisbaum, the Mow Electric! campaign is a labor of love. He funds it himself and hired his college-age son, Gabe, to make the website.

Next, Wisbaum plans to distribute signs with information about the utility rebates to stores that sell lawn equipment. Many buyers, he believes, don't even know those rebates exist. The more people take advantage of the incentives, the more data they'll generate on the quantity of electric mowers purchased and emissions averted.

Electric mowers probably remain "a fraction" of the total mowers sold, Wisbaum said. But he's optimistic about the future of this electric revolution.

"My goal is to help facilitate making gas-powered lawn equipment the exception rather than the rule within five years," he said. "And it's completely doable."

Correction, May 13, 2021: A previous version of this story misidentified the name of Steven Wisbaum's compost business.