Moving to the Write

Why does Vermont have more scribes than any other state? 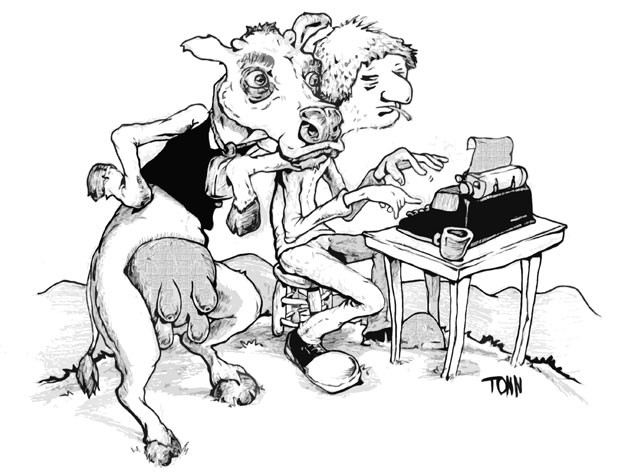 Two drunks were scuffling in the middle of a street in Orleans when Howard Frank Mosher and his wife, Phillis, arrived there in 1964 to interview for teaching jobs. Mosher gingerly interrupted the fist fight to ask for directions to the local high school. The men said the route was tricky, Mosher recalls, so they stumbled into the couple's car to guide the visitors to their destination.

"That car smelled like a Budweiser brewery for a week afterward," Mosher says, but the brawlers did help the out-of-staters get where they were going. After thanking the tipsy pair, Mosher noticed in his rearview mirror that they had resumed their dust-up.

"Welcome to the Northeast Kingdom," Mosher remembers his wife saying.

Such anecdotes are rich material for fiction - certainly for Mosher, who says odd incidents and quirky figures characteristic of Vermont helped inspire his nine novels set in the Kingdom. Could the eccentricities of Green Mountain life explain the findings of a recent survey by the National Endowment for the Arts, which indicate that Vermont has the highest proportion of writers in the United States?

Nearly 700 Vermonters identified themselves as poets, playwrights, novelists, biographers or other kinds of non-technical writers in census data analyzed by the NEA. That means 11.3 in 10,000 Vermont residents list their primary occupation as "writer," compared with a 10.8 ratio for New York, the state that reports the second thickest concentration. The figure is a significant increase over 1990, when 472 Vermonters called themselves "writers." (This is the first time the NEA has analyzed the census figures in terms of the state-by-state distribution of creative professions, says spokesman Sunil Iyengar.) Vermont also ranks high in the NEA's per-capita breakdown for artists in general.

Founded as an independent republic, Vermont has always been relatively tolerant of outsized individualism, points out Yvonne Daley, the author of Vermont Writers: A State of Mind, a book of interviews with 21 writers, including a few bestsellers, who have made the state their home. Vermont's libertarian streak doesn't just allow colorful characters to proliferate; it makes writers themselves feel welcome. Stand-outs include Julia Alvarez, an immigrant from the Dominican Republic living in Middlebury; and Jamaica Kincaid, born in Antigua and residing in Bennington.

"It's possible to do and be what you want here," observes Pat Goudey O'Brien, president of the League of Vermont Writers. With 200 members, the league offers otherwise solitary word-workers a community. The presence of many writers amid a small general population does enable "as much social engagement as you want," says poet Leland Kinsey. A seventh-generation Vermonter of Scottish stock, Kinsey quickly adds, "or as little engagement as you want."

Some successful Vermont writers live and mingle in Burlington or other population centers, but a sizeable number choose the solitude of the deep countryside - albeit with regular forays into the wider world. For example, David Budbill, author of the echt Vermont play Judevine, settled on a remote northern hillside in 1969 after fleeing New York City, which, even then, had proved unaffordable for a struggling young wordsmith.

"You're going to be poor as a writer anyway," Budbill comments, "so you might as well be poor in a place you really like."

He built his own house, grew his own vegetables, cut his own firewood and cultivated his creativity with prompts from locals who lived well outside the American mainstream. Budbill also developed a close relationship with nature that became central to his poetry. He now composes in a style inspired by traditional Chinese verse, which, he notes, usually includes people in the natural settings it evokes. "The environment here is critically important to me," Budbill says, citing similarities between the Green Mountains and China's Jade Mountains. In both, he remarks, "human beings live in a kind of balance with nature."

The absence of urban distractions and the proximity of plants and animals are also essential to the work of Galway Kinnell, whom Daley describes as "probably America's best poet." With his nearest neighbors about a mile away, Kinnell says he sometimes feels "like I'm the only person on Earth."

In Sheffield, Kinnell can readily engage in "the interchange between outer phenomena, such as a frog, and the emotional world inside" that, he says, constitutes the basis for poetry. "Metaphor is concocted by the connection of something outside and something inside," Kinnell explains. Referring to that froggy muse, he says, "I can sit all morning and write about it. You can't do that in most places."

At the same time, "if I spent all my life in Vermont, it would be too narrow a life," Kinnell adds. "And the same would be true if I lived only in New York City," where Kinnell resides for part of the year.

Budbill also regularly travels to New York, where he sometimes recites his poems to jazz accompaniment. Those trips enable him to stay in touch with black and Latino friends. "I wish Vermont weren't so white," he says, when asked if there are qualities of the state that might discourage writers from moving here.

Though it lacks the ethnic and cultural diversity of the metropolis, Vermont does have the unusual advantage of affording both rural refuge and easy access to three great cities: New York, Boston and Montréal. That serves as a powerful attraction to writers, suggests Alex Aldrich, director of the Vermont Arts Council. "Technology makes Vermont even more amenable," he adds. UPS trucks have long negotiated their way - along dirt roads - to service Vermont writers, but now agents and editors are only an email away.

Unlike actors or musicians, Aldrich notes, writers don't need physical venues as outlets for their work. Because the state has comparatively few concert halls and theaters - not to mention audience members to fill them - "it's really difficult to make a living in Vermont as a performing artist," Aldrich says.

What the state does have in relative abundance are colleges. And those are vital institutions for writers, both as training grounds and sources of employment.

Premier among them is Middlebury College with its Bread Loaf summer writers' workshop. Daley notes that several authors adopted Vermont as their home after attending Bread Loaf sessions or graduating from other schools with strong creative writing programs, such as Goddard and Bennington colleges.

And at some point, the concentration of writers reaches critical mass, and the ranks become self-perpetuating, says O'Brien, herself a transplant. Her organization serves as a welcoming network for writers who want their work critiqued from a variety of perspectives, she adds. This July 19, the League of Vermont Writers will bring representatives from several New York literary agencies to the Champlain College campus, where authors who fork over a sizeable fee - $100 for members, $125 for newcomers - will get a chance to pitch their ideas to the pros.

While Vermont's "profound sense of place" helps draw writers to the state, once here many find it compelling subject matter. The setting of a story "shouldn't be just scenery but a reason for what happens in a book," suggests Nancy Means Wright, Cornwall-based author of 14 books. "I get all my plots out of Vermont."

Four vividly different seasons contribute to the state's strong self-definition, Wright adds, noting that mud season plays a leading role in one of her mysteries. Wheelock novelist Don Bredes also spotlighted it in his acclaimed mystery The Fifth Season.

Not all writers who live in Vermont use it as a setting - Sarah Strohmeyer, author of the popular Bubbles mysteries, says an "established writer" actually discouraged her from situating a novel in Vermont. "The bottom line is the population issue. Books that are set in Vermont just don't resonate with readers nationwide," she notes, adding that "Archer Mayor could have been a humongous James Patterson-like success" if he hadn't set his novels here.

"Chris Bohjalian might have a different view," she says of the bestselling Lincoln novelist.

No one is more familiar with the risks of writing regional fiction than Mosher. He recently went on an extended book tour to promote On Kingdom Mountain, a novel steeped in the scents, sights and sounds of the Northeast Kingdom. "It was tough to drum up interest in that book," Mosher says.

Indeed, authentic regionalism may be a vanishing genre in American fiction, Mosher adds. "Places with distinctive characteristics are disappearing. Vermont itself, even the Kingdom, is becoming homogenized."

As the state's stock of unique attributes slowly wanes, will the number of self-proclaimed writers wane with it? Only time - and perhaps another NEA survey 10 years hence - will tell.