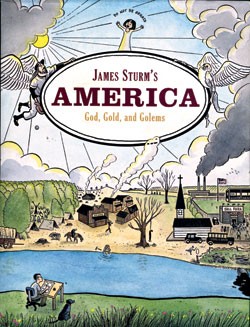 I'd bet anything that James Sturm is a picker of scabs. The part-time Vermont resident and director of White River Junction's Center for Cartoon Studies specializes in graphic novels chronicling historical wounds, from scrapes to gashes. Like humorist and National Public Radio commentator Sarah Vowell, Sturm is interested in the personal stories that combine to make up a big historical fact. But Sturm's fictional tales, in their particular tragic absurdity, give us more than social history — they give us art.

Sturm's America: God, Gold, and Golems aims to be a history of the United States in three chapters, each of which was originally published on its own. Through these three stories, the author's America emerges as a place of racial violence, religious fervor, exploitation and cruelty — but also generosity, humanity and humor. In other words, he paints an immediately recognizable portrait of our national character.

The first story, "The Revival,‚" opens in a dark, leafless wood in Kentucky at the turn of the 19th century. An exhausted couple trudges toward a revival camp meeting. They have walked, sleepless, for days in order to hear the preacher Elijah Young. They carry with them nothing but their faith — and the body of their daughter, dead from a snakebite. Since they have heard that "the stricken heal and the fallen rise‚" when Young preaches, they expect a miracle. But what they find at the Cane Ridge camp meeting is a grotesque millenarian spectacle: Zealous preachers threaten end times, while their listeners fall into fits and speak in tongues. After Young fails to return the girl to life, her mother holds the body aloft and, in four excruciating panels, implores her God to do the job.

To do justice to scenes like this, Sturm employs a powerful visual technique. He sustains moments of high emotion through a series of frames that differ from one another only in small increments, as if we were observing a scene lit by a strobe light, or looking at a flipbook one page at a time.

The second story, "Hundreds of Feet Below Daylight,‚" documents desperation and madness in a mining town in 1880s Idaho. In the opening section, two white business partners, Jem and Ned, lead a massacre of the town's Chinese residents and claim holders. Sturm renders this violence with unflinching intensity. After Jem dies in a mining accident, Ned is left with the burden of operating a barren mine — and managing impatient workers. These pressures, added to the grief of losing his beloved Jem, drive Ned to binge drinking, violent outbursts and worse. Sturm's talent for economical evocation of atmosphere lets him conjure the abandoned-carnival eeriness of the town in every frame. His rendering of imagination and dreams is creepily effective — as befits a story about the delusions of the gold rush.

But the story is about more than the ineluctable return of violence to a town consecrated by bloodshed. A second story line, in which a dying man in the care of Jem's widow turns out to possess a sack full of money, entwines with the main plot. This subplot reveals that the town's non-mining residents — women — are no less trapped than the men who blast tunnels out of the earth.

The final story, "The Golem's Mighty Swing," takes up more than half the book. Golems, soulless creatures made from mud by rabbis, have been lumbering through popular culture recently as Jewish avengers. In Sturm's take on the golem myth, a barnstorming baseball team of the 1920s called the Stars of David decide to costume their lone black player, Henry Bell, as a golem of swat. They hire a publicist to hype the game, and the golem gimmick fills the stands. But, as with the legendary Golem of Prague, their creation has unintended, violent consequences.

The graphic novelist, like a film director, tells a story through images as much as words. And reading Sturm is a little like watching Alfred Hitchcock direct a Todd Solondz script — he's got the eye-catching compositions of the auteur and the intense, painful curiosity of the squirm-inducing indie. His landscapes are particularly expressive: When the Stars of David bus wends through hilly country at night, the queasy, improbable topography calls to mind Krazy Kat and Van Gogh in equal parts. Sturm makes us feel by making us see — especially when his characters fall silent. His use of atmospheric detail, montage and body language turns speechless sequences into chamber dramas.

The power of Sturm's graphic novels comes from his use of this cinematic technique to tell complex stories. And, like most good historical fiction, from his insights into plausibly human characters. By illustrating historical moments through flawed, sympathetic figures, he gives his stories literary depth. Like many authors of historical fiction, Sturm's really writing about our present. After all, what's more American than baseball, greed and bigotry?