Moving a 19th-Century Landmark — by Ox 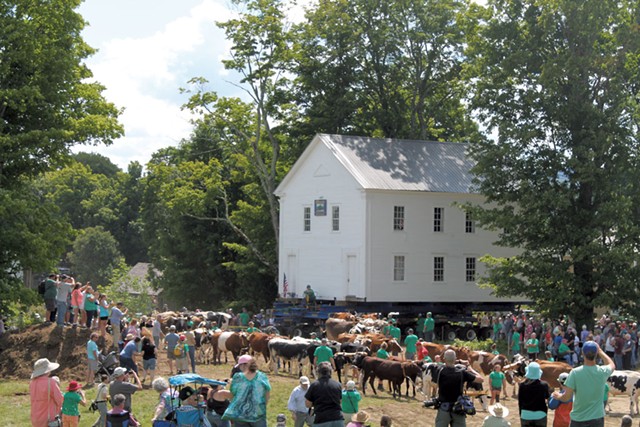 This past May, the Old Stone House Museum — a campus of historic 19th-century buildings in the Northeast Kingdom — announced an unusual wish list. The organization's spring bulletin solicited donations of laptop computers, museum tour guides, and oxen and teamsters to help "bring the Grammar School home."

This would be the second trip for the 183-year-old structure, which Alexander Twilight established as the Orleans County Grammar School in 1823, with the Old Stone House as its dormitory. After the Civil War, the building was moved closer to the Brownington town center to serve as a community schoolhouse, with the Brownington Grange occupying the second floor. Last year, the town voted to give the schoolhouse to the Orleans County Historical Society, which also owns the Old Stone House.

There were plenty of reasons for the "homecoming" itself. Richard Simpson, an Old Stone House board member, noted that his great-grandfather was a Grange member. "So it's personal," he said of the building's return.

But oxen? To move a building? Why?

"Because we are crazy enough to want to do something for the fun of doing it," wrote Peggy Day Gibson, the Old Stone House's director, via email. Plus, she added, "We're trying to bring attention to this special place."

Under sunny skies on the morning of August 8, more than 2,000 spectators brought their attention to Hinman Settler Road in Brownington. Twenty-two teams of oxen prepared to haul the 105-ton schoolhouse a third of a mile up the road, back to its original site. It was something no one in the crowd was likely to have seen — or will likely see again — in their lifetime. 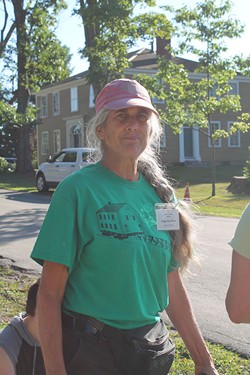 Gibson assured a passel of reporters that relocating buildings using oxen occurred with such frequency in the 1800s that newspapers neglected to report it. Two centuries later, however, TV, radio and newspaper outlets from all over the state and as far away as Boston were on hand. So was Messier House Moving & Construction, an East Montpelier family business whose motorized, wheeled carriage has helped transport hundreds of historic buildings, including the Lake Champlain Maritime Museum's schooner, the Lois McClure.

The oxen and the teamsters, many of them 4-H members, had arrived over the weekend to bed down in the "oxen hotel" — a canvas-roofed shelter complete with tie-up stalls for the animals and camper vans and tents for their humans.

Some of the oxen — such as Jim and John, a 1-year-old team belonging to 11-year-old Alyson Ballou — were disarmingly small, comparable to an overlarge Saint Bernard. Thus far, all they had pulled or dragged were big tractor tires, a sled called a "stone boat" and a cart, Ballou said.

Other oxen, such as Lee Cooper's 8-year-old team, stood as high as the cab on a dump truck. Weighing 2,700 pounds each, Cooper's formidable team, Pick and Axe, spend winters hauling logs out of the woods. "I've seen them up to their chest in snow, and they never got stuck," Lee's mother, Pat Cooper, affirmed.

The preceding day, in preparation for the big event, a West Burke oxen maestro named Steve Allen had conducted the 44 castrated male bovines as, hitched to one long chain, they worked as a united team for the first time. Allen instructed them to turn in a figure-eight formation as the teamsters strode alongside their charges, brandishing slender whips and calling out commands: "Easy!" "Gee!" "Haw!" "Step up!"

Based on this exhibition of proficiency, I purchased a $5 raffle ticket, thereby placing my bet that the teams could move the edifice straight up the road in 17 minutes and 10 seconds.

On Monday morning, as the 10 a.m. commencement time neared, the ordinarily ghostly streets of Brownington's historic neighborhood brimmed with people from all over. A couple visiting from Arizona said they'd come because "We're going to have a story no one else has." A painter from Derby wanted to study "the eunuchs" (i.e., the oxen) on behalf of her art. A historic preservation instructor from North Carolina was visiting the area and was "just delighted" to witness this event.

The collective mood felt similar to that of a wedding, with the "bride" — big, fat and wide — waiting on its motorized carriage, half a mile around the corner and down the road from the oxen hotel. 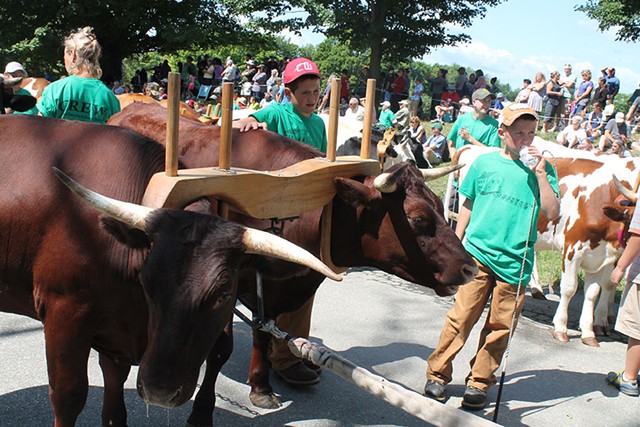 At 9:45, teamsters finished brushing their animals, administered the final squirts of insect repellent (to prevent the tossing of the big-horned heads) and helped the oxen don their yokes. Then each pair lumbered out to the maple-lined Old Stone House Road, bellowing and braying as teamsters barked commands.

By 10:30, all the oxen were hitched to the chains attached to the house and facing in the right direction. Like violinists responding to a conductor, the teamsters all raised their whips when Allen's command sounded, and then the whips swung and the oxen strained.

When one of the front teams veered off the road, Allen yelled, "Whoa!" and what had begun momentously 20 seconds earlier came to a halt. And that's how it continued: the call, "Go!" followed soon after by "Whoa!"

Seventeen minutes and 10 seconds after the official start, the enterprise had yet to travel the length of a car. Babies cried; a drone buzzed as it hovered in the sky; spectators and media photographers crept close to snap photos until green-shirted staff shooed them away.

A volunteer in a go-kart arrived with two 12-packs of water bottles and began distributing them to the teamsters. "These oxen will stand here all day if they have to," said Jeremy Michaud, the father of two young teamsters. Proving his point, the oxen stood.

Then a teamster close to the house announced that the equipment holding the structure had sprung a hydraulic fluid leak. The 4-H kids let their whips go slack and leaned on their oxen and began trading jokes: Question: What did the farmer say when his tractor got stuck in his field? Answer: "My tractor's stuck in the field."

"A lot of these oxen have never pulled on pavement before," Michaud noted as he stood by his sons and their team. "Oxen need to dig into the ground to really pull a load; they can't do that here."

Fortunately, the hydrostatic drive on the Messiers' house-moving carriage compensated for the teams' disadvantage. "If this building were to be entirely moved by animal power," Michaud said, doing some quick math, "theoretically, each ox can pull half its weight, so we'd need about 100 teams."

When the leak was fixed, Allen told all the oxen to go. And the oxen heaved, and then Allen called "Whoa," and they stopped again. "I had no idea how long it would take," admitted Linda Ramsdell of Craftsbury, who was watching from the sidelines.

Finally the oxen began to pull and kept on pulling steadily — inching forward, step by step, making an anachronistic sort of progress.

"We had to be patient," Ramsdell said — as, one hour, 55 minutes and 14.04 seconds after its departure, the oxen-led schoolhouse summited the hill and arrived at its new-old site. The oxen, having completed their task, were now detached from the chains, while the thousands gathered clapped.

"I think that's a really important part of this experience — patience," Ramsdell concluded.

Within minutes, crews were up in cranes reconnecting the electrical wires that had been removed from the road. And many of the patient spectators took their once-in-a-lifetime memories and zipped out of Brownington toward Interstate 91, accelerating into the 21st century.

The original print version of this article was headlined "Yoking Around"