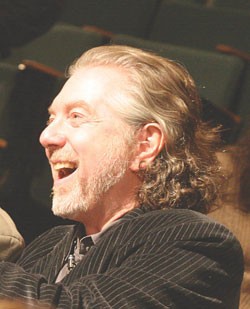 And if FairPoint were to formally ask him to appear in TV ads — a proposition the North Carolina-based company had tentatively floated a few months ago — “I’d say no,” Craven adds.

“I never intended to become a spokesman for FairPoint,” he says. Craven notes that the radio spot, for which he received no compensation, did not mention FairPoint’s controversial attempt to buy Verizon’s landlines in Vermont, Maine and New Hampshire.

“What motivated me is a populist instinct in favor of wiring rural parts of the state,” Craven adds. “I don’t see that happening now.”

Trade unions representing Verizon workers in northern New England are urging utility regulators to block the $2.7 billion sell-off. The unions say FairPoint lacks the resources to make good on Verizon’s unfulfilled promises to bring broadband Internet links to towns dependent on dial-up. Organizers of the tri-state Stop the Sale campaign further argue that FairPoint has been more hostile to unions than has Verizon.

“I’ve been hearing from union people on a regular basis about what a sell-out I am,” Craven says. In response, he points to his film company’s agreement to hire union workers for two recent productions — a decision that resulted in $100,000 in additional costs, Craven says.

He had earlier claimed ignorance about unions’ objections to the Verizon-FairPoint deal. Craven says he has since researched the issues and asked FairPoint to explain its intentions.

He cites the company’s vow to maintain all union contracts if it does win approval for the Verizon purchase. It would be “absolutely deplorable” if FairPoint breaks its word, Craven adds.

So, does he or doesn’t he favor the sale?

“Not without assurances that all the parties involved, including the unions, are comfortable with,” Craven replies.

Ultimately, he adds, “the only way to avoid the problems we’re talking about is through truly public utilities. They would wire unserved areas in accordance with public policy and would be accountable through public processes rather than basing everything on private profit.”