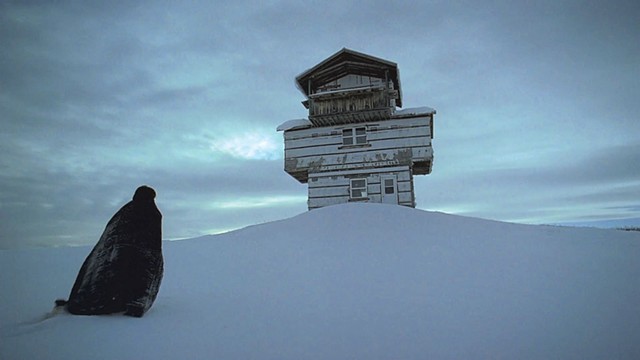 Our streaming entertainment options are overwhelming — and not always easy to sort through. Every October, I go on the hunt for new horror movies to scare the pants off me. The Lodge made me jump several times before putting me in what I can only call a trance of dread. The latest from filmmakers Severin Fiala and Veronika Franz, the Austrian duo behind 2014's Goodnight Mommy, it premiered at the 2019 Sundance Film Festival and is now available on Hulu and rentable elsewhere.

When writer Richard (Richard Armitage) asks his depressed wife, Laura (Alicia Silverstone), for a divorce, tragedy results. The couple's children (Jaeden Martell and Lia McHugh) hold their dad responsible. They despise his new girlfriend, Grace (Riley Keough), sight unseen, especially after they learn of her dark past: She is the only survivor of her father's religious suicide cult, the subject of one of their own dad's books.

Hoping to force a reconciliation, Richard arranges for the kids to spend Christmas with him and Grace at the family's remote vacation lodge. Far from a sinister home-wrecker, Grace turns out to be a shy, eager-to-please young woman who tries to befriend the kids, to little avail.

Decorated with Laura's religious paraphernalia, the lodge offers constant, unsettling reminders of Grace's own past and of the dead woman she displaced. When Richard takes off for a few days, leaving Grace alone with the kids, things go very wrong.

The Lodge is a slow-burning, meticulously shot emotional chiller in the Hereditary mold. The most bone-chilling developments come not from the supernatural but from the human psyche, and the bleak ironies may stick with you long after watching.

Most horror movies have a clear protagonist, but Franz and Fiala choose instead to shift perspective, creating all sorts of teasing ambiguities. Initially, the film focuses on Laura, showing us her desperate desire to win her estranged husband's approval. After she leaves the picture, her children, Aidan and Mia, occupy the protagonist position. Initially, we glimpse Grace only through their eyes, as a menacing silhouette seen through frosted glass.

Then, just as abruptly, the perspective switches to Grace, and the story transforms itself into a modern twist on Henry James' The Turn of the Screw. With Richard essentially a nonentity — of all the clueless dads in horror, he may be the most clueless — the drama hinges on the conflict between Grace and the kids. The characters we thought we knew begin to take on malevolent qualities.

Our sense of having inhabited all three central characters makes the story especially engaging — and dread-inducing. Keough and young McHugh give frighteningly good performances; both are capable of pivoting from tearful sensitivity to cold rage at the drop of a hat.

Meanwhile, the filmmakers keep finding new ways to weaponize the silence of a snowbound retreat, letting the tension build and build until the inevitable release. Jump scares are justly maligned, but the few in this film are masterfully handled.

Ultimately, some viewers may find The Lodge too unforgiving in its outlook on humanity. Yes, there's a dog; yes, the dog dies. But no loss goes unmourned in this movie, even if that mourning only becomes a pretext for more violence. Imagine a gaslighting drama in which it's unclear by the end who's doing the gaslighting, because everyone's trapped in a hell of their own making. That's the impressively twisted vision of this movie — which, as Kristen Lopez pointed out in the Hollywood Reporter, also has a little something to say "about the ways women negate their own feelings in order to be considered pretty and suitable."

Goodnight Mommy (2014; Hulu, Tubi, Shudder): Here as in The Lodge, Franz and Fiala play havoc with notions of feminine nurturing. Their feature debut is a quietly — then not so quietly — disturbing movie in which twin boys decide that their mother, bandaged from facial surgery, isn't their mother at all.

Hereditary (2018; Amazon Prime Video, rentable): Creepy dollhouses, filmed in a trompe l'oeil manner to emphasize the parallels between the miniature world and the real one, feature prominently in both The Lodge and Ari Aster's breakthrough psychological horror film.

The Shining (1980; Sling, Shudder, rentable): The Lodge makes such elegant use of its snowbound setting that it's impossible not to think of Stanley Kubrick's horror classic, which is always worth rewatching.

The original print version of this article was headlined "The Lodge"