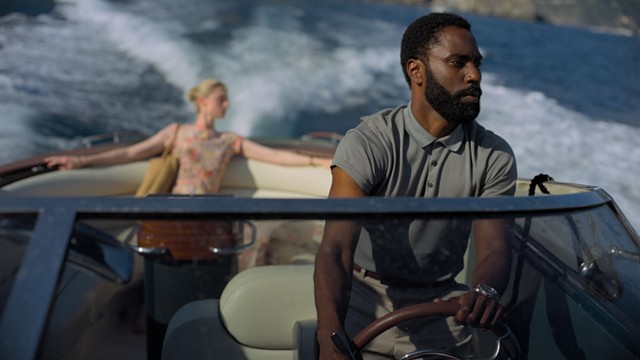 This week, I reviewed a film you can't see from your couch, because Warner Bros. and the big chains appear determined to use Tenet to entice people back into theaters. Even with reduced capacity and other precautions, I'm not ready for that, so I caught the latest mind-bending spectacular from Christopher Nolan (Inception) at the drive-in. My car's verdict? It was loud.

Our protagonist (John David Washington) is a CIA agent called the Protagonist. After he fails to foil a terrorist attack, during which bullets appear to fire backward into a gun, a secret organization called Tenet recruits him. His task is to save the world from the denizens of a future in which technology will enable things and people to invert their paths through time.

This phenomenon involves "reversing entropy" and looks like rewinding a movie on your Blu-ray player, except that some things in the frame go backward while others go forward. Everyone in the movie insists this isn't "time travel," but it works exactly like time travel.

The future foes have chosen a shady Russian oligarch (Kenneth Branagh) to engineer the destruction of the present. To get to him, the Protagonist must make an ally of his estranged wife (Elizabeth Debicki). In the movie's only character-focused scenes, Debicki vamps icily around a sumptuous yacht while Branagh issues half-audible threats in a hammy accent.

Then it's back to another heist scenario in which the Protagonist and fellow agent Robert Pattinson must steal something to accomplish something else. Because that's what Tenet is: a string of visually stunning heist-movie set pieces connected by so much ultimately pointless exposition that it's best just to shut off your brain and enjoy the spectacle of cars driving backward and buildings unexploding.

Tenet is an undeniable technical achievement. In particular, the pivotal highway-chase scene is quite something when you're sitting in an actual car, with the deafening bass of Ludwig Göransson's soundtrack making your seat shake, rattle and roll. I doubt it's the experience that Nolan — a champion of traditional theatrical viewing — wanted audiences to have, but it certainly enhanced the movie.

The problem isn't that the writer-director's intricate screenplay is "too smart" for the viewer. The problem is that he seems to have forgotten the basics of storytelling: To give us a reason to follow your twists and turns, you need stakes. Because everyone in Tenet is a high-gloss, affectless spy-movie archetype rather than a person, it's hard to care, even with the fate of the world supposedly in the balance.

As a result, watching Tenet is like watching somebody else play a video game whose maddeningly complex rules you haven't had a chance to learn. Every time the action pauses for exposition (a cut-scene, so to speak), you welcome the chance to catch up, but the sound mix foils you by rendering portions of the dialogue incomprehensible. Eventually, you may find yourself looking forward to the online debate about what it all means while getting bored of the actual movie, only to realize you've devolved into a state of meta-ness where the hive-mind commentary interests you more than the thing itself.

In conclusion, perhaps it's no wonder the future hates us.

Memento (2000; Kanopy, Tubi, rentable): This low-budget cult film about a guy with a "memory problem" is the work of the Christopher Nolan I wish we could get back — the one whose movies were twisty and "difficult" and rooted in grubby, recognizably human preoccupations.

"Dark" (2017-20; Netflix): This German series demonstrates that you can keep the audience interested in a devilishly complex time-loop narrative by giving the story ample time to unfold and mixing in atmosphere and character development. While people in Tenet may talk a good game about "grandfather paradoxes," "Dark" shows us the consequences.

Triangle (2009; Amazon Prime Video, Hoopla, Tubi, Crackle, rentable): When I did dive into the hive-mind discussion of Tenet, I found someone adamantly recommending this acclaimed yet little-known Australian horror thriller as a more successful treatment of the "reversing time" theme. I'll be checking it out.

The original print version of this article was headlined "Tenet"