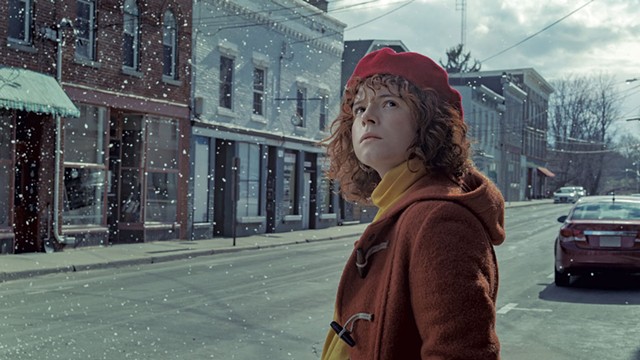 Our streaming entertainment options are overwhelming — and not always easy to sort through. This week, I review the latest from cult writer-director Charlie Kaufman, available only on Netflix.

The deal: Two young lovers drive through the snow to observe the time-honored relationship ritual of meeting the parents. His name is Jake (Jesse Plemons); hers is Lucy (Jessie Buckley), except when it isn't. Jake hints that his folks (Toni Collette and David Thewlis), who inhabit a desolate farmstead, might come off as a little weird. (Spoiler alert: They will, and then some.) Lucy reassures him things will be fine, but she seems detached. Meanwhile, the viewer is privy to her internal monologue, which rotates around an ominous phrase: "I'm thinking of ending things."

She's thinking it so loudly that sometimes Jake actually hears it — or does he? For a while, Kaufman's new movie, based on Iain Reid's novel, plays like an off-kilter psychological thriller. In this cinematic version of those puzzles captioned "What's wrong with this picture?," subtly off details infuse a mundane situation with growing tension. Then things get stranger ... and stranger.

Though the bleak snowscapes are evocatively shot by Lukasz Zal (Ida), I'm Thinking of Ending Things is essentially a chamber drama in which Plemons and Buckley have long conversations covering everything from celebrated intellectuals (with quotes!) to recent Twitter debates. Some critics have described it as a tour of Kaufman's brilliant, restless mind, which suggests it's for serious fans only.

But I can't help feeling that, by focusing on the erudition, people are missing the point that's right there in the title. It's increasingly clear as the movie progresses that Lucy's "I'm thinking of ending things" refers to more than an impending breakup, if it wasn't already clear from Buckley's dark, layered, altogether stunning performance. From the first words of her voice-over, we hear a weariness that evokes long years of depression — the sense of being caught in a futile cycle and inclined to stop hoping things will ever change.

What is that cycle? Whose cycle is it? Is it really futile? Will "things" be ended? Bit by bit, following Reid's novel, the movie approaches answers to those questions. But the answers aren't necessarily the point. This is a story about how we all have brains full of ephemera that torment us with their meaninglessness and full of imaginings that can burst into full-blown transcendence and make our lives worth living. Sometimes it's tough to find the transcendence through the torment of our second-guessing. But when the former briefly bursts forth at the climax, delivering a strange but powerful payoff, the movie takes its place among the best things that Kaufman has done.

Eternal Sunshine of the Spotless Mind (2004; Netflix, rentable): One way to "end things" in a relationship is to hire someone to erase your ex from your brain, a fantastical possibility that Kaufman explored in his screenplay for this wonderful Michel Gondry drama.

Oklahoma! (1955; rentable): Wait, what? No, really. The Rodgers and Hammerstein musical full of joyous earworms is a through line in I'm Thinking of Ending Things and a vital counterpoint to its overall darkness. At the very least, you'll want to watch or rewatch the trippy "dream ballet" on YouTube.