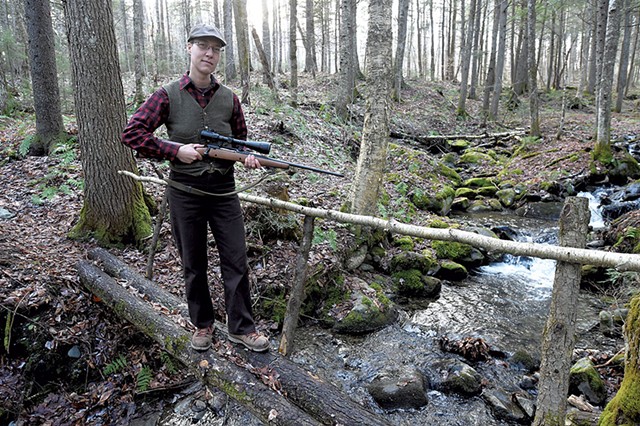 Murphy Robinson wasn't always a hunter. In fact, the Worcester-based wilderness skills educator grew up vegetarian. "Guns were not an acceptable thing in [my family's] world. I really grew up thinking hunters were evil," Robinson said. "That began to change because I became a wilderness guide and a ecological educator, and the more that I learned about predator biology."

In Robinson's view, when wolves were driven out of many parts of North America, they left a gap in the food chain. Human hunters now fill that ecological niche.

"Humans are a part of the ecosystem," said Robinson, who uses gender-neutral pronouns. The educator has lived in Vermont since 2010 but learned to hunt over seven days on a farm in North Carolina under the tutelage of a hunter they met on the Appalachian Trail. Robinson bagged their first deer that season. "I definitely had sort of a charmed entry into hunting, and it would've been so hard for me to do without a mentor," they said.

Robinson started teaching hunting workshops, originally with the help of their North Carolina mentor, because friends had been pestering them to learn. Those workshops quickly became one of the most popular offerings of Mountainsong Expeditions, Robinson's outdoor education business founded in 2013, where many of the classes are specifically geared toward women and gender nonbinary people.

"A lot of people have been through my programs now, and I've been able to create an accessible, supportive, demystifying environment for these skills that have traditionally been held in a certain class and gender category," they said.

The face of hunting is changing, according to Nicole Meier, a hunter education and outreach specialist at the Vermont Fish & Wildlife Department. In a September interview, she noted that hunting might once have conjured up an image of "an older white guy, probably with a beard, probably in a truck, probably wearing buffalo check plaid flannel ... Now, we're seeing a lot more folks who are getting into hunting who are millennial age or even younger."

Some of these new license holders may have been responding to the shortages on grocery shelves across the nation during the spring. Others may simply have lacked the time to hunt until the pandemic canceled their other obligations.

"A lot of folks are coming to it from the local food motivation," Meier said. "Folks want to know where their food is coming from, for the same reasons that you shop at a farmers market or have a garden in your backyard ... It's not that far of a leap from growing zucchini in your garden to going to hunt a turkey."

Some environmentalists promote vegetarian diets as a way to ease humanity's strain on the environment, and brands such as Impossible and Beyond Meat have cashed in by creating plant-based meat substitutes. Hunting advocates counter that argument by pointing out that harvesting meat from wild animals reduces the need for factory farming and helps control animal populations. A federal tax on the sale of firearms and ammunition also contributes to funding nongame wildlife conservation.

In Vermont, wildlife officials say the deer population poses an ongoing concern. In 2018, Seven Days reported that a combination of milder winters, fewer hunters and increased posting of land as private has allowed that population to balloon, potentially threatening other parts of the ecosystem.

A typical hunting program with Robinson involves weekends out in Worcester or even a trip to Virginia to hunt deer. This year, after canceling their in-person workshops, Robinson decided to offer an online Huntress Mentorship for women and nonbinary people. They knew it would be a very different experience from their normal workshops.

"Hunting's a very in-person, embodied activity," they said. But the virtual format allowed students to join from as far away as Alaska, and 40 percent of the mentees were people of color.

"It was really cool how this opened up access for students that can't normally participate when I teach," Robinson said.

For Willow Krake of Randolph, a big part of the appeal of Robinson's program was the opportunity to learn and build community with other queer and nonbinary people. They were also drawn to Robinson's attention to the spiritual and ethical aspects of hunting.

"Gaining a kind of consent from your prey and setting an intention around the hunt in a spiritual way was really what kind of sold me on the workshop," Krake said. While they weren't able to hunt this year, they plan to try next season.

Robinson said many students are particularly interested in learning about what happens after they shoot a deer — how to haul it out of the woods and process it. In a video shared with students, Robinson guts a deer, going over which organs are edible and other post-kill logistics.

Another student was state Rep. Mari Cordes (D-Lincoln), who hunted this season on the 10 acres she owns with her husband. She saw one deer but didn't shoot anything. "I still loved it," she said. "It was just a beautiful experience to be in the nonhuman world, even just for that short bit."

"By intention, I am not separate from the source of my sustenance." Rep. Mari Cordes tweet this

Like Robinson, Cordes is a former vegetarian who values her connection to her food and knowledge of how it was produced.

"By intention, I am not separate from the source of my sustenance, as much as possible," Cordes said. She gardens, raises animals and is an avid fisherwoman. "I wouldn't call myself a survivalist, but I like knowing that I could take care of myself and my family," she said.

On the eastern edge of Vermont, in Bradford, another wilderness-skills educator has noticed an increased interest in self-sufficiency during the pandemic. Brad Salon, who has taught primitive skills at Roots School with his wife, Sarah Corrigan, since 2007, said he hasn't seen such a boom since the aftermath of the 9/11 attacks.

"The biggest upticks have been certainly in hunting and foraging, and then basic survival skills," Salon said. He tries to help his students understand that these abilities aren't acquired in a single season but nurtured over a lifetime. "I wish it didn't have to come from a place of fear, because the skills are so fulfilling," he said.

Salon and Corrigan have amped up their online offerings this year, with a Patreon page and video classes on building a bow drill fire, tanning a hide and more. Salon emphasized that learning these skills isn't just practical — it's fun, especially for the younger crowd.

"I've never met kids who don't like starting fires, sneaking up on things, throwing sticks, getting muddy," he said.

Cheryl Frank Sullivan, a University of Vermont doctoral candidate who lives in Underhill and has been hunting with a bow for nearly 20 years, said she's happy to see increased interest, though she's not sure how many of the new hunters will stick around once the pandemic wanes. After all, it took years of trying before she harvested her first animal. But putting courses online certainly makes hunter education more accessible, she said.

"There was never a time where I was more proud to be a hunter than when the pandemic hit, and I was in a grocery store ... and there was nothing left on the shelves," Sullivan said. "I just couldn't believe the mass chaos that I was witnessing. All I could think of was, I'm so glad that I have two deer in my freezer right now."