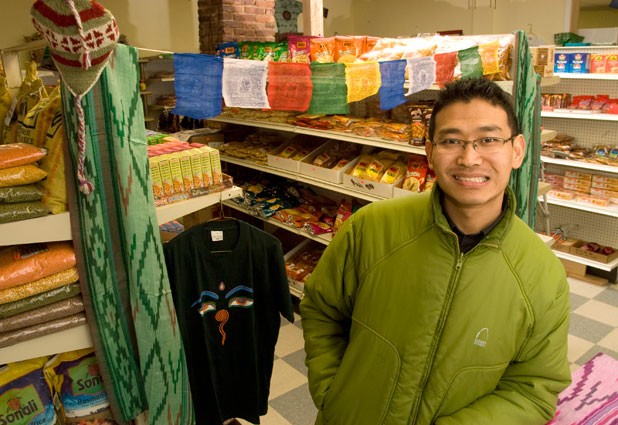 Many flatlanders will tell you the mountains lured them to Vermont. Tashi Sherpa says the same. However, the 34-year-old’s homeland is far from flat: He chose to settle in the Green Mountains because the area reminds him of his native Nepal. Tashi and his brother Ongyel are among an influx of Nepalese, Indian and Bhutanese immigrants to Vermont in recent years. That broad Himalayan community has created a demand for native comforts, one that Tashi and Ongyel are happy to oblige.

On January 2, the Sherpa brothers opened their store, Himalayan Food Market, in Burlington’s Old North End. They point out that much of the immigrant population has settled in the immediate vicinity, making their North Street location ideal for those who don’t own automobiles. The market also provides free delivery for large orders.

The Sherpas’ story begins with Ongyel, the youngest of the three siblings and the first to arrive in the U.S. The name Sherpa, he explains, “means ‘people from the east.’” The family originated in Tibet but has been in Nepal for generations. This ethnic group — one of 103 identified by the Nepalese census — shares its name with the common occupation of leading treks.

And that’s what the Sherpa family did when they lived at the foot of Mount Everest, guiding adventurers into the Himalayas and up the big peak itself. One client was Dr. Geoff Tabin, codirector of the Himalayan Cataract Project and then a Burlington opthalmologist. In 1996, teenage Ongyel asked Tabin to help him get to America. As Ongyel puts it, “In Asia, coming here even for two or three weeks, you are a new person. A guy may never have said anything to you, but you go to America and they might cross the street just to say, ‘Hello, how are you?’”

Ongyel moved in with the Tabin family and enrolled at Burlington High School. After a year, he transferred to Rice Memorial High School, where he met his now-wife, Jessica. The two attended Champlain College, from which Sherpa received an associate’s degree in travel and tourism. His professors encouraged him to continue his education, so he earned a bachelor’s in business — a degree he quickly put to use. In his final year at Champlain, Ongyel hatched the plan for an import business that eventually grew into U.S. Sherpa International, a venture that sells Nepalese handcrafts such as prayer flags, knits and paper goods to stores across Vermont. Any Nepalese goods you see at the Peace & Justice Store, Scribbles or Healthy Living probably arrived courtesy of Ongyel, now 30, who supplies more than 20 area businesses and recently started distributing his wares nationally.

Tashi, the oldest Sherpa sibling, settled in New York in 2003. (The pair’s sister still lives there.) A successful folk-pop guitarist in his native land, Tashi nonetheless felt that he could find greater security for himself and his wife, Tenzin, in America. Playing guitar in hotels and taking care of his 22-month-old son, Urken, Tashi dreamed of starting his own business as his brother had. In December 2008, the small family joined Ongyel in Vermont.

Ongyel attributes the brothers’ entrepreneurial streak to their father, back in Nepal, who also led the way into the food biz. His parents “started as porters and slowly built up to dishwasher, then cook,” says Ongyel. “And now they run their own trekking business. My dad went to school for maybe one year. He really earned his place. I talk to him on the phone and sometimes I’m amazed at his intelligence and savvy in business. He started from scratch.”

The senior Sherpas’ cooking jobs weren’t confined to the mountains. For six years, they helped a Kiwi diplomat and his family in their Nepalese home. Eventually the New Zealander took the couple aside and said, “‘You don’t have to do this kind of work all your life,’” says Ongyel. “They helped them finance a dry food business. My dad manufactured poori [bread], granola, dried vegetables, packet soups.” Now, 26 years later, Ongyel hopes to sell his father’s products in Burlington.

Many of the items in Himalayan Food Market hail from India. One company, called Mo’pleez, offers cans of gul bahar (better known as gulab jamun), fried milk dumplings in stunningly sweet rosewater syrup, and snack packs of mini lentil and raisin samosas. Ongyel admits that Himalayan cuisines overlap, but he points out some Nepalese specialties. For starters, there’s a package containing what look like long, fluffy sheets of seaweed; it’s actually the dehydrated version of a dish called gundruk, or fermented leafy vegetables. These are mustard greens, but gundruk can also be made from spinach, cauliflower or radish leaves.

Ongyel names dhedo as another Nepalese staple. “It’s kind of a dough made with millet or wheat,” he explains. “It’s almost like mashed potatoes. They eat it with sauce, a hot sauce, with their hands.” Dhal bat — which translates as “lentil rice” — is perhaps the essential food in his culture, Ongyel notes. Further differentiating his native cuisine from that of India, he adds, “Nepalese tend to use less sweetening. It tends to be more simple. [With] Indians, there are lots of yogurts, just lots of ingredients.”

As Buddhists originating in Tibet, are the Sherpas vegetarian? In a word, no. Ongyel describes his culture’s approach to meat: “If you go and kill on your own, that’s not OK,” he says. “The killing itself is not acceptable. It’s like the difference between stealing something and being given something.” Eating meat but choosing not to slaughter it oneself? Sounds like most of the Western world.

Then again, not all Buddhists eschew animal flesh. Consider the popularity of momos, the meat dumplings that Americans have come to know (and often love) over the past decade. The Sherpas’ store offers a special flour for preparing momo dough, but making the dumplings from scratch is a daunting project.

So it’s not hard to predict Ongyel’s next move for Himalayan Food Market: adding prepared food. This month, the store will begin serving homemade momos, along with pakoras (meat or vegetables fried in a chickpea meal called gram flour); channa (chickpea stew); dal bhat; and chai masala, a spicy, peppery tea. These dishes will debut at the store’s official grand opening celebration on Sunday, March 22. Tashi might just bust out his guitar, and the brothers will give out samples of tea and snacks. To lure customers, they’ll also offer 10 percent off all purchases over $10.

Ongyel says a number of his regular customers are Americans, many of whom became acquainted with Nepalese food while traveling in the Himalayas. Others are experiencing the culture and its cuisine for the first time, with the brothers’ guidance.

However, Ongyel says, the best aspect of his business is helping immigrants find a piece of home. “Not having had a store here to accommodate the growing [Nepalese-descended] Bhutanese population, we want to help that community and sell familiar products here,” he remarks. “It’s great for people to come from so far away and come in here and say, ‘Oh, wow, that reminds me of home.’”

Though Chittenden County’s Nepalese population is growing, its food hasn’t yet achieved the familiar status of, say, Vietnamese cuisine. Diners may need a guide to navigate the aisles of foreign-looking delicacies. Perhaps a Sherpa? Tashi and Ongyel have provided a primer on the top five Nepalese items to try.