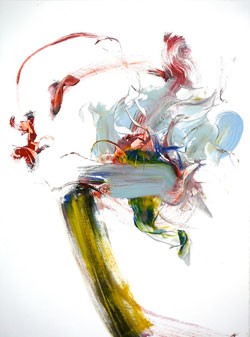 Nancy Abbott-Hourigan had her eye on Nancy Taplin’s paintings for years. Unfortunately, it was tragedy that finally brought the curator of the Amy E. Tarrant Gallery and the veteran Vermont artist together. The gallery’s current exhibition slot had been scheduled for James McGarrell, but his son’s death in the January 12 earthquake in Haiti put that plan on hold. Taplin was asked to fill in. In her artist’s statement, Taplin writes about her experience standing in the Guggenheim in New York City looking at a Kandinsky painting as the earthquake took place. She cites that famous artist’s quote: “The more frightening the world becomes … the more art becomes abstract.”

Taplin accepted the invitation, and Kandinsky’s words seem to echo through the last few paintings of the series she’d begun in August but completed just before this exhibition. In her show of 16 works, some pieces created in response to the earthquake present its frightening disorientation in coexistence with more quotidian experiences. Other pieces seem purely conceptual. Taplin’s stark, fluid abstractions could be seen as representing both human vulnerability and passion. Her visual vocabulary suits this purpose, as she drapes bold color over white backgrounds in gestural painted ribbons.

Taplin’s exhibition includes both large paintings on linen and smaller works on gessoed paper. In both, twisting tendrils of color spiral around each other, sometimes hanging in the white space like unanswered questions.

The paintings on linen are worked extravagantly. The artist employs a broad range of techniques — applying paint by brushing or wiping, then thinning it with oil, or scraping and dragging tools through it. In “Silent Shouting,” a large work on linen, the white is opaque and forceful. Midnight blue and persimmon red play across this surface in variegated ribbons that intertwine and diverge amid a symphony of supporting colors. A red, rose - like form blossoms in the upper left of the painting, while in the opposite corner an oblong shape spews multicolored streamers. The centers of these paintings are active, explosive, their dynamic gestures suspended in time. The pristine white edges seem contrastingly compressed.

Similarly, Taplin’s works on paper seem to spin in their own space and bounce off the edges as if alive. In “Haiti, Jan. 12, 2010, 4:53 PM,” intense red and orange strokes push against thick black lines. The piece feels chaotic and fractured; its strokes writhe and come apart. In an adjacent work on paper, “Canopy,” a morass of colors churns beneath a wavy black line. These seem like two views of the earthquake: one an experiential snapshot of being on the shaking ground, the other a vision of the movement of the ground itself as a great, uncontainable, devastating force.

“Without a Sound” reads as almost figurative. In it, a human figure seems to be running, its forward leg a thick yellow and green stroke. A red mark arched over the top quarter of the paper becomes an extended arm. Composed of just a few spare strokes, the figure is compact but complete. Taplin winds together the brushstrokes that make up the body, scraping paint away in places. Her technique creates a feeling of frenetic movement — in fact, of fleeing.

In “Risky Possibilities,” a glossy black stroke snakes over brushed, wiped and scraped lines of ultramarine blue and royal purple. The paint drips thinly with oil, congeals in mounds and parts in furrows as if scraped with a comb. Surface and substance interact as the gessoed paper blends with and diverges from the paint.

While the Haiti earthquake informs Taplin’s exhibit, the paintings succeed formally and conceptually apart from that concept. These are the dynamic and enticing works of a seasoned artist.