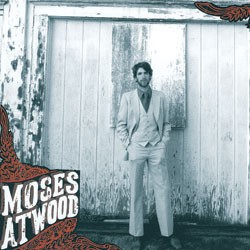 In exchange for his soul, the Devil allegedly offered Robert Johnson the ability to play the guitar as no man before him ever had. One fateful October night at a crossroads in Mississippi, Johnson became “King of the Delta Blues,” and his mortal soul the property of Satan himself. On his hauntingly gritty yet bracingly intimate eponymous debut album, wandering minstrel Moses Atwood displays the similarly ragged sound of man who may well have made his own Faustian bargain with the Prince of Darkness.

The disc begins with “Woman, Angel, Demon, Child.” Atwood unleashes formidable chops with sinister acoustic guitar lines that evoke baleful backwoods blues. But it’s the songwriter’s visceral lyricism that chills the bones and suggests an otherworldly pact. “When you need a little child / Mother, you can stroke my hair. / And when you need a reason / Woman, I’ve got the kind of flesh you can tear,” he sings in a tortured growl.

Atwood finds redemption in the arms of a former lover on the following track, “Seventh Sin.” The tune is a tender, aching ballad that examines the inherent frailties and failings of the flesh. Again, his writing is grave and vivid, but delivered with wistful sincerity. “Your heart leaps into your throat. / The poison and the antidote / is asking if you want some tea. / Your bodies don’t know that you broke up in December. / They just know they go together,” he sings over nimbly finger-picked guitar.

The record continues with Atwood similarly vacillating between themes of damnation and salvation. By album’s end, listeners will likely feel as though they’ve experienced a little of both themselves.

Atwood’s debut is as notable for what it lacks as it is for the remarkable material it contains. At no point on the record are more than two or three instruments played simultaneously and, save for a few fleeting glimpses from backing vocalist Meghan Yates, Atwood’s is the only voice. Though sparsely arranged, the album never feels thin, as the songwriter’s uniquely full-bodied guitar work fills as much space as necessary — and no more. Producer David Goodrich adds bits of piano, electric and acoustic guitars and banjo. But his work is complementary. Atwood remains the focus entirely. Would the Devil have it any other way?

Did Moses Atwood meet The Deceiver at a crossroads? Probably not. But at the very least, he sounds as though he’s a man who has confronted his own demons more than a few times in the shadowy corners of a darkened mind. May God have mercy on his soul.

Moses Atwood plays a slew of Vermont gigs this week. Check this week’s listings to find one near you.