'Moriah': A Work of Dark Fiction Set in Vermont 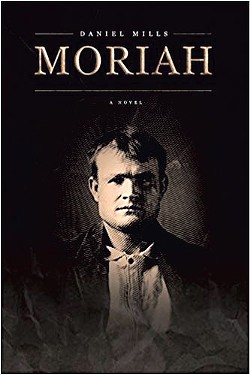 Homegrown author Daniel Mills has gained a bit of a following in the horror community over the past few years. Since 2009, the Vermont native and University of Vermont employee has been steadily publishing: His output includes a number of short stories (many collected recently in The Lord Came at Twilight), the novel Revenants: A Dream of New England and a chapbook, The Account of David Stonehouse, Exile. In all of those gothic-tinged works, Mills sets out at a deliberate pace, allowing his readers to sink into the skin of his characters and their surroundings.

The same holds true of his latest novel, Moriah. Like many of Mills' earlier works, it's set in Vermont's past, in the days of close-knit communities and small farmers etching out an existence from the state's rocky soil.

While Mills is known for his horror fiction, Moriah isn't really a horror novel, even if one or two ghosts appear in its pages. Opening in 1874, the story concerns a former minister named Silas Flood who takes a train up to the fictional town of Moriah. "This is Moriah, then," writes Mills in his evocative initial description of the town, "with its rutted streets and low brick houses, churches caked in old whitewash: Methodist, Congregational ... Signs in the window [of the general store] advertise liver pills and castor oil, faded lettering rimed in dirt. The door is shut, bolted."

Flood is a man carrying considerable baggage: He served in the Civil War as an chaplain for the Union army and now, a decade later, still contends with the memories of the horrors he witnessed. When Flood returned from the war to discover that his wife and child had died in his absence, he lost his faith in God. Now, working as a reporter for a newspaper in New York, he travels to Vermont to investigate reports of the Lynch family, who claim to be able to converse with the dead.

Moriah is a book about grief and its aftermath. When Flood arrives in the town, he discovers others like himself: people who have lost loved ones, who can't seem to move on from their pasts. He's skeptical of the Lynches' claims, checking their home for crawl spaces. As Flood questions the family and their guests, he ends up uncovering other, deeply damaging secrets that haunt the Lynches even more than the ghosts they summon.

While Moriah has supernatural overtones, the horror here is a bit subtler than in Mills' other works. Vermont has a particular history with this type of claustrophobic, dark fiction. Authors such as onetime Bennington resident Shirley Jackson recognized that people are often scarier than the monsters that come out at night — look no further than her famous story "The Lottery." Mills does something similar here: His characters are deeply suspicious and fearfully pious, which motivates them to sometimes-horrific acts that leave a lasting impression on everyone involved.

Even if the supernatural isn't quite your thing, Moriah is a splendid read, with beautiful, deliberate prose and a haunting, oppressive atmosphere that perfectly captures the dark, impoverished state of Vermont in the years after the Civil War. It's a creepy ghost story that takes some of the shine off the postcard image that outsiders may have of the Green Mountain State, while delving into the universal theme of grief.

The original print version of this article was headlined "Books Quick Lit: Summoning the Dead"