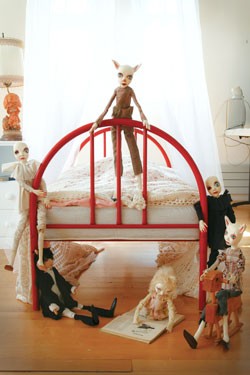 It looked like something sinister was going on last week on the fourth floor of the Firehouse Center for the Visual Arts. A child’s bed sat in the middle of the studio, but the only sign of its occupant was a mass of long blond hair emerging from underneath.

Ghostly white dolls with bald pates and ravaged, gaping mouths dangled from the ceiling above the bed. A horned girl-doll perched on the bedframe, a beaked one next to the lamp nearby. Black rag dolls with pointed, Klan-like hoods and white clay masks for faces watched eerily from miniature chairs on the floor.

“The ‘strange dolls’ have taken over the bedroom,” said their creator, Burlington artist Beth Robinson, with an easy laugh. Surprisingly warm and chatty, given her macabre aesthetic, the 34-year-old Mississipi native explained the scenario she had come up with to exhibit her creations at a closing reception that took place last Friday. Robinson had just completed a two-month residency at the Firehouse.

Since she began making her strange dolls in 2003, the artist has gained a dedicated following via the Internet. She is represented at the Strychnin Gallery in Berlin, which has branches in New York and London. Without a hint of boastfulness, she noted that all the dolls created during her residency would sell, after she moved back to her Pine Street studio and put their pictures on her website.

“I’m the most shocked by the thing myself,” Robinson declared. “But people just love them.” Many of her fans are overseas, she said, and “one woman in Pennsylvania, a collector of macabre art, has bought one of every series I’ve done.

“There’s a huge doll community out there. It’s its own subculture; it’s underground,” she averred.

Robinson was unaware of this gothic underworld when she switched from “dabbling” in painting and drawing to making dolls from polymer clay, wire and cotton batting. Her inspiration came when a friend forwarded a link to a gallery in Japan showing “very creepy” dolls as art.

While she has no formal art training — and left college after a year and a half to move to Vermont in 1995 — Robinson was specific about her influences. Her work might remind viewers of Tim Burton’s films or the recent animated movie Coraline, but Robinson considers those “kids’ stuff.” She prefers the work of more “political” artists, such as the Czech stop-motion animator Jan Svankmajer and the German surrealist Hans Bellmer, whose unsettling, disarticulated ball-joint dolls, made in the 1930s, were declared “degenerate” by the Nazis.

Does Robinson’s work have a political motivation? Her answer was cagey. “Maybe I [do]; I just don’t want to talk about it,” she ventured, laughing again. Did she have a tortured childhood? Not at all; her parents are Baptist missionaries who have always been “really supportive,” she says. Robinson noted that she never liked playing with dolls as a child — though she did cut off the hair and paint the faces of her younger sister’s doll collection.

Rather than offering a lengthy artist’s statement on her work’s underpinnings, Robinson admitted only that she’s “attracted to creepy things, to mystery.” She’s more interested in other people’s reactions to the dolls: “I make them for my own reasons, but I feel they have a second life with the public,” she said. “I don’t want to interfere with the dialogue that happens between the viewer and the piece.”