More Money for Artists! Round Two for BCA's Community Fund 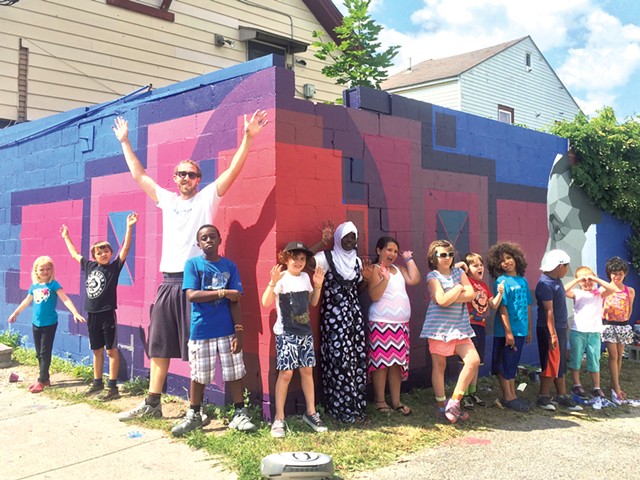 What do homelessness, the criminal justice system and Alzheimer's disease have in common? They were among the themes of 16 projects made possible by the Community Fund, a program that Burlington City Arts initiated in 2016. The idea was to grant money to local artists or small arts organizations to further the creation of works that "contribute to the public good."

BCA supports the creation of new works in a variety of other ways, such as the Barbara Smail Award and the Seven Below Arts Initiative. But this fund "is perhaps distinct from other grant opportunities," according to BCA assistant director Sara Katz, "in that it's emphasizing community involvement and benefit." The Community Fund is not intended to support "straightforward creation of art," she added. "An application that requests funds to complete an existing body of work, like paintings or a demo track, for example, will not be as competitive as an application that brings community members into the project in a compelling and interesting way."

Some of the initial projects financed by the Community Fund have been completed, and others are still taking shape — final reporting is due in July. Meantime, the second round of applications is due by February 27.

Last year, a panel of seven reviewed applications from area artists and distributed $35,000 among the finalists, generally in grants from $1,000 to $3,000. This time, the panelists will be different, but the total available funding is the same.

Artists who are considering applying and wondering if their project is apropos can take a look at some of the previously funded projects:

The highly visible mural series along North Street by artists Sloan Collins and Mary Lacy was made possible by a $1,000 grant and executed with the help of more than 40 kids in the Old North End. The duo will create one more mural this spring.

The Vermont International Film Foundation received $1,000 to support its annual festival. According to director Orly Yadin, the films shown at the fest last October "represent a hugely diverse range of social concerns, from civil rights to women's and girls' rights, LGBT, environmental concerns and more."

With her $3,000 grant, South End artist Maggie Standley provided 10 scholarships to low-income kids for her Spread Your Wings! youth-empowerment program. They were snatched up quickly, said Standley, who runs arts education programs at her Wingspan Painting Studio on Howard Street. "I started [the program] four years ago," she added, "when I saw a need to work more toward closing the opportunity gap, and to provide quality options with all kinds of kids mixing."

A group of local theater artists used a $3,000 grant to fund Intersections, a performance piece incorporating stories of individuals affected by the criminal justice system. It draws on letters from people who have been incarcerated in Vermont, as well as stories from the families of inmates.

Public Works Press used its $3,000 grant to support a steamroller-printmaking project. Attendees were provided with panels and tools to carve them in September. The resulting prints were auctioned off at an early October event, with the proceeds donated to the King Street Center.

The community radio station WBTV-LP received $1,000 to complete its new headquarters in the South End. A collaboration of Vermont Community Access Media, Regional Educational Television Network and Channel 17, the station indicates on its website that its mission is to be a "platform for free speech" and "to give voice to citizens who may be marginalized or silenced."

South End artist Corrine Yonce used her $3,000 grant to create a series of painted portraits of affordable-housing residents for the ongoing Voices of Home project of the Vermont Affordable Housing Coalition. Yonce is a resident organizer. She'll give a presentation on the project at PechaKucha Night this Thursday, January 26, 6 p.m., at Burlington City Hall Auditorium.

New City Galerie received $3,000 to support its free artist residencies. Said director Joseph Pensak, "This grant has made a huge impact on our ability to continue our residency program." The gallery has three studios on-site, which are available for artists to use for six months at a time.

Other funded projects are still to come. Watch for a talent show from the Vermont Performing Arts League at North End Studios; a project from Alison Cannon that pairs architects with people affected by homelessness to generate sketches of the latter's dream homes; a Vermont Stage play about families dealing with Alzheimer's; another play, by Joy Cohen, about Burlington's Lost Shul Mural; and more. A full list of 2016 grantees can be found on the BCA website.