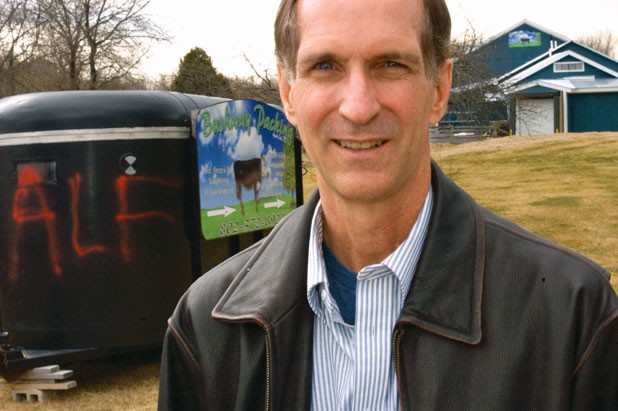 A Vermont-based U.S. Department of Agriculture inspector became an animal-rights hero in 2009 when he exposed abuses at the Bushway Packing slaughterhouse in Grand Isle. Dean Wyatt tipped off an undercover investigator from the Humane Society of the United States, who shot videos of downed calves too weak to walk being dragged, kicked and shocked with electric prods. Wyatt later succumbed to brain cancer in Tyler, Minn.

A month after Wyatt’s death, Bushway co-owner Frank Perretta was sentenced on animal-cruelty charges. Perretta got a $2000 fine and 120 hours of community service. He is banned for life from working with animals.

Earlier this month, Perretta faced new charges that he violated the terms of his probation when he allegedly made a threatening phone call to the HSUS’s undercover investigator. According to an unnamed source familiar with the case, Perretta allegedly called the investigator and said, “Your buddy’s dead. Maybe you’ll be next.”

Shortly before press time, the Grand Isle clerk’s office reported that charges against Perretta were withdrawn after he agreed to have no further contact with the confidential informant.

Meanwhile, the slaughterhouse itself, which has remained closed since 2009, has its own legal troubles. In January, the District 6 Environmental Commission, which oversees Franklin and Grand Isle counties, rejected an Act 250 permit application filed by the slaughterhouse’s new owners, Champlain Valley Meats, and property owners Ron and Colleen Bushway. The permit would cover improvements made on the property that were never officially sanctioned.

According to District 6 Coordinator Geoffrey Green, the permit was denied based on two criteria: noise and aesthetics, and the slaughterhouse’s incompatibility with the town plan. The new owners have since appealed that decision in environmental court.