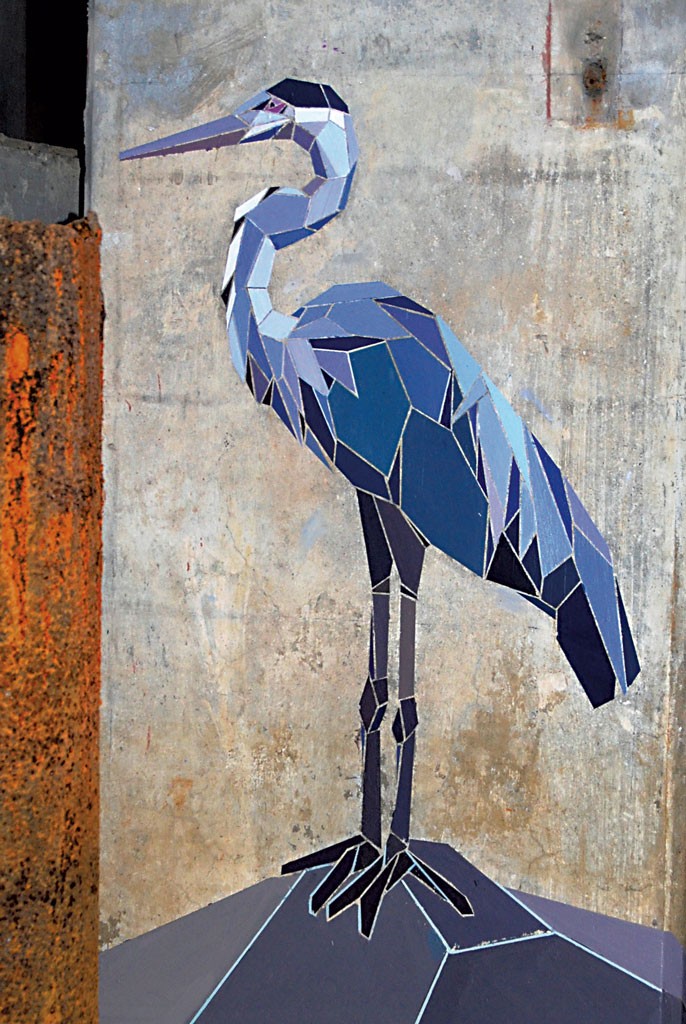 Anyone who's been to Burlington's Moran Plant in recent years — taggers, vandals, hopeful developers — has seen roosting birds and scurrying raccoons in the long-abandoned structure. But, so far, not too many visitors have witnessed the small herd of animals that appeared this fall inside the looming hulk on the waterfront's North 40.

They're the work of Mary Lacy, 24, the first artist-in-residence at the former power-generation facility. Since September 7, she's painted a dozen native creatures, along with flowers, reeds and trees, on the walls — sometimes scrubbing away graffiti in her chosen spots. Those locations are not immediately evident upon entering the building, and to see them all requires a vertiginous climb up six or more stories on open metal stairs.

Lacy was invited to the residency by the team from nonprofit New Moran, including Tad Cooke, Erick Crockenberg and Charlie Tipper. The city-approved developers aim to create a fully repurposed, energy-efficient facility that will house a market hall for local food and art, meeting spaces and recreational opportunities, among other tenants. Fundraising to accomplish this ambitious project is under way.

Not everyone has the opportunity to don a hard hat and tour the Moran, but, thanks to local videographer Julian Rodier, everyone can still see Lacy's artwork. Rodier made a short film that provides a virtual tour, which can be viewed below or at New Moran's website.

Putting art in the Moran now — even though it will eventually be destroyed — is part of the developers' effort to show the building in a new light: not a dismal, rusted wreck but a place of stark beauty and vast potential. Rodier's evocative camera work underscores that idea.

"I want to help stimulate Burlington's waterfront transformation," Lacy says in a release about her residency. "With Moran, I'm challenging people to use their imaginations. You could see a forsaken old building scarred with graffiti, chipped tiles and broken glass. I see a variety of textures and a palette of beautiful colors."

Why wildlife paintings? On a recent tour of the building, Lacy explains her theme from the bottom up. When she began her project, the first floor was completely flooded, and the artist imagined a watery world — so she painted a blue heron, a couple of frogs, a sturgeon. Climb higher and you come across a dragonfly, a deer, a bat. Higher still are an osprey and an owl. Each encounter is a lovely surprise, a reminder of the natural world within this manmade behemoth of concrete and steel, graffiti and broken glass. Dramatic lighting angling in from multiple windows enhances the painterly effect.

Seen from a distance, Lacy's flora and fauna appear realistic, but up close, a viewer realizes they are composed of myriad geometric shapes. This fractalizing disrupts the eye's perception of form. But step away and the pieces merge into congruent wholes again.

This tile-like style of painting is a recent development for Lacy. In fact, so is painting at all. The Jericho native says she enjoyed drawing and painting while attending Mount Mansfield Union High School, but she dropped it altogether when she headed to New York University. "I studied politics, not art," Lacy says. But then, she explains, "My friends moved into a giant warehouse, and I painted murals on their walls. Both were portraits — that's what I returned to when I picked up the brush."

The scale of those murals "forced me to be abstract for the first time," she says. Over the year since then, she's painted a few other murals for friends and on commission. Lacy acknowledges that she's intentionally honing a signature style, which she thinks will help advance her newly adopted career as an artist. "A lot of mural artists have a distinctive style and brand," she says, "so I thought I would develop this." After a pause, she adds, "But I don't want to be stuck in it."

At just 24, Lacy could still go in any number of directions and try any number of styles. Her work in the Moran — which took 60 hours a week for three months, she estimates — is evidence not only of an emerging talent but of her dedication to mission-driven art. "I want to use art to bring awareness to certain projects, parts of town and neighborhoods that need attention," she says. "In the future I hope to be hired for more mural projects. Particularly redevelopment projects.

"I think a lot of people don't know about the Moran," Lacy continues, "so the variety of ways you can get the word out is important. Julian's video is catchy and beautiful."

The artist says she wants to use her experience at the Moran Plant "as an opportunity to connect with people I wouldn't otherwise have met." Of the development team, Lacy says, "I'm really grateful that they let a 'nobody' do this."

More information about the project can be viewed at moranplant.org/marylacy and at marylacyart.com.