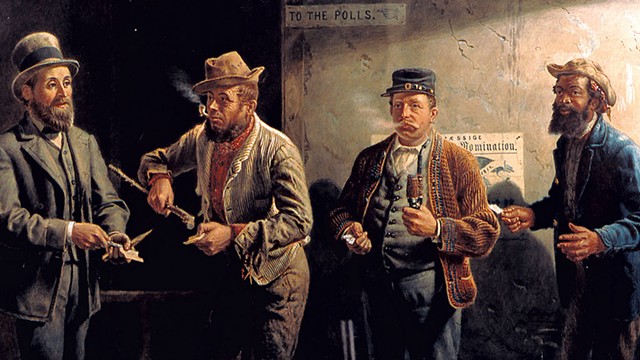 Passersby would not suspect that a refurbished 1950s Catholic grammar school in Montpelier contains masterful paintings from the 19th century as well as works from the 1930s Works Progress Administration.

In one room on the second floor of the Center for Arts and Learning, visitors can linger over the expressive faces and tiny details of an 1860s genre painting by Montpelier native Thomas Waterman Wood. In the next room, they can be wowed by a stylized 1937 composition of skyscrapers by Joseph Stella. (The hallway connecting the rooms contains the water fountain once used by U.S. Sen. Patrick Leahy, who attended elementary school there.)

This is the unusual home, and bifurcated collection, of the T.W. Wood Gallery. One of the oldest art museums in Vermont, the Wood is currently observing its 125th anniversary. Since the pandemic made a slew of planned events impossible, the Wood instead has been offering something unprecedented: tours. Visitors can preregister for a self-guided tour on Thursdays or score a spot on a fully guided tour one Saturday per month.

Volunteer curator Phillip Robertson is the gallery's genial and knowledgeable tour guide. A landscape painter who teaches art and art history at Northern Vermont University-Johnson and the Community College of Vermont, Robertson spent a year and a half completing a conservation assessment of the Wood collection before serving as the nonprofit's executive director from 1997 to 2002. He returned in 2014 to inventory the collection and join the board, where he now serves as secretary.

"I do know [the collection] very well," Robertson acknowledged by phone. "It allows me to curate sort of off the cuff."

Robertson launched the tour that Seven Days attended with a summary of the gallery's history. Wood (1823-1903), a nationally known painter in his day, donated the collection's core — 42 of his own works — to the City of Montpelier in 1895. The collection has since grown to encompass at least 1,200 works from the 19th century, including Wood's "In the Jelly Jar," purchased at auction in late October and currently on display.

Shortly after World War II, the federal government designated the Wood Gallery a repository for 90 artworks created under the WPA, which subsidized the nation's struggling artists during the New Deal era. Subsequent donations swelled the gallery's WPA collection to about 250 works, including paintings by Yasuo Kuniyoshi and Jacob Lawrence.

The growing collection led a somewhat itinerant life. First housed with the YMCA in a building on State Street, donated by Wood's friend John Burgess in 1896, it moved into the upper gallery of the Kellogg-Hubbard Library in 1953, and then to Vermont College (now Vermont College of Fine Arts) in 1985. It reached its current home, the repurposed grammar school on Barre Street, in 2012.

The board purchased the building with the Monteverdi School of Music and River Rock School under the umbrella nonprofit Center for Arts and Learning. (River Rock has since closed.)

The three gallery rooms can display only a fraction of the collection, which Robertson rotates every six months. Working with Vermont state curator David Schutz, he also sends 60 to 90 works to hang in the Statehouse every year, typically in out-of-the-way committee rooms and legislators' offices. (Recently, Lt. Gov. Molly Gray requested some WPA works by women.)

During a phone call, Schutz said the 19th-century works, particularly landscapes, were especially welcome after the Statehouse restoration, a project he led beginning in the early 1980s. "Our [state] collection is heavily dominated by portraits of governors, and that can get to be a little boring," Schutz said with a laugh.

The Wood prominently displays the painter's 1894 self-portrait, created late in his life. Largely self-taught, Wood married Minerva Robinson of Waterbury and made his early living painting portraits. He trained himself to paint using the method then in vogue: by setting up easels in European museums and copying the "old masters."

One of the artists Wood copied most often was Rembrandt, according to Linda Paradee, a former artist who trained at Rhode Island School of Design and has been a board member since the mid-1980s.

"When Thomas Wood was working as a painter," Paradee said in a phone call, "Europe was the center of art, not America. In the museums in this country, all of the art came from Europe."

The gallery holds many copies Wood made of famous European paintings; indeed, one reason for his bequest to the city was his desire to share European art with residents, who had little chance of traveling to see it.

In 1898, Wood got permission to copy Rembrandt's 1633 painting "The Shipbuilder and His Wife" at Buckingham Palace. He completed his copy (now on view at the Wood) in a day and a half, according to Robertson, who found this astonishing fact documented in one of the 100-plus cash books Wood left behind.

"He worked very quickly," Robertson said, but with evident skill. Wood eventually became president of the National Academy of Design and the American Watercolor Society.

Wood was a product of his time in other ways. He also did genre paintings — realistic but imagined portrayals of everyday scenes, which sold well. Often these included Black figures, whom he depicted in less stereotypical ways than did his contemporaries, according to Robertson.

In "Southern Cornfield," which Wood painted in 1861 while living in Tennessee, a line of hardworking Black field hands pauses to observe a young Black man who kneels to offer them a drinking gourd. (This painting is also on display at the Wood.) No white overseer is in evidence — the painting is an erasure of slavery, of sorts — but Robertson called the workers' individualized portraits "sympathetic portrayals."

Schutz added that the gourd is "a nod toward freedom — a symbol from the Negro spiritual '[Follow] the Drinking Gourd' that promised freedom on the other side."

"Cornfield" is one of a dozen Wood paintings depicting Black subjects that Robertson chose for a Statehouse exhibition planned as part of the anniversary celebrations. Delayed by the pandemic, that show is expected to go forward this fall.

Robertson also curated an anniversary exhibit of 37 WPA-era prints that runs through March 24 at the Vermont History Museum.

Unusually for an art institution in the pandemic, the Wood is gaining financial stability, according to its new executive director, Margaret Coleman. When she came on board two years ago, the gallery was installing an elevator. Accessibility allowed her to apply for grants from the National Endowment for the Arts for the first time in the gallery's history.

Coleman also secured a three-year Vermont Arts Council Art Partnership Grant that will support exhibitions and programs such as afterschool art classes, which have continued during the pandemic. Among the exhibits are contemporary local art shows in the hallway, currently being painted white. The next hope: to hire a paid curator.

"A lot of people don't know what we have here — the extent of the collection and the historic value," she said. "For a small town like Montpelier to have this rich collection is pretty unusual."

Correction, March 17, 2021: An earlier version of this story misstated the year in which T.W. Wood painted "Southern Cornfield." It was painted in 1861.