Montpelier Puts Words Where the Windows Are 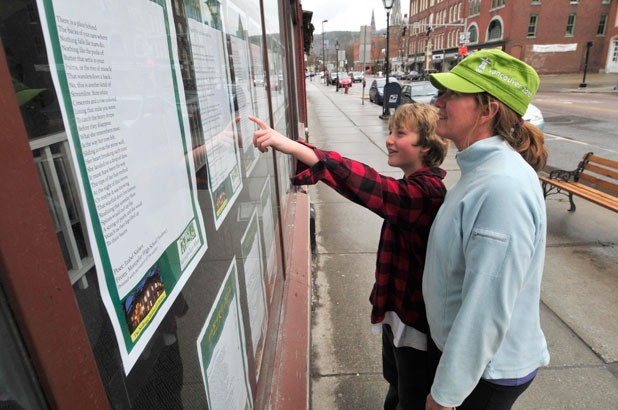 The windows in downtown Montpelier have seen a lot of action so far this year. On Valentine’s Day, they were plastered with the red hearts that mysteriously appear every year throughout the city. Now those windows feature poetry by Vermont writers. After all, April is National Poetry Month.

Thanks to the Kellogg-Hubbard Library and downtown community association Montpelier Alive, pedestrians in the capital have been stopping on sidewalks to read the works of professional and amateur poets alike. The name of the monthlong initiative: “Poetry Alive!”

Rachel Senechal, program and development director at the library, orchestrated a similar project in Waterbury a few years ago and wanted to try it out in Montpelier, she says. In just over a month, she and a small committee managed to elicit about 200 poems from 90 writers representing 30 Vermont cities and towns. The poems are now hanging in 40 diverse venues, including the library, banks, restaurants, stores and a pharmacy.

In most windows, the display isn’t fancy — individual poems are printed on legal-size paper and stuck to the glass with tape. But some places have gotten more creative. The Hunger Mountain Co-op has painted haikus on its café windows; the Knitting Studio created a knitted display inspired by poet Mary Elder Jacobsen of North Calais; Birchgrove Baking arranged a cake display in response to the work of Woodbury writer Phyllis Larrabee; and Artisans Hand Craft Gallery is displaying its featured poems in an outdoor garden.

Phayvanh Luekhamhan, who helped organize the event, says the goal was to draw poetry out of community members and not simply to highlight the most accomplished and well-known Vermont writers.

“We have high school students and teenagers, working poets and professionals; we have dabblers and we have elderly folks,” she says. “So it’s just a big swath of writers, and people who might not consider themselves poets.”

More than anything, Luekhamhan and her colleagues wanted to engage locals, to bring together people who generally work independently. But Luekhamhan, a poet herself, also wanted to see the written word get out of the library and onto the streets.

Dovetailing with “Poetry Alive!” are a number of related events scheduled for Montpelier’s Art Walk this Friday. Bear Pond Books is hanging clotheslines throughout the store and asking area writers to bring in their poems to be displayed on them that day. The Vermont College of Fine Arts is hosting a poetry reading that includes Greg Delanty, Wyn Cooper, Kerrin McCadden, Izabel Nielsen, Sophia Manley and Paige Ackerson-Kiely.

Luekhamhan, who is also the Art Walk coordinator, says all these events represent Montpelier’s effort to expand the boundaries of “art” at this quarterly event.

“We’re really trying to bring music, dance, theater and poetry, as well as the two-dimensional art, to build up participation and excitement,” she says.

“Poetry Alive!” is presented by the Kellogg-Hubbard Library and Montpelier Alive throughout downtown Montpelier and at VCFA through April 30. The Montpelier Art Walk, with attendant events, happens Friday, April 23, 4-8 p.m. Free. Guides to participating venues and poets can be picked up at the library or click here to download.