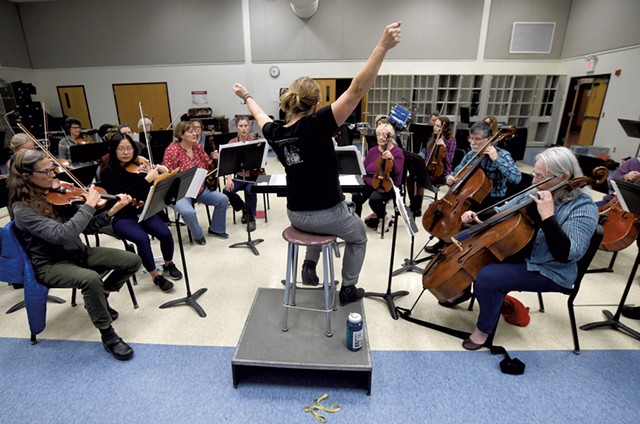 It's a sign of Vermont's vibrant music scene that two community orchestras can thrive side by side: the Montpelier Chamber Orchestra and the Vermont Philharmonic in Barre, the latter being the state's largest and oldest orchestra of its kind. And they have done so for 24 years.

"[The chamber orchestra] started with a group of string players who wanted a smaller experience," says Anne Decker, who has conducted the Montpelier group since 2016. While the 60-member Philharmonic typically includes brass and percussion in performance, she says, the 40-member chamber orchestra showcases more intimate, strings-focused music.

Decker has created an exciting program of such music, "Classically Now," for the Montpelier Chamber Orchestra's fall concerts in the capital city this Saturday and Sunday, November 16 and 17, at the Montpelier City Hall Arts Center. The program opens with "Entr'acte," a rhythmically exacting work for strings by Pulitzer Prize-winning composer Caroline Shaw. Wolfgang Amadeus Mozart's Concerto for Violin No. 4 in D major follows; the well-known training piece for young violinists will be conducted from the soloist's chair by the notable Vermont-born violinist Jesse Irons. The concerts end with another work in D major, Joseph Haydn's Symphony No. 93.

Decker is an aficionado of living composers' new work. The conductor, who earned her master's at Illinois State University, is also artistic director and founder of TURNmusic, based in Waterbury. That new-music chamber group regularly tackles experimental work under her baton — though she treats the position casually in performance, walking between musicians as often as conducting them.

Shaw, the lone living composer on this program, trained originally as a violinist and sings with the boundary-breaking vocal ensemble Roomful of Teeth. Her music typically experiments with unexpected sounds. In "Entr'acte," between hauntingly melodic phrases of bowed notes, the musicians brush their bows across the strings to create a whispering or sighing sound; Decker calls it "ghost-like." At another point, toneless plucking creates a "ticktock" sound.

Decker has been working with the ensemble on rhythm, honing what she calls the piece's "organized falling apart of the sound." "There are these fun moments in the piece where two of the sections go off with their duple rhythms and the other with triple rhythms," she says. "Then they meet on the next beat, and it feels like such a relief when they come back together. That's a lot of counting."

Shaw has played in string quartets, and her compositions are influenced by the canon — an aspect of her work that Strings magazine characterizes as "an unforced affinity for conversing with music from the past." Her inspiration for "Entr'acte" was a Haydn quartet. That's one of the reasons Decker chose Haydn to close the concert.

Though Shaw composed the work originally for string quartet in 2011, she adapted it for string orchestra in 2014 for the Boston-based ensemble A Far Cry, of which violinist Irons is a cofounder.

That connection is merely a fun coincidence; Decker says she invited Irons, who lives in Boston, because "He is, in my mind, a no-brainer for a soloist." Born in Berlin, Vt., Irons graduated from U-32 High School in 2000. He earned undergraduate and graduate degrees at the Peabody Institute in Baltimore, where he studied with acclaimed violinist Pamela Frank. In addition to playing with A Far Cry, he specializes in historical performances with Boston Baroque and the Handel and Haydn Society, both period-instrument orchestras.

Irons and Decker selected Mozart's fourth violin concerto together, but, he explains by phone, "It has some personal significance to me: It was the first piece I worked on with Pamela Frank." In a blog post, Irons writes that he used to tune his violin to Frank's recording of the fourth concerto. "I've probably listened to [it] 100 times," he recalls.

The work is also simply "an incredible concerto," Irons tells Seven Days. "The second movement is gorgeous, and the third is so witty, full of twists and turns and changes of tempo and mood." In that way, the Mozart pairs well with Shaw's piece, he adds, because each work "has so many characters."

"It's always helpful to listen to a Mozart concerto as if it's an opera and each new melody is a new character," he explains.

Irons, who recalls playing with the Montpelier Chamber Orchestra 15 years ago, says he will bring some of his historical training to bear when rehearsing with the group. The violinist has studied the "lineage of teachers and students that maintained the traditional style of Mozart: Mendelssohn, Brahms, Schumann," down to a student of Mendelssohn's whose old age coincided with the dawn of the recording era. Irons will model that documented approach for members of the chamber orchestra.

The violinist will also visit his high school and Montpelier High School with three members of the chamber orchestra to perform selections from the program and discuss it with the students.

Irons was last seen locally playing with the Green Mountain Monteverdi Ensemble of Vermont. "I'm super delighted to come up to Vermont any time I can," he enthuses, "especially [to play] Mozart. It's a little like a Pixar movie — fun for the kids and also fun for the parents."

Decker says she's "blown away" by the musicians of the Montpelier Chamber Orchestra. They include some players who have been with the orchestra since its founding, professional musicians, a high school senior, "doctors, teachers, a big mix of people," the conductor says.

"It's incredible. I'm in awe of these folks," she adds. "They're not getting paid; they do it for the love of the music. It's going to be a great performance."