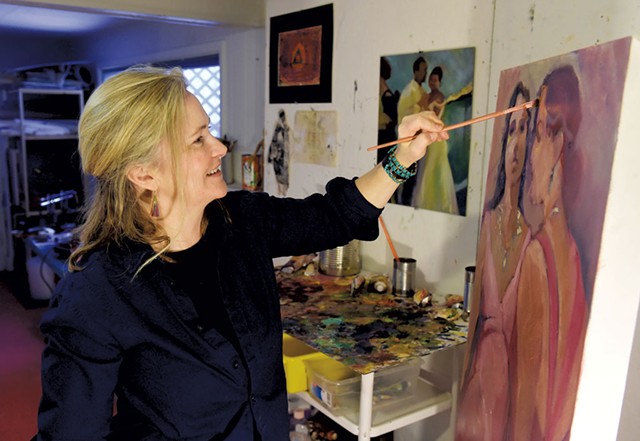 Two willowy women in long pink dresses occupy a narrow vertical canvas in Hope Sharp's Montpelier studio. The painting is unfinished, but it already conveys a private moment between the women, whose heads bend toward each other as if in whispered conversation. Their identical gowns suggest the pair might be bridesmaids. But they're not specific individuals, Sharp says — "This is just one I made up."

A painting hanging nearby features a man and woman dancing — a father and daughter, the artist reveals, at the latter's wedding. Again, the figures' body language hints at their closeness, their mutual affection. The style is expressionistic, and the moody palette only enhances the sense of intimacy. 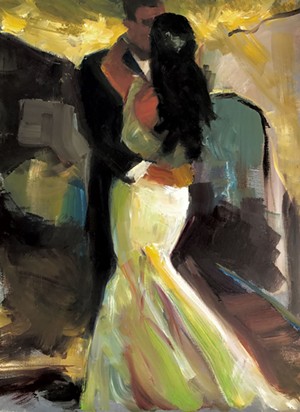 This horizontal work exemplifies a specialty that Sharp has developed over the past couple of years: wedding paintings.

The artist captures a wedding not through posed portraits but through images of people enjoying themselves — socializing, dancing. Generally, her subjects are the newly wedded couple, though some families have asked for more than one painting. (Sharp currently charges $3,500 for a single work and $2,000 for each additional piece.)

With a BFA degree from Pratt Institute and an MFA from Johnson State College (now Northern Vermont University), Sharp, 53, has long experience in both painting and photography. She likes to paint people, but she wanted to avoid static portraiture. So, while earning her master's, she spent a year and a half painting figures in motion at the Contemporary Dance and Fitness Studio in Montpelier. She still goes there about once a week to paint.

It was after she made that initial series of dance paintings, Sharp says, that a friend called and asked her to paint her daughter's wedding. That was two years ago. She's painted five weddings since — "over two summers, mostly," she says — and has another coming up this weekend.

Sharp typically finds a good spot at a reception — something she has to do quickly — and sets up an easel. She sketches in oil and may take some photos for reference. "I've noticed the aunts and uncles, or the people not drinking or dancing, will come and watch me," she says. "I try not to be in the way, but at the same time I need my vantage point. You have to find that thing you really want to paint and just go with it — it's very visceral."

Well before she started painting weddings, Sharp notes, she was accustomed to people watching her work — not to mention commenting. She's been painting with more or less the same group of people for 19 years in Montpelier, in a class led by Warren painter Bill Brauer.

Notwithstanding her academic training, Sharp considers Brauer her mentor. "He's taught me everything I know about painting," she says. Indeed, the sensuousness and mystery that Brauer's figurative paintings exude are evident in Sharp's work — particularly those willowy women in pink.

"It had to rub off sometime," quips Brauer in a phone call. "She's my star," he says of Sharp. "She's somebody who came to the class with natural ability. I don't think she knew what a good colorist she is."

Brauer applauds Sharp's stint painting dancers — a subject he has also explored. Capturing movement is a good way to understand anatomy. "Everyone's just better off learning to paint the body," he says. 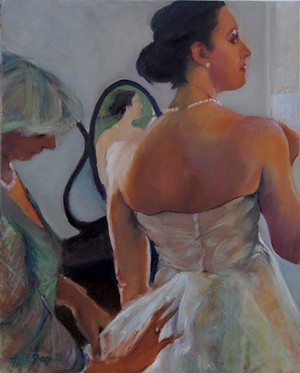 Sharp concedes that painting on-site at a wedding is hard — "It tests my ability to see and produce," she says. But she also declares it fun.

Her experience with painting bodies in motion has resulted in canvases that dispense with realism in favor of soft-focus mood and emotion. Often, faces are turned away from the viewer; subjects are identifiable less by features than by dress or relationship to one another. The slight blur underscores the evanescence of the moment.

Sharp says she'll produce any size of painting requested, but she doesn't advocate for big. To her mind, these works are best thought of as "beautiful, intimate little jewels," she says. "It's not about the venue, the big chandelier — it's about the people."

Given the occasion, her wedding paintings are romantic, but they're not sentimental. One work, viewable on Sharp's website, verges on humorous. A long horizontal, it features a wedding party seated on one side of a table, à la Leonardo da Vinci's "The Last Supper." As in a snapshot in which subjects are caught unawares, the individuals in this image display a variety of casual, unself-conscious, all-too-human behaviors.

Middlebury-born Sharp has two children, ages 15 and 20, and a day job teaching Pilates at a physical therapy office. But what she really wants to do is paint. "I don't want to go begging at galleries," she says. "I just want to do my work."

As for the wedding paintings, she says the challenge of creating them makes her a better artist. "Of course, I have in my head all these wedding paintings in history. But I also have my personal experience with what love is, what you see when people are in love," she says. "It's not always the gesture you think it will be."

The original print version of this article was headlined "True Love"