Montpelier Architect Ward Joyce Is a Warrior for Public Art

A vivid new mural by Chicago artist Mauricio Ramirez covers the side of the Shaw's supermarket in Montpelier — all 150 feet of it. It's the latest and largest of the Capital City's public art installations. Yet it's nowhere to be found in Travel + Leisure's recent write-up of Montpelier as one of "9 Best Small Towns in the U.S. for Art Lovers."

The online magazine briefly observes: "Art is present everywhere, from rotating exhibitions at the State House and Supreme Court building to all the co-ops, galleries, and cultural institutions around town." What it fails to note are the large-scale paintings and photos adorning building exteriors, the floral arrangements on the city's bridges, the sculptures suspended over the river, and the pocket parks and other public-space enhancements.

But no matter. Local architect Ward Joyce would argue that these amenities are meant to improve life for residents, not to impress visiting travel writers.

Joyce, 59, is the force behind many projects that he calls "entrepreneurial public-benefit space work." Aided by grants and sometimes by his former students at Vermont Technical College, he has designed and built parklets — including the very first one in Vermont — as well as pocket parks, bike-rack structures and a human-size chess board. He's been instrumental in the installation of outdoor artwork, including multiple projects on Langdon Street over several seasons. And, Joyce noted, in the course of this work he has climbed ladders to vertiginous heights, repainted weathered surfaces and watered plants.

"Public spaces are where we build our communities and our capacity to work together," Joyce writes in a section of his website called Creative Placemaking. "They are the spaces that define our communities, regardless of scale."

During an interview in his office above Bear Pond Books, he put it like this: "I've been like a warrior for public space. I have this theory that we have the right and ability to help shape our cities."

I have this theory that we have the right and ability to help shape our cities. Ward Joyce tweet this

Luckily for Montpelier, Joyce has like-minded compatriots. He chairs the city's seven-member Public Art Commission, which advises and reports to the city council on all things public art and oversees the jurying, placement and maintenance of public artworks.

"The idea was to formalize public art as a mission," Joyce said, "to put the city on the map as a public art entity."

In 2018, the commission got a grant to develop a public art plan for Montpelier. Joyce credited Paul Gambill, executive director of local nonprofit Community Engagement Lab, with authoring the handsome 88-page publication, which serves as a template for current and future city administrators as they consider Montpelier's visual environment.

The plan begins with a high-minded declaration: "The Montpelier way is a culture of collaboration, thoughtfulness and ingenuity." It goes on to outline guiding principles, place-based strategies, suggested funding sources and ways to review progress over time.

"The commission set out $20,000 a year to pay for projects," Joyce said. "The idea was to give us not a lot of money but enough to make some choices. Our responsibility is to decide how to spend that money."

"I think we've accomplished a fabulous amount, given our meager budget and small volunteer group," commission member Bob Hannum declared. A professional art restorer with a local and international clientele, Hannum noted that the group has "engaged business leaders, private individuals and foundations to contribute financially to our efforts." That effort, he added, is "not just a success but a duty to our taxpayers."

When the pandemic arrived, Montpelier's public art efforts slowed down, as did the funding for them. Now, the commission is getting back in gear.

"One thing we're going to do now is catalog the work we've done and use that as a mechanism to go back to the city," Joyce said.

Per the public art master plan, private donations are part of the funding mix. The mural at Shaw's is a case in point: The supermarket chain and building owner Ernie Pomerleau got on board with the project to the tune of $10,000. The commission and Montpelier Alive met that with $5,000 each.

Most of the "low-cost, high-impact" art projects around the city are the work of Vermont artists, Ward said, but the commission accepts national submissions for larger projects. For the Shaw's mural, it received 55 submissions, paid four artists to develop and present a plan, and finally selected Ramirez for his abstract spray-can design.

"Some local artists were disappointed that we chose an out-of-state artist," Joyce acknowledged. "But we have 11 or 12 projects around town, and all but one are by locals.

"You're never going to please everyone," he added. "That's almost the definition of public art." 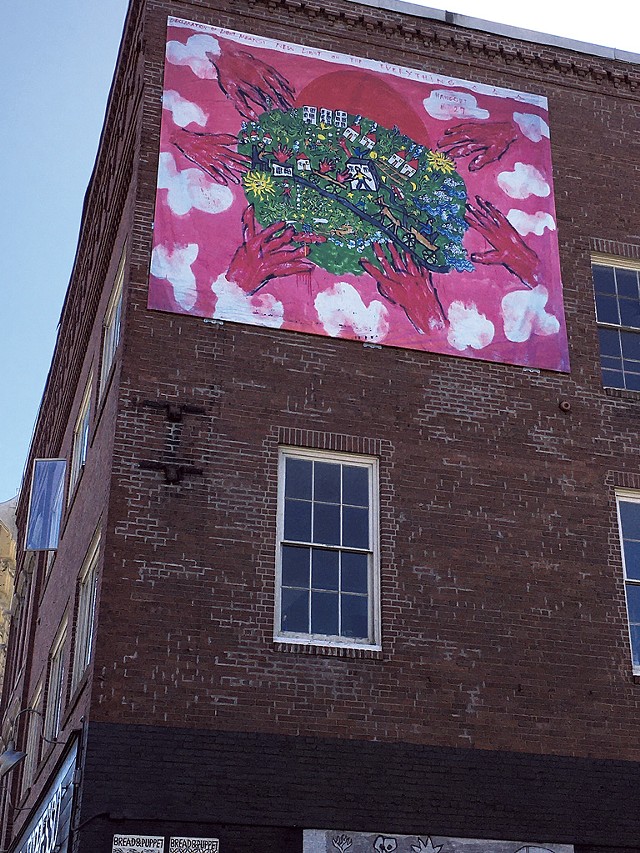 Other recent projects include a banner by Bread and Puppet Theater founder Peter Schumann at Rabble-Rouser Chocolate & Craft; an enlarged painting by Kristine Chartrand on the side of the North Branch Café; and a five-panel plexiglass-and-paint sculpture on Main Street by Barre's Arcana Workshop. Susan Calza's "Red Oculus" installation, stationed in front of city hall earlier this summer, will be supplemented this fall by video screened on downtown buildings.

Joyce noted that the commission just got a five-year grant from the Vermont Agency of Transportation to fund mural making at the interstate underpass on Route 2. Artist Carolyn Shapiro approached the group in February seeking support for a pair of murals at that location. But, Joyce said, "Because Gateway Park has 16 enormous concrete pylons under the interstate, the commission felt it was an opportunity to make it an even bigger project." The area will support a number of murals, with their content subject to VTrans approval.

The Public Art Commission is not the first or only entity to champion such projects in the city. The nonprofit Montpelier Alive has been doing it for years. The two organizations have similar objectives and sometimes collaborate, said local sculptor Rob Hitzig, a past chair and current vice chair of the commission who also serves on the Montpelier Alive design committee. The Shaw's mural was one example, he said; the two organizations also pooled their funds to buy a large projector.

"It's a little confusing for folks, but there's a lot of overlap, and it makes for more art and more ways of doing things," Hitzig said.

He applauded Joyce for his role in those efforts. "Ward is a go-getter with passion and seat-of-the-pants engineering," Hitzig said, noting the architect's willingness to tackle sometimes precarious installations.

For his part, Joyce believes that "individual heroic acts don't have longevity." When it comes to public art and infrastructure, it takes a village.

"The critical thing about public space is to have it institutionally backed, funded and maintained," he said.

"Not all of our citizens approve of what we do, and this is one of the many reasons I am grateful for Ward's leadership," he said. "He is patient and kind with naysayers. I wanted his experience and intelligence and talent and passion on our team."

Vermont's capital city can expect more public-space enhancements as the commission evolves — and Joyce has a birthday. "Architects don't even get good 'til they're 60," he said.