Months After They Got Vaccinated, Kate and Bill Schubart Came Down With COVID-19 | Coronavirus | Seven Days | Vermont's Independent Voice

Months After They Got Vaccinated, Kate and Bill Schubart Came Down With COVID-19 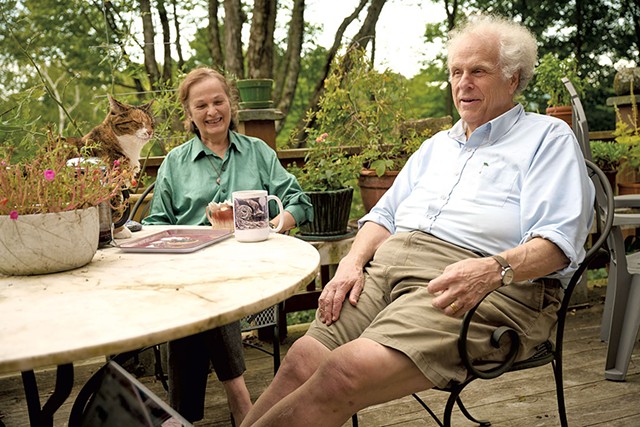 Kate Schubart's Spanish conversation class had just started meeting in person again, after more than a year on Zoom, when she started feeling cold symptoms on August 5.

For a while, she attributed her sniffles, fatigue and slight fever to a summer cold. Schubart, who is 79, had been vaccinated against COVID-19 in February. She assumed that it was unlikely she had contracted the virus; she had kept a low profile over the previous several months, staying at home in Hinesburg with her husband, writer Bill Schubart. She wore a mask almost all the time in public, even this summer after state officials said it was safe for vaccinated people to stop doing so.

But with several out-of-town visitors headed to the Schubarts' home in August, Kate took a COVID-19 test, and the result on August 8 was positive. Bill received a positive test result two days later.

"Most of us had been lulled into the idea that we didn't even necessarily have to wear masks. We were opening up our lives again." Bill Schubart tweet this

"I had been taking precautions," she said. "The Delta variant was just taking off, and so breakthrough cases hadn't been reported here. And we live in Hinesburg; it's rural."

The Schubarts experienced what many Vermonters did at midsummer: a rude awakening to the limitations of the vaccines.

In June and July, Vermont's COVID-19 infection rates were low. Its vaccination rates were the highest in the nation, and state officials were urging people to get out and enjoy the social activities they had been missing. "Most of us had been lulled into the idea that we didn't even necessarily have to wear masks," said Bill. "We were opening up our lives again."

Coming down with a breakthrough, or postvaccination, infection probably wouldn't surprise many people now, just six weeks later. After Vermonters enjoyed a brief respite from COVID-19 fears this summer, the Delta variant, which had been gaining ground around the country, sent infection rates soaring again in the Green Mountain State.

For the Schubarts, enjoying the activities they'd been missing meant visiting with family. Kate had recently connected with her mother's Russian relatives through the DNA testing service 23andMe, and they were headed to Hinesburg in August. Adult children with kids too young to be vaccinated were also set to arrive from Brooklyn and London. And a Serbian exchange student was on her way to live with the Schubarts, preparing to spend a year attending Champlain Valley Union High School.

Testing positive threw the couple's life into brief chaos. The Russian visitors were diverted to a hotel, and the Schubarts met with them outdoors at Shelburne Farms, not over the dinner table in Hinesburg as planned. By the time Kate's family arrived, she had received a negative test result, but Bill was still testing positive. He moved to a friend's condo in Shelburne, taking with him the exchange student, who was vaccinated and had had two negative test results.

"There was so much concern and so much worry that I just made a decision that it was not the time to see them," he said of the visiting families. "We knew we'd see them at Thanksgiving or Christmas or when things settled down."

That was back when it seemed likely that things would settle down, Bill said on Sunday. Now, he's less sure they will, or what that would look like.

"If we finally get our arms around vaccine mandates, this will be like the flu; it will be manageable," he said. "I am reminding myself of what we don't know, rather than what we do know, because so much of what we thought we knew has been wrong."

Breakthrough infections were a surprise this summer to pretty much everyone. The U.S. Centers for Disease Control and Prevention is still scrambling to assess the risk of a vaccinated person contracting COVID-19 or dying from it.

But state and federal health officials repeatedly assure the public that vaccines lower the chance of getting seriously ill from COVID-19 or dying. A CDC study released this month said unvaccinated people are 11 times more likely to die from COVID-19 than those who are fully vaccinated.

The Vermont Department of Health reported on September 8 that among Vermont's 442,000 fully vaccinated residents, 1,906 had tested positive since January. Fifty-one had been hospitalized, and 18 had died.

Bill and Kate are pretty sure where Bill got the virus — from Kate. They're still puzzling over where she got it; they speculate it was at a nearby grocery store, Lantman's Market, which closed for a week in August due to an outbreak, or at a church where she attended a funeral among many people who didn't wear masks.

Most of the couple's cold-like symptoms cleared up within two weeks. But both Schubarts, gourmands who love to entertain and have two kitchens at their home, lost their senses of taste and smell. Those are only now slowly returning.

"There were things I was eating that tasted like old corrugated pizza boxes," Bill said. The virus also left them with a feeling they described as lassitude. Bill spoke of beautiful, clear summer days that he'd ordinarily spend working out in the yard. Since the diagnosis, he hasn't had the energy.

He also thinks that the virus has caused a kind of depression.

"It's not clinical depression; it's circumstantial depression — what we used to call in the '60s and '70s 'existential dread,'" he said. He attributed it to the harm and uncertainty of the pandemic. "Those are the things that have lingered with me."

Kate had to share news of her infection with everyone in her Spanish conversation class, which meets in the parish hall of the United Church of Hinesburg. She's grateful nobody in the class tested positive.

"COVID has been a lesson in what we don't control," she said.

Shortly before his own positive test, Bill had attended an outdoor dinner in his honor at the Vermont College of Fine Arts, where he had served as a board member for 12 years, the last five as chair. He notified attendees afterward that he'd received a positive test.

Bill, who grew up in Morrisville, is a public intellectual who has served as a board member and adviser to more than a dozen Vermont nonprofits and educational institutions.

He's taught courses on music, technology and business at the University of Vermont and has published several books. And he's a longtime and active analyst when it comes to governance, be it private, public or individual. He writes regularly on the management of Vermont's health care system and other institutions. Observing the pandemic and the state's response, Schubart said he tries hard to stay open-minded about people who don't follow health guidelines aimed at stemming the infection rate.

Asked about COVID-19's likely impact in Vermont and the world at large, Bill, like Gov. Phil Scott's administration, sees vaccinations as the best way out of the pandemic.

"I am trying to modulate my anger against those who believe that vaccines and mask mandates diminish their freedom and have no sense of the responsibilities that come with freedom," he said. "I am trying hard to remain open to engaging with those people."

The original print version of this article was headlined "Breaking Through"