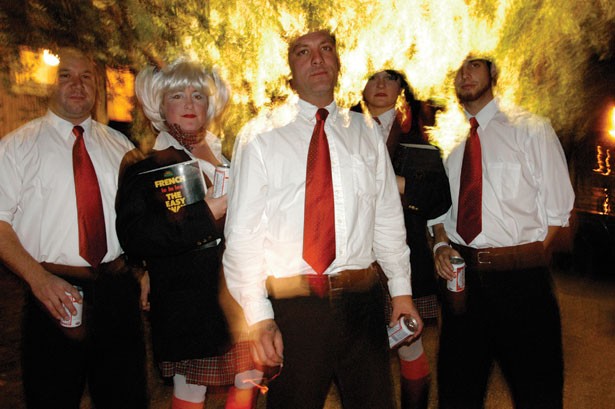 Is there any holiday better than Halloween? Christmas is overblown and über-commercialized. Valentine's Day is pressure-filled if you're in a relationship and depressing if you're not. Thanksgiving is little more than an excuse to celebrate gluttony in the warmth and comfort of your dysfunctional family. New Year's Eve is a perpetual let-down. And Kwanzaa . . . well, does anyone know what Kwanzaa is, really?

Halloween is clearly the cream of the holiday crop, and this year it's even better than usual. Since All Hallows Eve falls on a Wednesday, there's an entire week's worth of ghastly galas, creepy concerts and frightful festivities to chill the soul. Here are some of the options that caught our pointy vampire ears.

Originally a stage production in London, The Rocky Horror Show was the inspiration for Jim Sharman's wildly popular film, The Rocky Horror Picture Show. For more than three decades, cross-dressing fans of all shapes and sizes have filled theaters across the world to take part in the kinky, gender-bending musical adventures of Brad Majors, Janet Weiss and the "sweet transvestite from Transsexual, Transylvania," Dr. Frank-N-Furter.

This Wednesday, the interactive cult classic, er, comes to the Higher Ground Showcase Lounge for two performances. Ironically, the building that now houses the area's premier music venue was previously a movie theater, which frequently held midnight showings of the film version.

"Virgin Kits" for first-timers can be purchased for an additional $3.

Do you like devilish debauchery? The Dirty Blondes do. But then, you probably already knew that, since Seven Days readers recently bestowed upon them the Daysies award for "Best Unsigned Band in Vermont." This Saturday the band holds court as the headlining act at the cheekily titled "Ghouls Gone Wild" party at the Higher Ground Ballroom. Hot Neon Magic joins in the fun, performing twisted versions of '80s classics. DJ Precious spins late-night dance music. There will also be go-go dancers, give-aways and cash prizes for the best costumes.

Nothing says Halloween like MediterrAsian jazz, right? Well, probably not. But Halloween is all about the unexpected. Fortunately, so is central Vermont's finest world-jazz ensemble, 35th Parallel, whose spellbinding sonic witchcraft never fails to confound and inspire. Catch them this Saturday at Montpelier's Positive Pie 2 for the All Hallows Eve Masquerade Ball. Prizes will be awarded for the most imaginative outfits.

Masquerade balls seem to be all the rage in the state capital this weekend, but, as always, the Langdon Street Café is putting a fresh spin on an old idea. For their fourth annual anniversary shindig, the cozy coffee house boasts the following: oddities, girls, The Amazing Wolf Woman, Amazon Chuck, Albino Alligator Man, girls, The Vamp Tramp Show, Wild Beasts, The World's Smallest Menagerie and more girls. Yikes! Come in costume and prepare to be awed, amazed and very likely appalled. Burlington's kings of klezmer, Inner Fire District, provide the tunes.

Reggae and Halloween, together at last! If you dig costume parties but crave island grooves, Nectar's has just the thing for you this Saturday night with two of the Northeast's finest up-and-coming roots-reggae acts. Boston's Spiritual Rez have been tearing up clubs all over the country with their funk-infused blend of reggae and soul. New Hampshire's jazzy reggae outfit Roots of Creation open the show, and rootsy Americana act Old Silver Band throw a 'tweener set in the middle. Eerie, mon.