"When we walk, we naturally go to the fields and woods: what would become of us, if we walked only in a garden or a mall?" asked Henry David Thoreau in his posthumously published 1862 essay "Walking." What, indeed? One shudders to think.

Fortunately, any dire consequences can be pleasantly avoided at the Gordon Sculpture Park in Monkton, where walkers can experience nature and artworks in tandem. Mown paths take visitors past seven works sited in a wooded vale and around an open field of rolling hills framed by stunning mountain views.

One of the seven sculptures is an installation of Thoreau's essay itself. "Walking Book," by Genese Grill and Grace Corbett, is a series of canvases mounted on four roofed panels on which walkers can read passages from the essay, hand-painted in colorful script and illustrated in a style reminiscent of the 18th-century poet-artist William Blake. 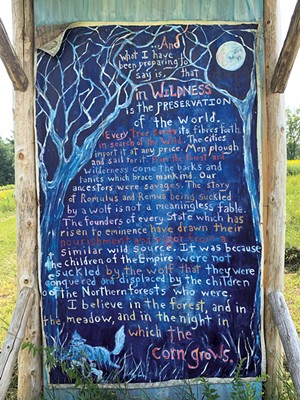 Walkers and art enthusiasts have likely heard of Vermont's larger sculpture parks, among them Cold Hollow in Enosburg Falls and Lemon Fair in East Shoreham. The Gordon Sculpture Park, which opened in 2017, is a project of the Willowell Foundation, an educational and community-oriented nonprofit. The park sits within the foundation's idyllic, 230-acre parcel of farmed and wild land.

Willowell was founded in 2000 by Matt Schlein, a Westchester County, N.Y., native who titled the place after his grandmother's poetically named farm, he said during a brief stroll on the land with a reporter.

Schlein taught at nearby Vergennes Union High School for about six years before determining that many students needed an alternative to traditional education. At Willowell, he created the Walden Project — Thoreau's spirit suffuses the place — for juniors and seniors who apply from several local public high schools. The program uses the outdoors as a classroom to teach arts, sciences and humanities in an interdisciplinary manner.

The same approach is used with preschoolers in Willowell's Wren's Nest Forest program and with elementary students in the New Roots Project, a program created during the pandemic. Students gather around an outdoor fire or in structures in the woods or fields to learn. Much of their days are spent walking — and not a few lessons are taught using the sculptures.

Meghan Rigali, director of the sculpture park and a New Roots teacher, met with this reporter under a tree by the parking lot just off Bristol Road. Rigali has recently re-sited some sculptures and increased the number of artist residencies at Willowell, resulting in two new sculptures. New road signage is also under development, she adds. For now, look for the log piles of the Monkton Wood Bank, a heating and fuel assistance project of Willowell and local volunteers, next to the turnoff from Bristol Road.

Despite being on crutches due to a knee injury, Rigali had just finished a day of helping summer campers grow their own food in the vegetable plot. Visitors can access the sculpture park during daylight hours after 3 p.m. on weekdays, when campers and students leave, and on weekends (barring educational programming).

Rigali pointed out the Edible Forest Pathway, which leads from the parking lot to the sculptures. At the bottom of the path, the first sculpture to appear is "Mobile Mural Project," a 16-foot-wide panel collaboratively painted by Rigali and Ethiopian graffiti artist Behulum Mengistu in 2017.

Mounted on the ground and partly obscured by plants and flowers (as were other sculptures), the colorful mural depicts a symbolic meeting between the two artists' cultures. A ghostly white winged deer chimera reaches a Michelangelo-like hand toward a dark-brown Walia ibex; their energies, depicted in blocks and swirls of color, respectively, meet in a burning cattail. The painting is "reflective of the spirit of friendship between the two artists and the act of cultural recognition," according to the artists' statement. 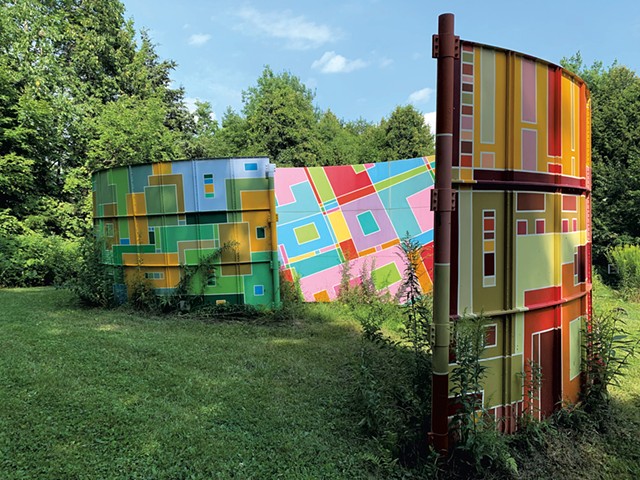 Artists represented at the park came by invitation, said Rigali, though she plans to implement a call to artists in the future. In non-pandemic times, resident artists stay at the Artists' Cabin, a winterized house located on the highest point of the sculpture field. Residencies are meant to invite full immersion, exploration and experimentation with the land, Rigali said.

Farther along the path, Mexico City and New York City artist Marela Zacharías created the park's first sculpture, "Azimuth," with the help of students in 2012. Inspired by her native country's pre-Columbian architecture, she set two semicircular sections of a dismantled metal silo, of Richard Serra proportions, in a shape roughly approximating an infinity sign. Each of the four sides' painted geometric forms features a different color scheme.

"The colors must have been bright and beautiful next to the background of the clouds and the trees," Zacharías wrote in a statement of a pyramid at the archaeological site of Xochicalco in the Mexican state of Morelos. That's certainly true of her own creation.

From there, the path leads up to the sculpture field. Boston-based Maeve Doolan's "Sisyphus," from 2012, stands six feet tall at the start of the field's mown paths. The sculpture's multiplied human form is fashioned from bent rebar. It has two sets of feet and several pairs of hands, all carved from flat blocks of marble, caught in a frenzy of positions. Like a cubist painting made three-dimensional, "Sisyphus" suggests the endless motions of the mythological Greek figure who was doomed to roll a boulder uphill for eternity.

Downhill to the right lies "Walking Book"; from there, a path leading left toward the Artists' Cabin detours to a shady nook. In it stands a 2019 work titled "The Infinite Eye" by Engels the Artist, a self-taught artist who was born in Haiti and lives in Brooklyn. Engels was the first artist to participate in a five-year residency collaboration of Willowell and the Neuberger Museum of Art at SUNY Purchase College in New York. 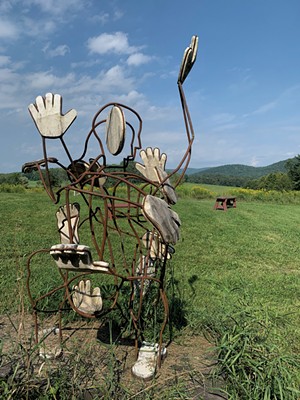 Working with reclaimed materials such as burlap and old wooden frames, Engels often punctures and then repairs his works. His piece at the Gordon Sculpture Park features a vertical slab of concrete that is faintly pink at the center; a tangle of bent metal shards surrounds a section of pipe that punches through.

At the field's center sits "D# Echo," made by Brian Raymond and Nick Campolo in 2017. Shaped like a giant geometric boulder that stands 16 feet high, the sculpture captures the eye and the sun with its multifaceted surface clad in reflective metal.

Visitors can actually enter the sculpture — on a 93-degree day, this visitor did not — and trigger a sound installation of the artists singing in the key of D sharp minor. In fact, movement in certain interior spots sets off different recordings, allowing "the experience of the sculpture [to] become an echo of your own expression," notes the artists' statement.

Along the path back to "Sisyphus" stands a series of rectangular metal plates mounted on rebar poles. "Phi," a 2017 work by Ethan Mitchell, apparently illustrates the golden ratio — though exactly how may be the province of Willowell students and teachers.

For everything else at the Gordon Sculpture Park, as Thoreau would say, nature is the only teacher needed.

The Gordon Sculpture Park at the Willowell Foundation is located at the intersection of Stoney Meadow Ln. and Bristol-Monkton Rd., Monkton, 453-6195, willowell.org.