Jessica Demeritt was dutifully taking notes when the condition of local roads came up in a June 14 meeting of the Monkton Selectboard. But her ears perked up when a town official reported that the highway crew planned to address flooding of a road near Demeritt's home with a tried-and-true method.

"He said in an almost offhanded way, 'They're going to trap the beavers on Hollow Road,'" Demeritt recalled. "My head just about whipped around when I heard that."

Demeritt credits the industrious rodents with creating the rich wetland habitat in her neighborhood. The idea of trapping and killing the architects of that environment struck her as foolish.

She has since helped lead a grassroots effort to convince town leaders to embrace more humane ways to deal with conflicts with beavers, which are plentiful in Addison County and throughout Vermont.

"We said, 'Hey, wouldn't it be cool to try to work with the beavers instead of trying to get rid of them?'" Demeritt said.

As a result of impassioned pleas from like-minded wildlife lovers at a subsequent selectboard meeting, the beavers won a reprieve — for now.

Residents convinced the board to allow them to form a volunteer committee to explore nonlethal ways to deal with beavers when their woody waterwork creates headaches for homeowners, farmers or road crews. The move follows a similar shift in towns such as Shelburne, which in 2019 formed an Animal Coexistence Subcommittee. Its members drafted a policy declaring that Shelburne "values all species as an integral part of the community and advocates a harmonious coexistence behavioral style whenever interactions occur."

"We are just trying to save some beavers." Beverly Soychak tweet this

In Monkton, committee member Beverly Soychak said she hopes pausing the town's trapping plan will allow time to install a device known as a beaver deceiver on the beaver dams that are causing flooding in the Hollow Road area and elsewhere. The devices make use of beaver-proof culverts so that water keeps flowing through dams, rather than pooling.

"I just want to empower people to know that there are other options to trapping," she told Seven Days.

Monkton's beaver hubbub is the latest illustration of the charged debate between tradition-minded Vermonters who want to preserve hunting and trapping practices in the state and wildlife activists who seek to curtail them.

Vermont allows beaver trapping for sport as well as to manage "nuisance" animals. The sport-trapping season is late October through March, when their thicker pelts have commercial value. But troublesome beavers, such as those whose dams cause flooding on roads or private property, can be trapped and killed anytime.

Between 520 and 660 such nuisance beavers were killed by licensed trappers annually between 2018 and 2020, said Chris Bernier, a wildlife biologist with the Fish & Wildlife Department. That may sound like a lot, but it's fewer than three per town each year, he noted.

Tens of thousands of beavers live in Vermont, Bernier said, and the department supports efforts to protect them.

"We are trying to allow beavers to persist in these areas so they can go about their business and increase the incredible habitat they create," Bernier said.

Beavers were virtually wiped out in Vermont by the 1850s due to overhunting and habitat loss. The department reintroduced beavers from New York and Maine in the 1920s and 1930s. Their numbers rebounded, and limited hunting was again allowed starting in 1950. So many beavers live in Vermont today that the department no longer issues permits to relocate them, arguing that doing so will just foster competition for habitat elsewhere.

Passionate debates about the fate of the semiaquatic creatures — which are the largest rodents in North America and can weigh 40 to 50 pounds — still occur over how to best manage their populations.

"These cases sometimes can blow up and become real nightmares," Bernier said.

Trapping requests from state and local road crews make up about half of the beaver reports the department receives, said Tyler Brown, a state wildlife specialist. Brown helps install about 15 to 20 beaver control devices annually. This includes fencing that keeps beavers away from culverts and baffles that help control water levels behind beaver dams.

With an annual materials budget of only $5,000, however, Bernier acknowledges the department doesn't have the resources to fund all the beaver protection projects that people might desire. In addition, the devices don't work in every situation, he said.

"At the end of the day, some of these sites still have to be trapped — even with these structures installed," Bernier said.

The Monkton Highway Department received state approval for a trapper to remove beavers causing flooding at the western end of Hollow Road after a device installed by the state failed, explained Stephen Pilcher, chair of the selectboard.

He said he could not confirm reports by residents that beavers were killed on Church Road at a culvert that was plugged up by beavers.

Soychak said she was appalled to learn the town and private landowners were still trapping beavers. She said the practice is "barbaric" and doesn't work.

"If you kill beavers, another family is just going to move in and you're going to have the same problems," Soychak said.

She was involved in an effort two years ago to solve a beaver problem at her home on nearby Cedar Lake. Beaver dams were causing water levels to rise and flood lakeside homes, and homeowners sought a humane solution. 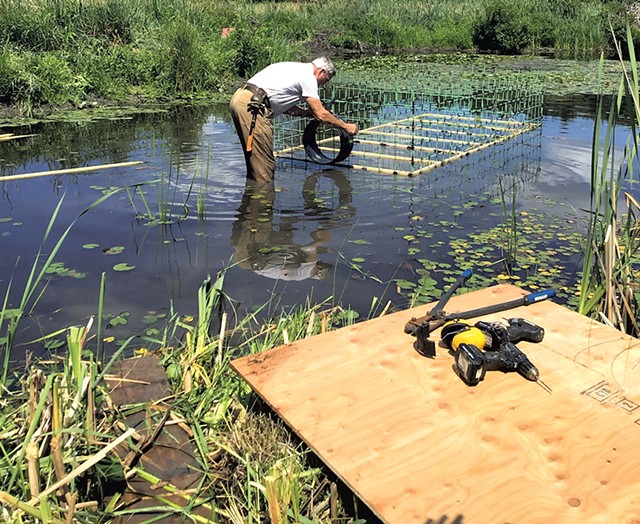 They hired Grafton-based beaver expert Skip Lisle to install one of his beaver deceivers to manage lake water levels. The custom-made devices, which vary in design, preserve water flow by installing a culvert through the animals' dams. Wire cages around the openings prevent beavers from plugging them.

The reason, Lisle said, is that despite the increasing environmental awareness about the value of wetlands, Vermont still prioritorizes its agriculture. Many of its residents view wetlands as potential cropland.

"So there is virtually no appreciation for beavers, and a lot of people just want to kill them," Lisle said.

The new Monkton committee, which calls itself Working With Wildlife, has won a $3,000 grant from the Stowe-based nonprofit Protect Our Wildlife Vermont to fund such devices. Volunteers are working with a private property owner on Hollow Road and also started a GoFundMe page to raise enough for five devices.

Pilcher, the selectboard chair, said he's pleased the committee is exploring nonlethal options, but he's taking a wait-and-see approach before agreeing to commit the town's limited road budget to the cause.

He's seen firsthand the damage beavers can do. Beavers near his home "take down every tree within a certain radius," which is not something everyone appreciates, he said.

Demeritt appreciates it deeply. The animals have been "beaver-scaping" the Hollow Road area for years, transforming it into a wetland teeming with life, she said on a recent visit to the spot.

As she surveyed the marshy expanses on either side of the road, she pointed to game trails through the cattails and a great blue heron perched on a beaver dam in the distance.

In addition to the fish, waterfowl and frogs that call beaver ponds home, the areas serve as important travel corridors for larger wildlife such as bear and bobcat, she said. These routes are more important than ever as the climate changes and animals are forced to migrate to suitable habitat, Demeritt said.

And, though it may seem counterintuitive, the wetlands created by beavers actually reduce flood risk. Dams slow runoff, and the dense vegetation in wetlands absorbs water like a sponge during major rain events, a feature that is increasingly vital as the climate changes, she said.

Demeritt understands that these values can seem secondary to a town crew trying to keep roads passable or to a homeowner watching their backyard flood. But they deserve consideration, she said.

While the up-front cost of building a beaver deceiver is more expensive than simply hiring a trapper, studies have shown the long-term cost is far lower, said John Aberth, a wildlife rehabilitator from Roxbury.

Aberth wrote a beaver management plan for Salisbury and rehabilitates infant beavers orphaned by trapping. He's exasperated when people argue for sticking with trapping because it's a tradition.

"I say, 'You've always done it because it's never worked!'" he said.

Soychak admits that her activism seems to have "ruffled some feathers" in town, but she said that's not her intention.

"It's not rocket science," she said. "We are just trying to save some beavers."

The original print version of this article was headlined "Beaver Believers"