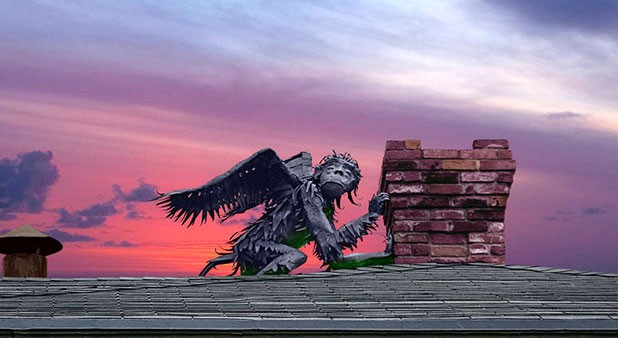 If you’ve spent any amount of time in Burlington, you’ve probably spotted the flying monkeys. The metal sculptures, that is, that lend a startling profile to the rooflines of Union Station and the Main Street Landing building at Lake and College streets. To longtime locals, the six simians are iconic public art and the stuff of legend. Not to mention whimsy.

Last week, the man who created the monkeys, Steve Larrabee of Jericho, died at age 61 of an aneurysm, reports his dear friend Rik Carlson. The artist and master cabinetmaker leaves behind his mother and a brother in Vermont, and another brother in New Hampshire.

“Steve was just the most talented person I ever knew,” says Carlson, 63, the former owner of a waterbed store called Emerald City, who commissioned all the monkeys over a period of 30 years. The original pair arrived at Carlson’s first shop, at Bank and St. Paul streets, in 1976. Emerald City moved to Shelburne Road in 1986, and the monkeys, of course, went along. Local lore includes the story of one monkey being stolen, in 1992. It was eventually recovered, but not before Carlson had a replacement made. “The third monkey is made of copper instead of steel,” he notes. “Steve just got so much better at them.”

Now, half a dozen monkeys have one of the best views in town: the waterfront. The original couple straddle Union Station, along with a pair of babies that were “born” to them in 2004. No. 3 monkey is a female in heat, baying at … whatever, above the Main Street Landing Performing Arts Center. That’s why Larrabee’s final monkey — called the “Rogue Lover,” says Carlson — has his eyes on the howling female. “If you had binoculars, you could see that he is very excited about her,” Carlson hints.

Steve Larrabee will be missed, but he left a legacy of ingenious artwork that will live on — to startle tourists and please locals — for a very long time.