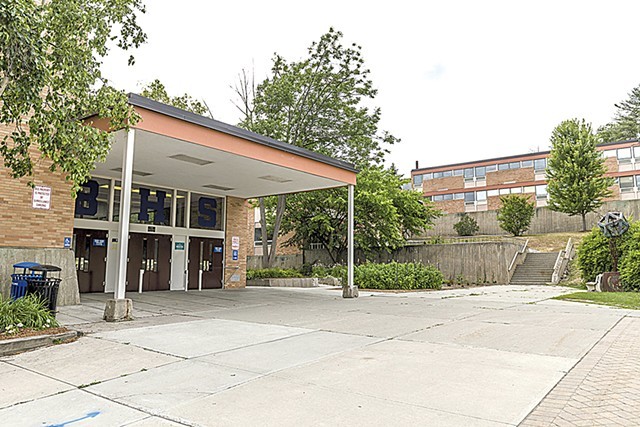 The Burlington School District's $210 million plan to replace its high school and technical center has hit a snag.

The city wants the district to limit any voter-approved bond for the project to around $150 million — meaning school leaders must find a way to make up that $60 million gap or slash costs.

"We are at a really important juncture," Superintendent Tom Flanagan told commissioners at a school board meeting Tuesday night. "We have a challenge right now we need to solve."

In April, school board members unanimously approved a conceptual design for a new high school and technical center that would be built on the current campus on Institute Road. Architects estimated the new building would cost $181.3 million, while the school district would also have to shell out an additional $29 million to remediate and remove polychlorinated biphenyls, or PCBs, from the campus. Those toxic chemicals led the district to close the high school in the fall of 2020.

District officials want to put a bond before voters this fall as they try to get the project built by August 2025.

But city officials have told the school district that they're not OK with that large of a bond. The city and school district have a combined borrowing capacity that limits how much debt the two entities can carry each year. Going above that limit can be detrimental, Dan McLean, a spokesperson for Mayor Miro Weinberger, told Seven Days in an email.


"It will be a major challenge for the City and [Burlington School District] to build the planned new high school and technical center project within the constraints of this debt policy," McLean wrote ahead of Tuesday's meeting. "Borrowing too much could threaten the City's credit rating and result in a higher bonding interest rate for this project — and all other municipal and [school district] borrowing."

Burlington School Board Chooses Design for New High School, Tech Center
By Alison Novak
Education
Additionally, McLean wrote, the $150 million the district cited in its memo isn't a sure thing, and the sides have yet to settle on an exact bonding amount. The city and school district must agree on an amount and approve it by mid-August in order to put the bond to voters in November, he wrote.

At the meeting Tuesday, Superintendent Flanagan described one possible way to raise $25 million for the project: using $10 million in federal funds; $5 million from school district surplus money over the next five years; and potentially $10 million from a capital plan voters approved in 2017.

Flanagan also proposed cutting costs by relocating several Burlington Technical Center programs — such as manufacturing and automotive — to the Burlington International Airport, where the tech center has an aviation program. By housing additional tech center programs there, it would shrink the footprint of the new Institute Road building and potentially save some $20 million.

Even with those changes, the district would still be short about $15 million. Flanagan said he has heard there is federal money to pay for the remediation of PCBs, but it's unclear how the district would get that money. The state has also set aside around $20 million to address PCB contamination in Vermont schools, but  Burlington would likely get just a portion of those dollars, Flanagan said.

Vermont Again Adds New PCB Guidance Ahead of Testing in Schools
By Alison Novak
Off Message
There's also a question of whether the state or feds — or other municipalities — will help shoulder the cost of the new tech center. McLean, the mayoral spokesperson, said Weinberger thinks Burlington taxpayers shouldn't pay for it all, since more than half of the students who attend tech center programs come from other school districts. School board members from other Chittenden County districts have also suggested a more collaborative approach to designing and building a regional tech center.


No matter what course the school district takes, it will have to act fast. Flanagan proposed a special board meeting next week to continue discussing next steps. At the end of June, the public will get a chance to see a schematic building design. In July, school board members will review a more refined cost estimate for the project, ahead of approving a bond proposal in August.

"We're seeking support and funding," said Flanagan, "and there's still time to do that."