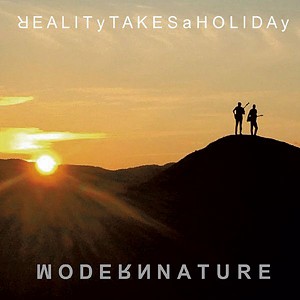 Shelburne's Modern Nature started off, as many bands do, playing covers in local bars. In fact, their debut 2013 LP, Meet Modern Nature, was composed mostly of covers with a handful of original tunes mixed in. A love of angular pop rock was evident on those originals, and the band began forming its own sound by 2014's What Color.

Once a four-piece, the band has slimmed down to its Mark II version, with Mark Bouchett on guitars and lead vocals and Mark Wetmiller handling bass and drums. The two cowrote 10 tracks of hook-laden pop rock for their new, partially recorded-in-quarantine record, Reality Takes a Holiday. The record is a nice slice of breezy jangle, at least on the surface.

I'm pretty sure some of this is my own mindset coloring how I've listened to music lately, but these days it seems like most musicians are looking back on their songs, either in longing or in a confused state of anger. The modern age isn't exactly being kind to us, so it makes sense, I suppose. "How the Past," the record's opening track, captures these feelings. "There's no burden you carry so heavy than the burden of wasted time / and the moments you never bothered and the love you left behind / that's forgiveness that you never find," Bouchett sings over a Byrds-like arrangement.

Modern Nature have an air of the classic SoCal folk-rock sound, whether it's Bouchett and Wetmiller's harmonies or the twang of the guitars on songs such as "It Only Matters" and "Undone." The influence is a flattering one, though it does run up against a strangely dry and reserved production — particularly the drum sound, which is screaming for some reverb. The vocals are a little too high in the mix for my comfort, but Bouchett's voice hangs solidly in mid-register, so I can see why it was pushed to the forefront.

Lyrically, the band mostly dwells in contemplative despair. "Tears of the Soldier" is full of melancholy wondering, such as "Where is the sunshine? Where is the laughter?" The themes of regret and wasted time are strong throughout Reality Takes a Holiday. Considering how many of us are sitting in stasis while the modern world rages like the last drunk tossed from the bar at 2 a.m., I'm guessing these themes might resonate with potential listeners, though not cheer them up.

As a nod to their cover-band past, Modern Nature include David Bowie's "Slip Away." They handle it ably, layering a thick vibe synth atop Bouchett's guitar and largely capturing Bowie's eerie, bruised lament: "Oogie knew there's never ever time / Some of us will always stay behind."

Reality Takes a Holiday is a surprisingly dark record from Modern Nature, even as it masquerades as sunny, lo-fi pop rock. Download or stream it at modernnatureband.com.