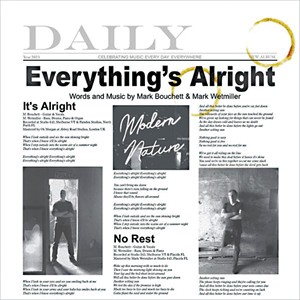 After the psyche-strapping wear of the coronavirus pandemic and the nerve-twisting tension of a presidential election and its rocky transition, we're all a little bludgeoned and bruised. But summer's here. And Modern Nature's new album, Everything's Alright, offers both a soothing title track and moments of musical succor.

The YouTube bio for the Shelburne-based band names Elvis Costello, the Beatles and the Moody Blues as influences. Some of those hold, but I could argue for other echoes in guitarist-singer Mark Bouchett and co-songwriter-bassist-drummer Mark Wetmiller's accessible pop: Belle and Sebastian for tuneful whimsy and the Smithereens for blasts of exuberance.

Beyond influences, the band's sixth album offers a spectrum of mixed emotions — the sorts we may feel as we pocket our masks and move closer than six feet to people outside our tightest social circles.

A Vermonter's weariness colors "Seven Days Into Spring." "Seven days into spring comes the snow again," Bouchett sings, followed by "Winter may be over, but I'm still cold / standing outside with the snow coming down is getting old." Lucky for us, this spring brought little snow, but shaking off the chill did take weeks. With the song's near-waltz feel, one can imagine Bouchett and Wetmiller dancing circles around the studio, rolling their eyes and trailing electrical cables. (That title also had this listener sensing a sly wink to this publication.)

Sometimes the songs hint of frustration and urgency. On "The Messenger," Bouchett laments, "There's nothing real that we can count on anymore and the mirror just reminds us that we're running out of time."

"No Rest" imagines waking up to an overly full to-do list: "Much too busy to live, much too busy to die." Bouchett sings of a thundering deadline clock, "All this better get done before the sun goes down," and, later, "before you're 6 feet down." Yikes.

However, the album's title promises optimism. And there are hopeful moments. "The Last Dance," for instance, points toward possibility: "Gonna take your hand and run away / Run away with me / Walking in the sand on a summer's day, feeling young and free."

As long as scary COVID-19 variants stay away and the economy continues to recover, listeners can join Modern Nature in appreciating tiny, tender moments and feeling all right.

Everything's Alright is available at modernnatureband.com.