Moderator Shuts Down Online Debate on ONE Drug Use 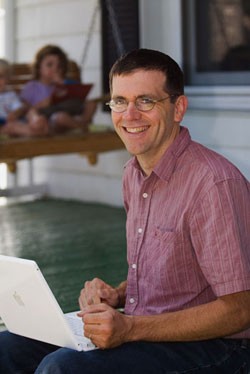 The moderator of the popular Front Porch Forum shut down an online discussion of drug use and crime in the Old North End last week when residents began hurling verbal insults at each other.

Michael Wood-Lewis, founder and moderator of Front Porch Forum, said it was the third time in the forum’s eight-year history that he’s had to step in and cut off discussion of a specific issue. The others revolved around “dog poop” disputes between cat and dog lovers, and over the historic preservation of slate roofs.

“When the public well becomes poisoned,” Wood-Lewis said, “it’s hard to get it back on track.”

Complaints about drug use in an area around Murray Street, which runs between Barnes Elementary School and St. Joseph’s, a Catholic school, started about three weeks ago. But the spirited debate, on the Old North End Central forum, turned personal after one resident posted a video of himself confronting people whom he believes are dealing and using drugs. At one point in the video, the two sides get into a physical confrontation.

Some forum members responded by saying the resident provoked the fight. Others defended his actions, saying he videotaped the activity out of frustration with the lack of police response to alleged drug dealing in the area.

Wood-Lewis said a handful of residents have quit the forum over the discussion. About 650 households have signed up to participate in the Old North End Central forum, one of about 130 forums throughout Chittenden County that have attracted about 10,000 users.

“This space is about creating a space for everybody to listen in and weigh in,” Wood-Lewis said. “Some people who are part of these forums tell us they feel isolated in their neighborhood, and this is one way for them to feel connected. They are not interested in Front Porch Forum helping them to lose that connection again.”

Meanwhile, residents involved in the vigorous debate want to bring the discussion offline and into the real world. Sarah Judd, the development director at Burlington College, said she is trying to organize a meeting of FPF members to talk about crime in the Old North End.

Judd said she hopes to bring together landlords, residents, police, business owners and members of the local immigrant community by month’s end or in early August.

“People may not agree with how he’s going about exhibiting his frustration in terms of dealers and drug use,” Judd said, referring to the resident who videotaped the alleged drug users. “But nevertheless, it’s an example of collective frustration over what seems to be an increase, at least in visibility . . . of drug use and dealing in drugs.”

Whatever the merits of the complaints, some city officials have been watching the FPF discussion closely. Burlington Police Lt. Emmet Helrich said he subscribes to the Old North End forum and tries to follow up on concerns about police apathy. Helrich said when staff levels allow, police patrol the Murray Street area, near the intersection with North Street, on foot.

“If it’s late at night, we don’t come in with our lights on and V-8s roaring,” he said.

“People are talking about it more,” Davis said. “So the reality and the perception of increased crime are converging.”

Wood-Lewis said that, while he regrets the tenor of the online conversation, he’s “thrilled” that residents might come together to discuss the underlying issue. As for re-resuming it online, Wood-Lewis said he plans to wait a couple weeks.