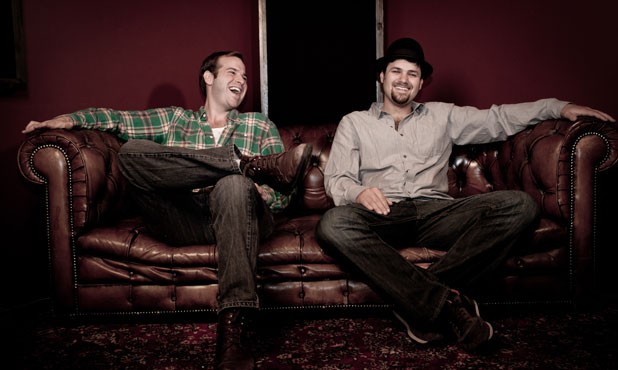 Since 2010, Burlington’s Signal Kitchen has been a hot spot best known for its soirées during the South End Art Hop in September and occasional under-the-radar shows over the rest of the year. Though the owners of the recording-studio-cum-underground-rock-club didn’t exactly avoid publicity, they didn’t seek it out, either.

“We were kind of holding off on an interview,” says Dave DeCristo, who submits to just that with Seven Days along with his business partner, Alex Lalli, at the freshly poured concrete bar in the refurbished lounge of their two-story recording, rehearsal and performance space. “We were just trying to build the place up.”

Recently, shows at the lower Main Street venue have been increasingly regular. SK now draws heavy-hitting acts both imported, such as Boston’s Stepkids, and domestic, such as Burlington’s Chamberlin and Rough Francis. The space hosted several shows at this year’s Green Mountain Comedy Festival in May. This week marks the venue’s unofficial coming-out party as it hosts a pair of shows for the 2012 Burlington Discover Jazz Festival: live EDM trio Moon Hooch on Thursday, June 7, and keyboard wizard Marco Benevento on Friday, June 8.

Signal Kitchen began as essentially a rehearsal space. “But we quickly learned that doing rehearsals is kind of a bummer,” says DeCristo, 31. Lalli, 30, elaborates that scheduling and helping bands set up became a distraction for the pair, who were often trying to mix records upstairs. SK still functions as a practice studio for a handful of local bands. But DeCristo and Lalli have since turned their focus toward hosting and recording concerts — the latter both sonically and visually.

“This is how we can make our mark and develop our brand in a way that not an everyday recording studio or venue space can do,” DeCristo says.

“And I think it’s the reality of the music business, too,” adds Lalli.

DeCristo, a Burlington native, and Lalli, from Boston, teamed up after DeCristo returned from living in LA for three years, where he had dropped out of culinary school but discovered a knack for sound engineering and design. Lalli, a Berklee College of Music alum, had been working at Lion’s Den, a Boston-based recording studio, and running his own record label, Young Cub Records. Though DeCristo still returned to LA frequently to engineer Stones Throw Records’ live recording series, Direct to Disc, he and Lalli began dreaming up the idea for SK.

“Dave knows how much I love space, just like he does,” Lalli says. “So he’d send me a blueprint and I’d say, ’Whoa, is the basement really that big?’”

The duo acquired the 71 Main Street space from Mike Labita, who had already been running a recording and rehearsal venture there. Before that, the building housed Michael Poorman and Daryl Rabidoux’s Strangeways Recording, since relocated to Providence, R.I. The space’s unique 18-inch I beams and steel reinforcement recall its origin as a Cadillac dealership.

Art Hop attendees may remember SK as a stripped-down basement with a garage door and BYOB-fueled all-nighters. While the nocturnal shindigs still occur, DeCristo and Lalli have completely redesigned the downstairs, giving the layout more polish and bringing it into compliance with Burlington city code.

“We wanted to have some kind of mainstay and play by the rules,” DeCristo says. “Unfortunately, it took a lot of time and money. But now that it’s done, we can sleep at night.”

Funding for the refurbishments came slowly, via their rehearsal space and marquee shows.

“When I bring someone big up from the city, I can be like, ’All right, we can put in our HVAC now!’” Lalli says, standing beside his gleaming new purchase.

“It looks different every time I go down there,” says Parmaga front man Bryan Parmelee, who, along with bandmate Christopher Shar, is currently recording a full-length album at Signal Kitchen. “Now, I’m not exactly an HVAC specialist or anything,” Parmelee adds, “but, shit, that’s a damn fine-looking HVAC.”

He adds that SK fills a critical need in downtown Burlington, citing the venue as suitable for shows too big for the Monkey House, too small for Higher Ground “and not Nectar-y or Metronome-y enough for Nectar’s or [Club] Metronome.”

Matt Rogers of MSR Presents agrees. Along with Nick Mavodones and Paddy Reagan of Angioplasty Media, Rogers is responsible for a recent influx of outstanding bands that might otherwise skip over the Queen City en route to Montréal, Boston or New York.

“I love Nectar’s, I love Metronome, and I love BCA,” Rogers says, “but it’s nice to have an alternative right downtown. And I think Signal Kitchen fits well with a lot of the stuff I do.”

DeCristo and Lalli recognize their hybrid event space/recording studio provides not only a venue but something unique in the Northeast: a record label with a multimedia approach. Lalli cites labels such as London’s 4AD as an influence.

Videographer Matt Day of Wondermind Pictures contributes significantly to the SK aesthetic. Day, who had previously filmed the Naked Musicians video series, captures each SK concert with a number of HD cameras. DeCristo and Lalli then splice Day’s footage with their recordings to produce promotional material for the bands and the studio. The team suggests its work is exemplary of what new record labels, studios and performing-arts spaces must do to succeed.

Though SK welcomes all, don’t expect to find it too easily. The entrance is a nondescript, unmarked door at the end of an alley. DeCristo and Lalli say they prefer the sign-less, speakeasy style that’s commonplace in New York, designed to keep those out of the know out of the know.

“Nine people out of 10 come up to us every night and tell us to get a sign,” Lalli says. “But the point is no sign.”

Regardless of its discretion, SK is likely to be packed for this week’s Jazz Fest run, as well as its upcoming slates: Brattleboro's King Tuff on Friday, June 15, and R&B/folk cellist Ben Sollee on Friday, June 22. DeCristo and Lalli say they also have big plans for this year’s Art Hop, an event they consider an annual milestone for SK, though their plans remain undisclosed.