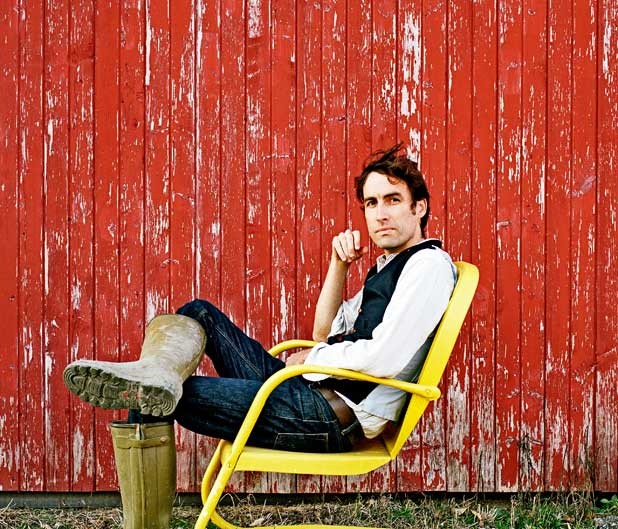 “Enigma” is an overused, and misused, word in modern music journalism. But if ever the term were justly applied, it would be in the curious case of Andrew Bird. The Chicago-based tunesmith crafts sprawling pop suites that defy easy categorization — even by him. The conundrum has led to scads of eyebrow-raising descriptions written by befuddled scribes vainly attempting to pin down his, well, enigmatic sound. But we’ll get to that.

Bird’s latest album, Noble Beast, released earlier this year, is arguably his finest, and has thrust him into an international spotlight. It is a stunning collection, highlighting the classically trained violinist’s unique approach to songwriting and his singular gifts as a performer. In advance of his upcoming performance at Higher Ground, Seven Days caught up with Bird by phone to discuss song craft, taking liberties with language and the near unavoidable journalistic folly inherent in describing his music.

SEVEN DAYS: Does composing on violin differ terribly from writing with a more traditional songwriting instrument such as guitar or piano?

ANDREW BIRD: Usually, I try to write as much as possible without anything in my hands, because whatever you’re playing is going to inform … well, your physical memory kicks in and you fall into certain geometric patterns that the instrument wants. So I usually try to write as much as I can either whistling or singing, in kind of a liquid state. Or gaseous state, I guess. And the whistling or singing is kind of a release valve. But that keeps things more interesting and less inclined to conform to an eight-bar phrase or certain patterns. That being said, I do write more than I used to on the guitar. It’s just so easy to grab a guitar and sit down on the couch and sing and strum away.

SD: It seems as though a lot of your songs are eternally works in progress. Like, you’ll see versions of songs reappearing in different forms on different albums. Do you ever reach a point where you feel a song is completely done, that you’ve taken an idea as far as it can go?

AB: Take a song like “Measuring Cups,” for instance, from The Mysterious Production of Eggs. I did, like, six to seven recorded versions that are drastically different, until I found the one that’s on the record. And since then I’ve never really felt the need to reinvent that … yet. But give it a couple of years and it will be like covering someone else’s song and I’ll look at it differently. But that’s one where I feel, like, “Wow, I think I nailed it on that recording.” But for the most part, on most of my records, I’m not sure that I nailed it. And, whether I did or not, it’s fun in front of an audience to … I don’t know. They’re not finished. So in front of an audience I like to crack ’em open again. In some weird way it maybe involves the audience a little more.

SD: Do you ever set parameters for yourself when you’re writing?

AB: Well, I sometimes might put restrictions on what is in the room while I’m working on a song, what’s within arms’ reach. With Noble Beast, all I had was a textural guideline. I wanted to do some pretty acoustic sounds, to take deep, rich sounds and make it sound like soil, decomposing matter. So there are those kinds of abstract restrictions. Otherwise it’s just paying attention and deciding whether you are making music that you would actually like.

I guess there is also, like, “While I’m working on this record, what am I gonna expose myself to?” Because you can’t always be listening to your own music. When I was driving around Nashville, working on the record, I had two records I was listening to: Kris Kristofferson’s greatest hits record and a Studio One compilation. So you’ve got the acoustic, early ’70s, super-warm sound. And then you’ve got the super-bubbly, warm dub stuff. And those were definitely things, texturally, I wanted to hear.

SD: You had a great quote in an AV Club interview earlier this year [The Onion, January 20] about the deceptive quality of words. From what I understand about the way you approach lyric writing, it’s almost as though a couple of words appear out of the ether and it’s your job to figure out how they connect. Do you ever find that your own words can be deceiving, even to you?

AB: That may be why I tend to favor words I don’t know, or at least are archaic expressions from a different era that you’re supposed to know what they mean, but they can be given this new weight. Sometimes, like in the case of “Sovay,” I took a really old word from an old ballad, which no one really knows what it means and just sort of reappropriated it as a new word because it was kind of beautiful sounding. So, whatever I’m trying to say in this verse is what this word means. I try to avoid the everyday, matter-of-fact language that we use and I feel kind of gets overused and devalued. I’m looking for new words.

SD: And you’re not exactly averse to making them up when you need to. Like, “lacrimae.”

AB: Right. Usually it’s a hybrid of two words, or something in my head that I thought was a word but I found out later wasn’t. Nonetheless, it’s just paying attention again to these kinds of accidents, wires getting crossed in your brain. Paying attention to dreams that you forget you had and start to infuse into your everyday reality. Most of them are somehow accidentally circumventing your everyday, “let’s just get through the day” kind of brain.

SD: You seem to approach your shows with a sort of … I want to say “controlled recklessness.” That must lead to some crazy backfires onstage.

AB: Less than you would expect. I’ve got a pretty good racket going, because failure is part of the show. And once it becomes part of the show, it starts to happen less. Nonetheless, maybe my thumb cramps up and I can’t play that loop on time and have to start over. And the first response from the audience is like, “Uh-oh” … But you’re playing with expectations. Not intentionally, but I’m kind of aware of them. That’s what comedians do. It’s a situation when things don’t go right. What you don’t want is this totally polished show where no one felt anything happen. No one was able to distinguish it from the last night. So, yeah … “controlled recklessness.” It’s fairly controlled. There’s a map for the show, and it doesn’t descend into total free jazz or anything like that. But it’s definitely perilous. And that keeps everyone awake.

SD: Last question. You’ve had some pretty bizarre descriptors attached to your music. It seems like it’s often a case of journalists being a little too clever in trying to peg your sound. As someone who makes a living describing music, I have to tell you that in your case, it’s a tall task. It’s tough to fully explain your music to someone who has never heard it. So I’m wondering if there have been any descriptors, either good ones or, maybe more interestingly, bad ones, that you’ve taken note of?

AB: The worst one I think I’ve heard is “whistle rock.”

AB: That pretty much sums it up, right? Yup, me and Peter, Bjorn and John. Two peas in a pod, right there. I wish I had some clever catchphrase to get me out of awkward conversations in elevators. But I have yet to find one. To end the conversation, I just say, “experimental pop.” But what can you say, really? That’s your job.